For Lenny, "the Life Lovers Outreach Coordinator (Grade G) of the Post-Human Services division of the Staatling-Wapachung Corporation," cheating death appears to be within the realm of possibility; that is, if he can make and save enough money to buy into the (supposed) technology he is selling and "stay off the trans fats and the hooch." Lenny, emulating his boss and mentor, Joshie Goldmann, decides that living forever is his raison d'être, for without eternal life, there is no such thing as a raison d'être - or so goes the rhetoric at Post-Human Services.

Lenny, a 39-year-old American born to Russian émigré parents (much like Shteyngart), with a "so-so body in a world where only an incredible one will do," returns to New York City after a year in Rome, where he has been unsuccessfully seeking out European "High Net Worth Individuals" (HNWIs) as perspective clients for "Indefinite Life Extension." Before returning to the United States, however, he meets a beautiful and much younger Korean-American girl, Eunice Park, at a party in the Italian capital and falls in love with her immediately. Lenny quickly decides that, in addition to eternal life, he must win Eunice's love.

Set in the near future, Super Sad True Love Story presents an all-too-plausible digitized dystopia: Citizens walk around with äppäräti (pl.), small iPhone-like devices, which contain pretty much all of their user's personal information, from their fluctuating credit ratings to their LDL cholesterol levels; one political party rules over the United States, the Bipartisan Party; the U.S. National Guard is being "slaughtered" in a controversial war in Venezuela; China is backing U.S. currency, though is on the verge of calling in its IOUs; the wealthy (HNWIs) are youth-obsessed; and poor New Yorkers (LNWIs) are living in Central Park. Acronyms abound in this bleak future and the reading of literature is, for all intents and purposes, dead: "Less words = more fun!!!" reads a tip on GlobalTeens, the novel's ubiquitous social-networking site.

Although Lenny works in a cutting-edge industry, he is seen as anachronistic for myriad reasons, most notably for his unpopular passion for books. (Unlike in Ray Bradbury's Fahrenheit 451, books aren't illegal in Shteyngart's dystopia; they're just terminally uncool.) After falling for Eunice Park, Lenny finds a literary analogue in Chekhov's "unattractive but decent Laptev, the son of a wealthy Moscow merchant, who is in love with the beautiful and much younger Julia" in the novella Three Years. When Lenny pulls out the Chekhov volume on an airplane, his fellow first-class passengers glare at him and the jock sitting beside him - "a senior Credit ape at LandO'LakesGMFord" (there are many multiple mergers in Shteyngart's future) - says, "Duder, that thing smells like wet socks." Lenny quickly puts the book back in his carry-on, "stowing it far in the overhead bin."

Super Sad True Love Story is told through Lenny's diary entries and transcripts of Eunice's e-mail and chat correspondence from her GlobalTeens account. Eunice, like everyone of her age, is constantly on her äppärät (sing.), shopping and writing family and friends.

Shteyngart shines in these chapters, where he mimics the inventive - though grammatically problematic - ways in which people compose e-mails etc. ("Dear Precious Pony," writes Eunice to her best friend, Jenny Kang, who on GlobalTeens goes by the handle "GRILLBITCH," "Sup, betch?") Although Shteyngart is clearly satirizing social-networking sites and the subliterate messages people post, he also simultaneously celebrates the creative use of language often found in digital communications; Lenny is referred to as a "RAG," for example, on his äppärät, which means "rapidly aging geezer." The crass and creative acronyms in this novel are convincing and hilarious, and, well, sad.

After Chinese Central Banker Li visits the United States and deems it an "unstable, barely governable country presenting grave risk to the international system of corporate governance and exchange mechanisms," it becomes clear that the state is rapidly deteriorating and will soon fold. While political catastrophe is imminent, Lenny tries desperately to connect with Eunice, who has moved into his Lower East Side Co-op and has tentatively developed a romantic relationship with him. Eunice, however, is understandably more concerned about the safety and fate of her family than her relationship with Lenny.

The poor (LNWIs, i.e. "the middle class") challenge the government for not making good on promises to compensate troops who have returned from the war in Venezuela. They are forming collectives in Central Park, and Eunice and her podiatrist father, with whom she has strained relations, decide to offer aid to this small and impoverished movement. The poor, however, are quickly silenced before they can pose a real threat.

By slightly exaggerating and exacerbating the symptoms of our anxious, frenetic and insecure times, Shteyngart creates a frightening world, where problems of connecting, despite technology, exist more than ever. Super Sad True Love Story is a smart, funny and - it is true - sad satire that leaves one worried for the future.

John Goldbach is the author of Selected Blackouts, a collection of short stories. 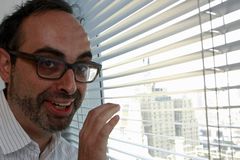