I remember the day I realized that I had read every L.M. Montgomery novel on the shelves of the Camrose Public Library. I went back and checked, and the next week checked again, just in case I had missed a volume. No, I had read everything available in print; and for that week, I occupied, in the words of Anne Shirley, "the depths of despair." Of course, I was only 11.

But there it is, a truth that continues to endure. Every Canadian girl would exult if the papers of Lucy Maud Montgomery were to yield another Anne novel. Although they're old-fashioned and sentimental, it is no surprise that 101 years after the first publication of Anne of Green Gables (1908), readers still yearn for just a few more details of Anne's story.

No character inhabits the first half of 20th-century Canadian literature more inexorably than Anne Shirley, she of the carroty hair and the exorbitant imagination. Anne occupies what can only be called the sweet spot in Canadian literature, haloed and honoured, our very own benign monster.

Her creator, Lucy Maud Montgomery, demands almost as much literary attention. Montgomery is that hybrid Canadian writer: orphan and schoolteacher, minister's wife and prolific scribbler. Herself a fascinating character, she is peculiarly associated, in my mind, anyway, with unhappy Mrs. Bentley of Sinclair Ross's As for Me and My House. Her sudden death caused speculation about suicide, and she certainly didn't have much fun with her often-depressed husband, Ewan Macdonald.

But she wrote her fingers to the bone. The author of more than 500 short stories, 20 novels and innumerable articles and poems, she is also the inventor of a community zeitgeist that has turned the house that inspired Green Gables into a historic site and made Anne the global subject of musicals and plays, films and postage stamps and pigtailed wigs.

What did she think of her creation, Lucy Maud Montgomery? Did she sometimes rue that day she invented her charming Frankenstein? Or does she now chuckle at her resilience, how Anne has legged it straight through the 20th century into the 21st?

In search of further evidence on Anne, Montgomery's papers have been mined and sifted, microscopically examined and forensically dissected. And yes, there are discoveries to be made, perhaps thinly stretched as "new," but nevertheless interesting additions to the overall narrative of a character so familiar that we suspect she lives next door.

The Blythes are Quoted is such a discovery. It is the very last book L.M. Montgomery completed; Elizabeth Rollins Epperly's foreword indicates that the typescript was delivered to the publisher on the very day the author died, April 24, 1942. But although mentioned in her obituary in The Globe and Mail, the book did not appear until 1974, when it was published in expurgated form as The Road to Yesterday.

In 1999, critic Benjamin Lefebvre reopened those files and found that the poems and stories that had been excised from the earlier edition suggested an entirely different aspect to Montgomery's writing. He set out, using the three typescripts held in the archives, to restore the manuscript to the form intended by Montgomery. Lefebvre's patient and meticulous scholarship has resulted in this fascinating volume, a gift to insatiable followers of Anne Shirley's story.

The Blythes are Quoted collects 27 short stories about different characters from communities that we recognize as part of Montgomery's map of Prince Edward Island. They are interspersed with poems "authored" by Anne Blythe and her son, Walter Blythe, and accompanied by vignette-like commentaries on those poems from members of Anne's family. These dialogues reflect the Blythe family's memories and cognizance, thus recording an intimate conversation that resonates beyond their circle. More important, they shape this book into an allegory channelled by the medium of sorrow.

Of course, we know that Anne Shirley became Anne Blythe, having married the redoubtable Gilbert, and that together they had a robust family, although their first child died at birth, and their son Walter was killed in the Great War.

It is Walter's poetic voice, alongside Anne's, that frames this collection, making it less a sunny-side-up Anne redux than a multifaceted ghost story, and a subtle condemnation of the destructiveness of war. The first half of the book deals with life before the First World War, and the second half deals with life after that war, right up to the Second World War, with one of the characters in the last story falling in love just before he sails away with his battalion.

The disparate stories themselves, while often resolved with predictably happy endings and mawkish proposals, demonstrate a darker subtext, surprising to those who assign to Montgomery a Victorian felicity. They take up the underside of social amiability: lies and secrets, grievances and deception, murder and madness. They are compelling because they recognize that humans are capable of perfidy, and that beneath the smooth surface of respectable piety lurks imperfection, even wickedness.

But most fascinating, for all its passive awkwardness of phrase, is the way that this book plays with its title: The Blythes are Quoted. Every story, while none uses the Blythes as principle characters, contrives to register commentary on the Blythes (known to all!), reportage of what the Blythes do or have said, their opinions and influence serving as meta-text to the lives of others.

These repetitions of the assessments and attitudes of Anne, Gilbert and their children suggest not only the mirror of an ideal community standard, but possibly insinuate a tongue-in-cheek irony on the part of their author. Montgomery was probably both heartily sick of her Anne-creature and aware that she would forever be lauded for having invented her. This last book may have signalled her resigned acceptance of how Anne Blythe cited her life as much as she quoted Anne's.

That said, this re-acquaintance with the voice of L.M. Montgomery is marvellously satisfying, and Benjamin Lefebvre is to be thanked. Reading The Blythes are Quoted, I felt again my 11-year-old self, happy to have discovered a new Anne story, even one so much sadder and wiser than its original.

Aritha van Herk read all of the works of L.M. Montgomery in the winter of her 11th year. She lives in Calgary, far from Prince Edward Island.

Review: When I Always Wanted Something, by Carole Glasser Langille
November 13, 2009 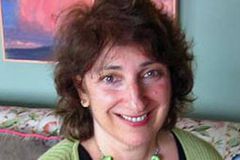