Midway through Katherine Govier's The Ghost Brush, Oei, the daughter of the great Japanese printmaker Katsushika Hokusai, is speaking to Dutch physician Franz Von Siebold. The conversation turns to Shakespeare. She inquires about whether the great dramatist had a daughter who made his work possible through her care and whom the master taught. Von Siebold tells Oei there is nothing known of Shakespeare's daughter.

Oei is stunned, "I had not imagined a great life for her. Only a little one. But not that fate. To be utterly unknown … to have one's very existence in question."

Sadly, Oei may have been speaking of herself, for compared to the fame of her father, Oei is unknown. Govier's expansive historical novel turns the spotlight on Oei, the "ghost brush" attributed to some of her father's famous prints, and a character that drives a compulsively readable novel.

Hokusai's iconic woodblock print, The Great Wave off Kanagawa, with its stylized wave framing a distant Mount Fuji, encapsulates many of the threads running through The Ghost Brush. Japan, during the course of the story, resists the waves of change brought about by the arrival of foreigners and the instability of the Shogun regime. Beneath the great wave toil the tiny men in the fishing barges, like the ordinary Japanese, who are supported by the rigid structure of Japanese life, but also swallowed up and nearly drowned by it - and like Oei, who is loved furiously by her father, while her talent is smothered by his fame and longevity.

The Ghost Brush is set in 19th-century Tokyo (Edo). Hokusai, perpetually broke, but preternaturally content, is one of the ukiyo-e or artists of everyday life (literally, the "floating world") who must constantly manoeuvre around the censorship of the repressive Shogun regime. Upon seeing Oei as a baby, with her outsize chin and large ears, he takes the child as his special one, carrying her everywhere and educating her, first in the grim realities of life and then as an artist.

Much of the girl's childhood is spent in Yoshiwara, the pleasure district of Edo, among the brothels, the courtesans and their varied clientele. Oei is not shielded from any of the gross truths of life among the downtrodden, the bohemian and in the case of the courtesans, the enslaved. She wanders unattended through the tenement brothels and is befriended by an apprentice courtesan, Shino. Of noble birth, Shino was sold by her husband to the brothel as punishment for raising her hand in defiance.

As Oei matures, her strange coming of age pushes her further and further from the genteel ideal of femininity in Japan. She divorces an ineffectual husband, takes lovers, smokes and drinks and after her father suffers a stroke, takes on more and more of his work, becoming the ghost brush of the title. But despite her counterculture upbringing, strong will and artistic talent, Oei will never emerge from the shadow cast by Hokusai. Japanese society will not let her and ultimately she will not let herself. Oei is a likeable, fully imagined character who drives the novel, which otherwise may have suffered under the weight of prodigious research and historical detail.

Govier missteps only very occasionally, when she makes the theme of the repression of women too explicit in narrative passages. "What sort of people were we to invent this class of women solely formed to please a man. … Who were we to force them to be supplicant?" But these missteps can be overlooked easily in the presence of some beautiful prose. Watching her father play like a child in the waves, Oei thinks, "I knew that I would always watch him tumble, would always think the ground underneath me tumbled just as the waves did. I would face the tumult scanning for the shadow man I loved."

Oei, speaking again to Von Siebold, discusses the shifting perspectives of Mount Fuji. Govier's novel is a bit like Fuji. At some points, the novel seems to be about issues of authorship; at others, it is a very sophisticated soap opera, and sometimes it is a simple story of the bond between father and daughter.

And like the many views of Mount Fuji, each theme is successful in its own way.

Catherine Hanrahan is the author of Lost Girls and Love Hotels, a novel set in contemporary Tokyo. 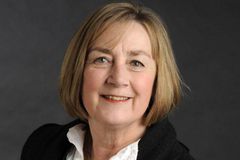