The cover of Sarah Selecky's debut fiction collection is striking in its insistence upon ruin, lack and nostalgia: A jaggedly reassembled smashed plate is home to a cluster of crumbs, a consumption-smeared fork and the counter-insistent title declaration, This Cake is for the Party.

And while the collection explores sites of emotional and physical volatility, Selecky sinks her teeth into something far more powerful than the violence of loss: She skillfully wrests devastation from its customary gloom of lamentation and regret, and bares its overwhelming beauty.

Each of the 10 sharply cinched tales within This Cake pivots around this powerful inversion; and as Selecky demonstrates, the blight of antitheses - the party that is not one - is most often the stuff of celebration.

This idea is richly rendered in This Cake's potent closer, One Thousand Wax Buddhas, a ruminative piece that tracks the variously mundane and poignant moments preceding the tragedy with which Keane and wife, Robin, have been confronted. In his attempts to make sense of the current cataclysm, Keane recounts an eerie parallel, a long-ago instance wherein he had mistaken exquisiteness for disaster:

"[Robin had]broken everything that could have been broken. Our plates and bowls, our glasses, the mirrors and picture frames. … She'd constructed a massive sculpture from the shards of everything we'd ever collected in our life together. It moved from translucent blues and greens to opaque colours that shifted into a rainbow, with white in the centre of the spiral. It covered most of the house."

At first, Keane sees only destruction. "Everything's broken," he says.

Robin "eye[s]rdquo; him "with laser precision," and says simply, "You aren't looking."

Keane learns to shift the gears of his gaze, and the revelation that he experiences is what makes possible his ability to understand he and Robin's current situation with incisive effect: "Eventually, I saw that she was right. It was more than a mess. It was beautiful. Sure, I was frightened when I saw it at first, but that was only because I was attached to all of the things when they were in their unbroken form. When I was able to see what she'd done, when she showed me how to look, I could see it: all the broken things were just things. She'd created something else. … It pointed to something much bigger, something far beyond things."

Indeed, Selecky catches each of her characters in the midst of acute crises and keenly extracts the stories behind the stories we tell ourselves. Our capacity for vision depends upon our ability to look again - to see the cake that is not one.

The arresting coming-of-age piece Where Are You Coming From, Sweetheart? opens in a transitory blind spot. Fourteen-year-old Christine is grudgingly homeward-bound on a Greyhound, having spent the weekend with her aunt and cousin in Mississauga. While Christine engages her virgin lips with the "smoky, apple-sticky tongue" of a strange man at the back of the bus and further hatches her plans to leave home, her father - a wildly controlling, fanatically religious shell of a man mired by the decade-old death of his wife - passes away. After her father's death, Christine's sight moves beyond the limited realm of the worldly - "When he spoke, his teeth were just bones in his mouth" - to a realm of unadulterated possibility, a victory that she shares with her deceased father.

Standing Up for Janey, for example, invites readers to a harrowingly awkward (read: utterly hilarious) dinner party thrown by Bonnie in honour of soon-to-be-married best friend, Janey. Shortly before the party begins, Janey confesses that she has been cheating on her unsuspecting fiancé, Milt: "I was always going to be an ironic bride," she tells Bonnie. Witness Milt's gullible love and Janey's wine-soaked look of infatuated elsewhere. Cringe as Milt's suspicious sister, Becky, corners Bonnie in the kitchen, allegations in tow. Shudder at the thorny small talk that makes its way around the table. Writhe as Bonnie attempts to covertly dislodge a crumb from her molar, and manage not only her guests but the sudden arrival of her drunk ex-fiancé, David.

The lush landscape of This Cake is furthered by Selecky's stunning exaction of imagery. An exposed shoulder is "a sweet bend of skin like a section of an orange" ( Wax Buddhas). Breath is "a rash" ( Prognosis). Voices are "fruit soaked in liquor" ( Janey). Orchids are "the colour of an infected throat" ( How Healthy). And words are spoken like "carefully" played "Scrabble tile[s]rdquo; ( Watching Atlas).

Sarah Selecky and the decade she put into her book
November 2, 2010 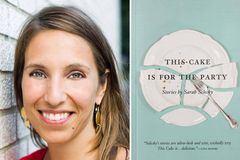