In this era when book reviews are too often replaced with plot summaries, let me ask a favour: I'd rather not spend much time telling you what happens in Yann Martel's new novel. Which isn't to say its plot isn't interesting – it is, and I'll inevitably refer to its machinations in what follows here. But some books, and this is one of them, are very hard to explain effectively; some books are done a disservice by being so described.

So, the bare bones of this gleefully bizarre, genuinely thrilling and entirely heartbreaking novel: in its first section, set in 1904, a grieving young man named Tomas takes an epic road trip in search of a religious relic; in the second, set 35 years later, an older man, a pathologist named Eusebio, has a long conversation with his wife about the relationship between the gospels and Agatha Christie novels, and then performs a profound yet surreal autopsy at the request of a stranger; in the third, set 50 years after that, an old man, this time a Canadian senator named Peter, retires to Portugal in the company of a chimpanzee acquaintance.

It sounds a bit silly, but it's not. The sections are essentially novellas stacked on top of each other, and while the action within them is related in loose but satisfying ways, they work more like a palimpsest, with the shape of the first still faintly visible through the third. When thought of that way, the metaphysical connections they share become much fuller than the thin tethers that link their plots. For while The High Mountains of Portugal is an exuberantly narrative novel, it is even more so a contemplative, philosophical one.

Its central question: how do you solve the mystery of death? Or, as the pathologist's wife puts it, "murder mysteries are always resolved in the end, the mystery neatly dispelled. We must do the same with death in our lives: resolve it, give it meaning, put it into context, however hard that might be." In other words, how do we live through it?

Through this lens, the book's sections become thought experiments, each one offering a different vision of how to survive loss. Evolution, a theme throughout on several levels, is implied by the section titles – Homeless, Homeward, Home – and indeed each reimagines what came before, piling on further thought and experience, until something like actualization is reached. When it comes – and I'm reluctant to reveal the shape it takes – it is terrifying and beautiful.

This searching, this improving, is built into the book's prose, reminding us of how subtle and elegant a craftsman Martel is. (Writers of such capacious imagination rarely get enough credit for their sheer abilities as makers and manipulators of sentences; it's always easier to notice the clever new shape of something than the construction of it.) In the novel's first section, the writing carries the undeniable energy of youth, marked by an almost overzealous sense of hurrying and hurtling along. It has no peace.

The book's middle is essentially dialectic – a miniature enactment of the conversational exchanges of life by which we sharpen and refine ourselves. Its final part is written with profound clarity and calm, as though, having moved through sadness with the characters, having tested our ideas alongside them, we have arrived at a place of tranquillity. We become, over the course of the book, more mature, and more equipped to face the tragedies life will inevitably bring us.

Thus the consuming anguish of youth – "[Tomas] feels upset in the same way, filled with that same acute sense of dread, aching loneliness, and helplessness. So he weeps and he pants, grief in competition with simmering panic" – becomes the peaceful acceptance of age: "Does it bother [Peter] that the ape is essentially unknowable? No, it doesn't. There's reward in the mystery, an enduring amazement … He accepts it with gratitude."

It is a testament to the book's ambition, and Martel's novelistic abilities, that this evolution seeks to better the reader while also denying him or her any comprehensive sense of resolution – it refuses to conflate maturity with certitude, and in a sense insists on ambiguity. High Mountains resists the reader at every turn in the most pleasing way possible: it does not seek to offer you absolute truth, though it contains much wisdom; instead, it seeks to evade you, and in doing so deepens your sense of its mysteries, and the mysteries of the world we share with it.

While reading, I thought often of those startling works of architecture that seem to destroy physics, the buildings that make complete sense when you look at them despite the fact that you could never explain how they're able to stand up. The ones that defy logic and seem to float on faith.

Or, to borrow another metaphor, it's as though the book is a piece of music, a big one with themes and leitmotifs and choruses echoing and layering to produce a symphonic grandeur that is deeply experiential, both of the moment and above it. I borrow that metaphor from Martel himself, who plants it early in the book during a clever description of an automobile that just as accurately describes the ways in which he summons the elements of his craft to produce a piece of art greater than the sum of its parts:

"I hope you are aware that what you have before your eyes is a highly trained orchestra, and it plays the most lovely symphony. The pitch of the piece is pleasingly variable, the timbre dark but brilliant, the melody simple yet soaring, and the tempo lies between vivace and presto, although it does a fine adagio. When I am the conductor of this orchestra, what I hear is a glorious music."

Jared Bland is the editor of Globe Arts.

Can Yann Martel emerge from the shadow of Life of Pi?
January 29, 2016 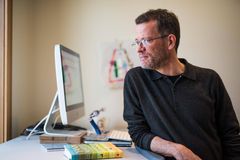