Money is an odd and complex subject to a writer. In America, at least, probably few people get into the writing racket because of the money – I'll bet not even John Grisham. And for the guys I've always hung around with, we got into it because we wanted to write a really good book that people would read and be changed by for the better. If that occurred, possibly money would follow along – although how that would happen wasn't very clear, and probably it wouldn't happen no matter what we did. The old adage of Samuel Johnson's that says anybody who writes for any reason other than money is a nitwit, was a status I had to hope would become true of me, before which time I had to try not minding being a nitwit.

The first book I ever wrote sold to its New York publisher for the sum of $3,500 – which didn't seem like a lot of money, even in 1975. It mattered a great deal more to me that my novel would be published and possibly read than that somebody paid me for it. My wife and I felt like the money was more of a one-time windfall than anything resembling real "earnings." We certainly had no thought that it portended more money would ever come our way. Although, we knew what to do with it. We drove to Mexico and lived off of it as long as we could (which wasn't long), and tried to feel as much as possible like Hemingway and Hadley in Pamplona or wherever they had been – eating and drinking cheap, having a good time, picking up cheques at the American Express office – while I factored up the fantasy of myself being a "working writer," which wasn't very persuasive. The money felt like what we Americans call "funny money": cash you find in a shoebox inside the closet of a house you rented, and promptly blew on drugs or a vintage Porsche or a new sound system, knowing you'd never get it again so why save it? It was real money, okay. But it wasn't "serious money." That, you got from a job. And writing wasn't really a job. It was more of a lark. It was art for art's sake. Not art for money's sake.

This idyll of my youth still affects me as being sweet and true. And during the 35 years of my writing life, it has lain at the origin of how I feel about money, and specifically about money I've made writing novels and short stories and essays. In my estimation, I've made quite a lot of money being a writer. (I don't want to total it up; I might be wrong.) And that's over a writing career that has never been meteoric – although I'm happy with all of it, since I've gotten to do what I've wanted, unimpeded. I'm fairly sure I've made more than all my publishers, which doesn't seem right, or even explicable. I've made enough to keep from having to work at other jobs, or from becoming a college-professor-who-also-writes, or a slave to cruelly pointless magazine assignments.

It should be said that my wife has always had a "real career," and has brought home money fairly regularly, although never a king's ransom. And it should also be said that we didn't have children, those non-essential creatures who make money disappear in a way that can only be described as "viral."

Professional athletes are sometimes quoted in interviews as saying, "I can't believe someone's paying me to do this. I'd do it for nothing." I've never quite believed that. But I've occasionally felt vaguely that way about writing. It isn't very hard to do, and it can sometimes feel pleasurable. This was a feeling I had when I was younger, of course. At 67, I'm not sure I'd do it now if somebody wasn't paying me (although no one's paying me very much for writing this, which is probably reasonable).

But with less time lying out in front of me these days, other activities have begun to seem more attractive.

In truth, I don't know what I'd do differently if I had a lot more money. My house is paid for and so is my car. I don't owe anybody anything. I don't even want a vintage Porsche any more. As a son of Depression-era parents, I don't mind saying these prosaic facts of life make me uncommonly happy – as happy as writing makes me. My wife, who is a great beauty and a former model, likes nice clothes; but we have money enough for that. I have a really wonderful motorcycle, but it's 23 years old. And my car that's paid for, I bought "used."

Oh, when I read about writers being picked by Oprah or winning an Oscar when they've tried their hand at screenwriting – and I find out that a big truck has backed into their driveway and unloaded millions – I admit I'd like to know what that feels like. (It probably feels like going sky-diving knowing God's promised you're going to land safely.) I'm happy for those writers – my good colleagues. I'm happy if they're happy, and I hope they are, and that all that money doesn't ruin their lives and cause them to get divorced and be miserable.

Of course, the thing about writing is that you can't ever count yourself out. And I don't. That big truck may be looking for my address right now, which would be wonderful. I'll leave the light on. I'm sure it wouldn't ruin me.

So, as I said, it's an odd and complicated old business, money. I've always liked the adage that Samuel Johnson apparently didn't say (Louis B. Mayer, that old scamp, probably said it): "If anybody ever says it's not the money, it's the money." Which means nobody much tells the truth about money – not the whole truth, anyway. Which is why it's both the source of so much giddy fun and also the root of all evil. We both love and hate it enough to lie about it. What could be more human? More … well … writerly?

Richard Ford is a novelist. His new novel, Canada, will be published in 2012 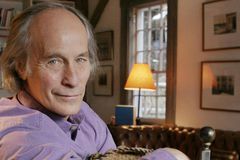