Reviewed by Stephen Amidon
Special to The Globe and Mail
Published September 10, 2010 Updated May 2, 2018

Emma Donoghue's fine new novel appears to find its inspiration from some recent high-profile cases in which young women were abducted and abused for almost incomprehensible periods of time. From 14-year-old Elizabeth Smart of Utah, who was held for nine months, to Elisabeth Fritzl in Austria, who was imprisoned by her father for 24 years, these cases stir the imagination not just for their brutality, but also for their mind-boggling duration. How could a personality remain intact during such a prolonged ordeal?

One of the many virtues of Room - the London, Ont., resident's book has just been short-listed for this year's Man Booker Prize - is how it addresses this question by reminding us of not just the terror, but also the daily tedium and the resilient humanity of the victims. The story opens quietly, almost sweetly, as a boy named Jack celebrates his fifth birthday with his unnamed mother. The two seem uncommonly close - Jack still breastfeeds - and there is not much money for gifts. Otherwise, nothing seems out of the ordinary.

Gradually, however, the terrible reality of their situation becomes clear: They are being held prisoner in a small room by a menacing figure known only as Old Nick. Jack has been locked inside without interruption since his mother gave birth to him on the dirty rug, while she has been held captive since she was abducted from her university two years before Jack's birth. Old Nick - who is, of course, the boy's father - gives no indication that he ever intends to release them alive.

What gives the novel its startling authenticity is Donoghue's bold decision to tell the story through Jack's eyes. The lyrical innocence of his narration makes their predicament all the more gripping. While an adult storyteller would render the tale in tones reminiscent of Poe or Thomas Harris, Jack sees his squalid little cell as a place of wonder that is every bit as radiant as Wordsworth's meadow, grove and stream. "God's yellow face isn't coming in today," he explains when clouds cover the sun that briefly appears most days in the room's sealed skylight.

For Jack, common objects are infused with numinous power. "Plant used to live on Table but God's face burned a leaf of her off," he explains.]What's more, he does not comprehend the notion of an outside world, and so cannot feel the magnitude of his isolation in the same way as his mother. For Jack, what is inside his room is real; everything else "is TV," or make-believe.

Of course, the room is not only idyllic. During Old Nick's nighttime visits, Jack cowers in a wardrobe, where he counts in anguish how many times "Old Nick creaks Bed."]Sometimes, after the kidnapper departs from their DIY dungeon, his mother will lapse into day-long depressions that cause Jack to say simply that "Ma is Gone."

Everything changes when, in a remarkably well-rendered sequence, they manage to break free of their prison. Elation gives way to confusion, however, as they are forced cope with a vast, clamorous new world, a process that is complicated by their instant notoriety. "In Room I was safe and Outside is the scary," Jack baldly states.]Although their earlier life was horrific, it also provided both mother and child with a strong sense of identity that proves hard to jettison. "I'm not in Room," Jack thinks at one point. "Am I still me?"

The re-introduction of this pair of innocents into society provides Donoghue with the opportunity for some fine satire. Immediately after their escape, Jack and his mother are institutionalized by well-meaning but overbearing doctors who unwittingly replace one form of incarceration with another. There is a harrowing sequence in which "Ma" is grilled by a talk-show host who disapproves of the young mother's decision to keep Jack in the room with her rather than bargain with their captor to set him free. "It wasn't an ordeal to Jack," the mother pleads to deaf ears, "it was just how things were."

The book's latter half also provides the opportunity for some welcome comedy, particularly Jack's inaugural trip to a mall with his five-year-old cousin Bronwyn, a spoiled brat who proves to be years behind Jack developmentally. She did not, after all, have the advantages of a parent's unwavering attention.

Despite these skillfully drawn elements, the book's second half is less effective than its first. Perhaps this is inevitable given the changed circumstances of the protagonists. The walls that enclosed them also intensified their drama. Later, as paparazzi chase them and relatives advise them just to get on with their lives, the reader can almost sympathize with their occasional hunger to return to their tin womb. Looked at from just the right angle, even hell can seem to be a paradise lost.

Stephen Amidon is the co-author, with his brother Dr. Thomas Amidon, of the forthcoming The Sublime Engine, a biography of the human heart. 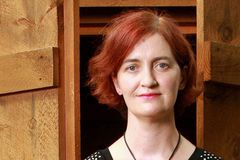