A former employee of Penguin Canada has launched a $523,000 lawsuit alleging that company CEO David Davidar sexually harassed her repeatedly over the past three years, culminating in outright assault at the Frankfurt Book Fair last fall, and that she was fired after complaining to superiors about Davidar's "twisted treatment" of her.

Lisa Rundle of Toronto, former director of digital publishing and foreign rights for Penguin Canada, is claiming damages of $423,000 from Penguin for wrongful dismissal and the "harsh, vindictive and malicious fashion" with which it allegedly treated her following her complaints against Mr. Davidar. She is also seeking damages of $100,000 against Mr. Davidar personally.

The allegations were made in a statement of claim filed with the Ontario Superior Court of Justice on June 9, the day after Penguin Group chairman John Makinson and Mr. Davidar jointly announced the latter's decision to leave one of the top jobs in the international company. They have not been proven in court and Mr. Davidar has not yet filed his defence.

In response, the former executive issued a statement Friday afternoon denying the harassment charges - but acknowledging that neither he nor Mr. Makinson had revealed the full story surrounding his departure earlier this week. "At Penguin's request, I agreed to publicly state that my departure was voluntary," he wrote. "The truth is that a former colleague accused me of sexual harassment and Penguin terminated my employment."

Mr. Davidar said he intends to fight the charges "vigorously," but declined to make further comments.

In the aftermath of the court filing, Penguin Canada also released a terse statement correcting the misleading impression Mr. Davidar had quit of his own accord. "Mr. Davidar was asked to leave the company last month and his departure was announced on June 8," it said. "Mr. Davidar will play no further role in the company."

The company did not state a reason for Mr. Davidar's termination. It did, however, contradict Ms. Rundle's claim that she was fired for complaining about Mr. Davidar's "harassing and vexatious behaviour."

"Ms. Rundle was not terminated by Penguin Canada, but rather she advised the company of her decision to leave after having declined to pursue other career opportunities within the organization," it said.

Ms. Rundle offers a sharply different account of the events in her statement of claim. "Terminating Lisa for bringing to the table her complaints about the sexual harassment and sexual assault she suffered at the hands of Davidar is particularly reprehensible conduct on the part of the company," it said.

The accusations are accompanied by quotations from several e-mail messages Mr. Davidar allegedly sent to Ms. Rundle during the period in question. Last year, he is said to have written that he "could do very little except think of [Ms. Rundle]" that she was "utterly gorgeous," "a vision in pink sipping a champagne cocktail," and that she should not be "stubborn" or "fight" him.

"Davidar over time became more and more intense with his persistent protestations of lust and desire for Lisa," according to the claim, "and in return she became increasingly disturbed and afraid."

The harassment allegedly culminated in an outright assault at the Frankfurt Book Fair last October when, according to the claim, Mr. Davidar appeared at Ms. Rundle's hotel room door, "wearing excessive cologne, with buttons on his shirt undone down his waist."

"Lisa stood in her hotel room into which Davidar had bullied his way, with her arms crossed, still near the door, and asked what he needed to discuss," it said. "He told her to relax and just let him come in. She refused and said she wanted to go to sleep."

Ms. Rundle claims she climbed on a windowsill to avoid her boss and again asked him to leave. "He forcibly pulled her off the ledge and grabbed her by the wrists, forcing his tongue into her mouth," it said.

Until this week, Mr. Davidar was widely regarded as the golden boy of the Canadian publishing industry, leaving many in that close-knit community dumbfounded by his sudden departure. In January, Mr. Makinson promoted him to head of Penguin International, a new division overseeing the company's activities in South Africa, India and the Middle East. Many speculated he was being groomed to succeed Mr. Makinson as chairman of the worldwide Penguin Group.

Davidar forced out of Penguin Canada amid sexual harassment suit
May 2, 2018 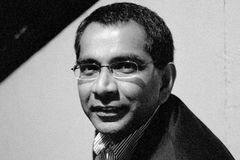