Lorenz Hart is "the laziest of the pre-eminent lyricists." Ira Gershwin's lyrics are "clenched" and "too often convoluted," while Alan Jay Lerner's "lack energy and flavour and passion." As for Noel Coward, he isn't The Master; he's "The Master of Blather."

These are just a few of the wonderfully frank assessments of fellow famous lyricists that Stephen Sondheim offers up in Finishing the Hat, the first volume of his collected lyrics, in stores this week.

The hefty tome includes every line the Pulitzer Prize-winning composer/lyricist wrote for or cut from his stage musicals from 1954 to 1981, a period that begins with Saturday Night and ends with Merrily We Roll Along. (The subsequent lyrics will come in a later volume.)

What will be most fascinating to Sondheim's legions of devotees to peruse, however, are his - to quote the subtitle - "attendant comments, principles, heresies, grudges, whines and anecdotes." The recently minted octogenarian outlines his lyric-writing philosophy - the reason behind his rhymes - and takes many of the most esteemed lyricists from the Golden Age of musical theatre to task for mis-stressed syllables, convoluted syntax and occasional verbosity.

"I'm going to London and I'm ready for the flak about Noel Coward and W.S. Gilbert," Sondheim says over the phone from New York, his life-long home. "I expect bombs to be detonated."

Any lyricist who is no longer breathing is fair game in the book. Even Sondheim's mentor, Oscar Hammerstein II, doesn't emerge entirely unscathed, with his occasional lapses into overblown imagery or nonsensical poetry lovingly critiqued.

Take the opening line Nellie Forbush sings in A Cockeyed Optimist from Rodgers and Hammerstein's 1949 Pulitzer-winning musical South Pacific: "When is a sky a bright canary yellow/ I forget every cloud I've ever seen."

The lyrics Sondheim examines most closely under the microscope, however, are his own. In footnotes, he provides brutally honest rebukes of his own "sins," whether clumsiness or "redundant adjectival padding" that he detects in even his most-admired works - West Side Story, Gypsy, Company and Sweeney Todd. (He writes that he still blushes about Maria singing: "It's alarming how charming I feel" in West Side Story's I Feel Pretty because it "drew attention to the lyric writer rather than the character.")

Finishing the Hat is as interesting to read for its praise as for its jabs at past lyricists, however. In the process of considering the best work of Hammerstein, DuBose Heyward ( Porgy and Bess), E.Y. Harburg ( Finian's Rainbow, The Wizard of Oz), Dorothy Fields ( Sweet Charity), Frank Loesser ( Guys and Dolls) and Irving Berlin ( Annie Get Your Gun), Sondheim delivers a master class in how to craft clear lyrics that serve storytelling and character.

But to what end? While Sondheim clearly loves his "small and specialized art form," he sounds extremely pessimistic about its future. In his introduction, the Tony-, Oscar- and Grammy-winning composer calls musical theatre a "cottage industry with fewer new cottages and more refurbished ones every season." He even suggests theatre as a whole is endangered: "I used to think that the need for live theatre would never die; I fear I was wrong."

Sondheim tempers his doom-saying a tad over the phone. "It's not that I think it's going to die," he says. "It's just that so much of the world is being taken over with passive art having to do with the Internet and all kinds of electronic entertainment and pastimes."

But in terms of the commercial future of musical theatre, he sees mostly "concerts" and variety shows - a cycle back to the days before the sophisticated, integrated musicals Hammerstein pioneered. "The proliferation of jukebox musicals is an example of how storytelling is becoming less important," he says.

If the book makes it seem as if Sondheim is the last of a dying breed, much of that comes from the author's refusal to discuss today's generation of talented lyricists, such as Next to Normal's Brian Yorkey or The Light in the Piazza's Adam Guettel or Hairspray's Marc Shaiman and Scott Wittman.

Sondheim refuses to comment on current writers even in an interview. "If I mention somebody, then the people I don't mention will get hurt," he says. "You say A is terrific, then what happens to B, C, D and E? What do they think?"

He will make a slight exception for movie musicals, though, and confirms that he loved South Park: Bigger, Longer & Uncut, with songs such as Blame Canada and Kyle's Mom Is a Bitch. (The lyrics for those songs were written by Shaiman along with South Park's Trey Parker and Matt Stone). "Oh, yes, I think South Park Uncut is just terrific, and the numbers in it are wonderful," Sondheim says.

As for comment on any contemporary stage lyrics, we're just going to have to hope that Sondheim lives another 80 years and delivers a third volume of Finishing the Hat.

An excerpt from Stephen Sondheim's "Finishing The Hat"
May 2, 2018 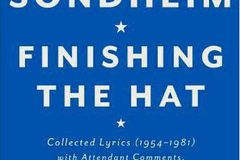