James Houston is one of the authors Douglas Gibson writes about in Stories About Storytellers. Asked to introduce Houston and a couple of other authors at a Calgary WordFest panel, Gibson told the audience a bit about Houston's life as an "artist, author, hunter, and igloo dweller." Houston then stood up in front of 300 Calgary teenagers, and said, "I'm a really old guy. And I've had a hell of an interesting life!"

He was the panelist the kids had questions for afterward. "Apart, that is, from a thoughtful girl," who came up to Gibson privately to ask him, "How do I get to do what you do?"

Gibson was one of Canada's foremost editors and publishers for more than 40 years before he retired from McClelland & Stewart in 2009; his imprint, Douglas Gibson Books, lives on. In this collection of essays, he shares some of the stories he has been part of as editor and publisher of great Canadian authors and public figures, from Harold Horwood, Morley Callaghan and Charles Ritchie to Peter C. Newman, Bob Hunter and Val Ross, not to mention a pride of politicians, including John Diefenbaker, Brian Mulroney, Jean Chrétien and Paul Martin, as well as Pierre Trudeau.

He begins with Stephen Leacock, whose humorous stories inspired the young Scot to set his sights on emigrating to Canada. The two never met (Leacock died in 1944, the year Gibson was born), but the young man does make it to Canada in 1967, as he relates in the opening essay, which then spends some time on Leacock's biographer, David M. Legate, on McGill University and on Montreal.

If the chapter title led me to expect more about Leacock himself, it soon becomes clear that Stories about Storytellers is Gibson's memoir, centred on authors whose work he has edited and published. In taking us behind the scenes at some of the key – and some of the comical – moments in Canadian publishing history, he chronicles his own discovery of Canada.

He was close to Hugh MacLennan, a novelist he considers unjustly neglected today, and a friend before Gibson became his publisher. What Gibson appreciates most is MacLennan's "sense of democracy – of liking and respect for ordinary people" – and his affection for the doomed miners in Each Man's Son.

This is the chapter that inspires Gibson to write about his own Scottish family, who were "anything but 'idle rich.' No and no." His father abhorred the class system and snobbery, and Gibson credits this background and training with helping him, in his career, deal with all manner of Canadians: "I am my father's son." Of all MacLennan's novels, Each Man's Son is the one Gibson finds the most moving, "perhaps best read to the sound of distant bagpipes."

Barry Broadfoot's Ten Lost Years (1973), about Canadians' experiences during the Great Depression, was one of the first Canadian books I read when I decided to make my own life here. How fascinating, therefore, to read the inside story of the way that hundreds of interviews Broadfoot had taped with ordinary Canadians were transformed into a phenomenally successful book.

The chapter on Mavis Gallant includes a long digression on Jack McClelland before moving on to Gibson's own "humiliation" at Gallant's hands at a Montreal event I happen to have had a hand in organizing. It's an amusing story of Gallant reading for longer than planned – and of Gibson failing to get her to stop.

Full disclosure: When I discovered a reference to me as a "friend" here (and in the acknowledgments) – though I have never had a meal, or even a drink, with Gibson and was not consulted on his book in any way – I offered to withdraw from reviewing the book. My editor replied, "It would be impossible for anyone who's spent any time at all in Canada's books world not to have crossed paths, and sometimes swords, with Doug Gibson."

Gibson is an engaging and on the whole a modest figure and a very fine raconteur. He, too, has had a hell of an interesting life. His book makes for good reading, and he makes his life in publishing sound like great fun, which is how he must have come across to that Calgary teenager who wanted to know how to do what he did.

Stories from the centre of Canadian literature
October 28, 2011 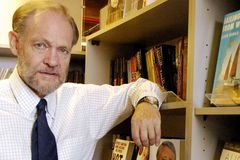