A few years back, while travelling around Amsterdam, I was struck by the speed and efficiency of the light-rail transit system. Next streetcar: 1 minute 30 seconds. And there it was.

In Singapore, the city that air conditioning built, I marvelled at the way subway-car doors lined up precisely with station-platform doors, the whole system designed to keep coolness constant everywhere.

In Switzerland, I shook my head in disbelief when I discovered that a cross-country commuter train could make front-page headlines by arriving two hours late.

Out of such experiences, writer Taras Grescoe built Straphanger. He had the smarts to apply himself systematically, leaving his Montreal home to test public transit in New York, Copenhagen, Paris, Los Angeles, Bogota, Moscow, Tokyo and several other cities.

To this extensive legwork, Grescoe added context, theory and a series of interviews with key players. The end result is a marvellous investigation of urban transit whose thrust is neatly summarized in its subtitle: Saving Our Cities and Ourselves from the Automobile.

After rollicking through the prologue, the introduction and Chapter 1, which focuses on New York, I could wait no longer. As a resident of Toronto, which has been mired in a transit war since Rob Ford became mayor late in 2010, I skipped to Chapter 11, ominously entitled The Toronto Tragedy.

Call it a credibility check. Did Grescoe understand what was happening in this Ford-suffering metropolis? Did he appreciate that Torontonians had whirled off into a real-life Back to the Future and were fighting through a nightmare scenario featuring our own Biff Tannen?

Grescoe recognizes that Toronto "is in the grips of a culture war." He says this wouldn't matter much, "were it not for the long-term damage Rob Ford is capable of inflicting on the city."

Yes, the author is talking about the mayor's assault on Transit City, a plan that "would have added seventy-five miles of new surface rail routes." It would have created 200,000 jobs, renewed the city's fleet of trams, and "turned Toronto into the Strasbourg of North America – a city on the cutting edge of urban transit."

In Strasbourg, Grescoe explains, a "tram revolution" has transformed a polluted, automobile-choked city into a commuter's dream that attracts tourists to see "one of the most appealing city centres in France."

With the opposite scenario threatening Canada's largest city, Grescoe asks: "How did a guy like Ford happen to a nice place like Toronto?" He answers that "the rise of Ford nation, and the gridlock and transport paralysis that are sure to ensue, became inevitable when Toronto's future was handed over to its suburbs."

It's a cautionary tale, he adds, "that should be more widely known – if only to prevent it from ever happening again."

But wait. Since the day Grescoe wrote those words, two dozen city councillors have repudiated Ford's declaration of war on affordable and efficient urban transit. Those councillors have put Transit City back on track. Grescoe has been keeping in touch, and notes that "Toronto may yet get the economical light rail … set out in the original plans for Transit City." Either way, his 17-page Toronto chapter in Straphanger remains the best summary yet of what is happening here and why it matters.

That said, and the book's credibility vindicated, I am delighted to travel the world with Grescoe. In 2003, in London, he tells us, Tony Blair's government set up a public-private partnership to refurbish the Underground. This proved "a disaster" that pitted the people maintaining the tracks against those running the trains. After five years, the private builders "walked away, citing skyrocketing costs," and a renationalized Underground is today back at square one.

In Paris, meanwhile, a newly elected mayor declared "open war on 'the hegemony of the automobile.' " He turned a highway along the Seine into a sandy beach and introduced a bike-sharing program, and today the Paris métro and connecting lines constitute "the most ingenious and efficient urban transit network ever built."

But in Europe, Paris does not stand alone. Any North American who has rambled the continent will identify when Grescoe writes, "Travelling around Europe was giving me an inferiority complex." He's talking not about the architectural glories and art galleries, but about the high-speed train network. Why, he wonders, "do the Europeans do urban and intercity transport so well? And why are North America's passenger trains … so uncomfortable, so unreliable, and, to put it bluntly, such an egregious embarrassment?"

The answer, in brief, is the North American love affair with the automobile. Grescoe points to Phoenix as a worst-case example. He suggest that it is well on its way to becoming a ghost town. In years to come, he writes, "people will look at aerial photos of Phoenix and other capitals of sprawl and see all the parking lots, strip malls, and overpasses as the manifestation of a pathological addiction to cheap fossil fuels."

In Los Angeles, perhaps surprisingly, the author sees positive signs. In the newly built Gold Line, he discovers "a textbook example of well-executed light rail … [that]makes even the newest city bus feel like the lurching, cramped, traffic-snagged, second-class ride that it is." He reserves top marks, however, for Vancouver's SkyTrain, "a force multiplier" that dramatically reduces car-dependency: "The Vancouver model," he writes, "which puts high-density residential and retail right up against high-capacity transit, is emerging as the one to beat."

Straphanger is comprehensive, insightful and well-written. Mark my words: Later this year, you will see it short-listed for non-fiction awards.

Ken McGoogan has gone straphanging in Paris, Rome, Hobart, Kuala Lumpur, Dublin, New Delhi, Colombo, London, Melbourne, Dar es Salaam and Glasgow, as well as in Canada and the United States. His 10th and most recent book is How the Scots Invented Canada.

Global gridlock: How some cities tame it while others grind to a halt
May 8, 2018 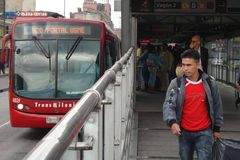 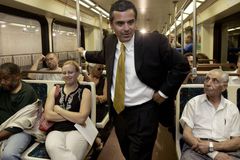