The sun blazed down on a plain of unblemished snow, paining Gregory's eyes. Despite the sun's intensity, the air was biting cold. Everything appeared burned white. Squinting, Gregory was unable to keep his right eye open; it jammed shut against the brilliance. Pausing to gaze back, he traced the trail of footprints sunk deep in the snow. They began at the distant unplowed road and continued on to where he presently stood. Clumps of snow had dropped inside Gregory's boots and slipped lower, remaining frozen. His fingertips and earlobes stung while he wondered how far he would have to walk before losing sight of the road entirely.

Orange shadows tinged the snow-covered field as sunlight brushed the horizon, its hue blending warmly. Gregory sat in the snow with the length of his black duffel coat beneath him. He could not make out a single detail. He had trod so far toward the interior that white now enveloped every vista, save for the depth above. The sky was a more concentrated blue since when he first set off on his journey hours ago.

Gregory plucked out his gold pocket-watch and held it in his pinkened palm. The glass face was raised and unscratched, the black roman numerals clear and distinct. The big hand pointed at IV, the small hand was skewed between V and VI. The seconds hand revolved faultlessly. He thought of pulling up the hood of his duffel coat but decided against muffling himself.

Staring down at the snow, he realized he was now standing. His left boot had toppled over. It lay there empty and unattached. Already, one of his legs had gone missing.

What have I come here for? he asked himself. Because his leg had vanished, he assumed there must be action nearby, cleaving action that drew this bodily conclusion. He turned to peer over his shoulder. A white cat with a single grey spot on its back was mounted on a white cat with a single grey patch on its side. The male cat pushed rhythmically, almost imperceptibly. The female cat remained still, alertly watching forward, a one-word statue erected in the name of "breed," not "breathe."

Gregory crouched to pat the snow where his foot once stood. Pressing down, his hand gouged finger holes in the snow, and his skin tingled fiercely. His balance faltered and he sat without effort or startlement, as though he had been seated all along.

There was no pain where his leg had been attached. He leaned to reach with his left hand yet was jarred by its inaction. He wondered what might be preventing it from following his directive. Turning his chin toward his left shoulder, he stared at the empty sleeve of his coat hanging slackly.

A shadow swooped across the snow, momentarily masking the sun.

Gazing skyward, Gregory's eyes followed a white gull with its belly feathers stained red in strokes and flecks. The gull carried a burdensome object in its beak while its wings laboured to ascend. Devoted to gravity, the object slipped free, and the gull made a fleeting swoop to snatch it. The object plummeted fast and hit the snow with an accepting sound that stamped the outline of a fluttering hand or bird in the surface.

Gregory watched the hole, anticipating testament, only to face moments of nothing before a single pink finger rose, pointing skyward, followed by the remainder of the hand, the folded fingers and thumb, the bare hairless wrist.

In time, Gregory gazed at the deepening sky. The moon was visible in the distance despite the sun's reluctance to vanish.

Again, he removed his pocket watch to study its face. The roman numerals had rearranged themselves. The big hand had shrunk and the small hand elongated. Gregory was hard pressed to come up with the time, although he remained confident that the seconds hand was faithfully counting down.

He thought he might be sleeping because his head felt uncommonly heavy. He heard his name repeated like a sizzling brand into snow: "Gregory, Gregory, Gregory, Gregory …" Searching around, perhaps waking with a start, he witnessed two sets of eyes flashing green at him in the darkness. They dipped and rose and dipped again as though bounding ahead. The moonlight brightened to reveal two people on all fours eating a fleshy mass that had been opened on the snow. Gregory searched within himself yet found no appetite.

Are you my parents? he wondered. And from when? But the moon, as if pardoning itself from needless consideration, dimmed like a despot, and Gregory's right arm went away with it.

In the morning (if the burst of vivid light was to be explained that way), Gregory discovered that his other leg had been pilfered. He could not pat the space with his hands as he now had neither. While struggling to stand, he tipped backward with a solid thump and could do nothing other than worm onto his back and peer into the sky. The snow was warm beneath him. Movement was now objectionable. His leaden mind preferred inactivity.

Perhaps the seasons have changed, he reasoned. He lolled his head to the left and saw the pink finger still pointing skyward; the hand and wrist were bluish-green. He believed that his face might need a mirror to detail what remained collected there. Was the sky a mirror? He imagined himself in the grain of blue. Yet it was nothing like how he remembered himself. Grains of blue to grains of black. Were those stars or airplanes? His face was an unfamiliar outline that mystified his missing limbs. Unattached, they behaved cool and impartial toward any idea that touched him.

A crow flew through his face to drop a wooden branch. It lodged in the snow, a thick, flat-headed arrow insinuating itself into a limb.

Gregory was familiar with the boot stuck at the top of the bare leg. The finger, in an unexpected interlude, ceased pointing skyward to bend its tip at the boot.

I am watching all of this, Gregory told himself. I certainly am, for what could be more incredible than this blizzard of stillness?

The mating cats brought Gregory their kittens, one at a time. The kittens, held in the patient mother's jaws, displayed no interest in him. They were too soft to be concerned, too full of their own tiny, beating hearts.

There were hoof tracks in the snow. No doubt a moose, Gregory reckoned, for the moose had yet to show itself. Along the trail there were more tracks. They led around Gregory's head and then directly toward his right ear, where the moose had entered. Indifferently regarding Gregory, the moose plunked down a pile of droppings that gave the impression of Gregory's second leg. The moose stood stony, archaic, then strode out of Gregory's head, favouring the yawning impassiveness of nature.

Torso rhymes with what? Gregory wondered. His eyes searched the white field like rodents rolling in a circus. He found his finger 15 feet away, aimed at the boot on the end of the stick of a leg signalling. He studied the pile of moose droppings that amounted to his second leg.

In a flash of furry white, a lynx's face appeared in his. Perhaps it was a constellation. But when the lynx bared its teeth, its fangs the fingers of a man's left hand, Gregory burst out with laughter. The animalistic logic was flawless. A language that made the lynx itself. Torso rhymes with more, so … other creatures appeared until the sky was filled with their reflections in that white constant field that came down on itself.

Gregory's head assumed it knew what it was doing. When the snow melted, it was left there in the field, liberated in the thaw, looking preposterous, for it once presumed itself concealed by winter.

As the solitude of frost had run its course, Gregory gathered his limbs and torso from the brown grass and headed back to the road that was muddy with warmth. His legs and arms were lighter than expected. They worked masterfully, striding and swaying in excellent measures. His thoughts, too, seemed newly capable of building bridges, one to the other, leaving no gap to plunge through.

He continued toward the road, his eyes brightening at the sight of his vehicle, the driver's door open, the engine running.

Clumps of snow fell from the trees, alleviating branches of their burdens. Water trickled over stones in the near distance.

New growth, Gregory thought. Invigorated, he drew a deep breath, climbed into his car and drove away. A glance in his rearview mirror further enlivened him, for winter was not in pursuit.

Kenneth J. Harvey is an award-winning filmmaker, photographer and writer. He produces the consumer revenge broadcast, The Harvey Retaliation. 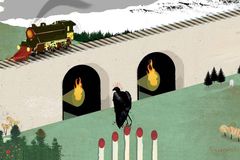 Summer fiction: A tale about a shamingly strict sort of suicide watch
July 7, 2012 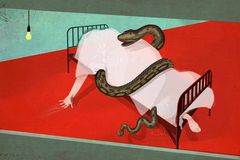