The other day, we opened Joe Sacco's new book in the newsroom. Normally, opening a book is something I can do all by myself, but this one was different. We needed not one, not two, but three people to open it.

Sacco writes and draws hybrid works of journalism, and his books, such as Palestine and The Fixer: A Story from Sarajevo, have changed the way both comics and conflict reporting work, redefining the possibilities of both written and illustrated reporting. His new one, The Great War, is a panoramic drawing of the first day of the Battle of the Somme, depicting its horrors in intricate and tragic detail.

The reason I needed help opening it is because it is an accordion book – its connected pages spill out from within cloth-covered boards – and because it is 7.3-metres long.

It stretched over our desks and across a little table. It slouched perilously near an open container of glossy doughnuts. A colleague braced the middle, another took the far end, and still the thing sagged in places. It twisted and turned in the still air, threatened to tear in one spot and quickly attracted a small crowd of curious onlookers. What is that, they asked?

Well, it's a book. And, if you believe much of the lazily conventional wisdom about where physical reading is headed, it might be something like a book of the future. It takes a very old printing trick (the Mayas and Aztecs made them out of bark), and it has been used over the centuries to hold all varieties of stories and images. And it makes it luxurious: handsome slipcase, accompanying essay and annotations, precisely the sort of high-production-value art object that's constantly cited as a way forward for print.

If everyone's an e-reader, print fetishists will increasingly value just this sort of fineness, the argument goes.

But I think the argument is wrong. Sacco's undoubtedly beautiful and expressive book reminds me, at least, that I'd rather have a junky old paperback, the very kind we're too often told is dying.

The accordion isn't just for comics, although there are fine examples in that mode, such as Anders Nilsen's recent Rage of Poseidon. This year has also seen children's books and even poetry spilling forth in the form. Novelist and poet Anne Michaels's latest offering, Correspondences, is billed as a hybrid of words and images that brings together a long poem and illustrations from Bernice Eisenstein in "a unique, accordion-style format." If you can move past that assault on the word "unique," you'll find a pleasant enough meditation on writers and thinkers with whom Michaels finds an affinity: W.G. Sebald, Paul Celan, Nelly Sachs, Albert Einstein, etc.

In Correspondences, the accordion performs a handy trick, quietly arguing that there is some undulating continuum linking all these people, and linking us as readers to them, offering us the chance to imagine our own portraits rendered in the dull, lifeless style of Eisenstein's drawings. Employing quotations from her various subjects, Michaels stitches together a heartening if unsubtle reminder that life is one big pot of stew: "We don't know, / we are the same everywhere. / I see you, / I hear you, / feel you."

But even after having been seen, heard and felt, I still find myself longing for more, or maybe something else. Michaels' accordion, like Sacco's, seeks to knit together experience, to bring disparate subjects and characters together. While the shape of these books seems ideal for colliding lives, it actually isn't: Though the accordion feels boundless, it is still but one accordion.

The form is more effective when used as a drill rather than a net, screw-driving its insight into one subject instead of dozens. Anne Carson proved this with her profound 2009 book Nox, a memorial to her brother, which is the most successful contemporary use of this bizarre format, creating a singular stream of thought and inquiry. Reading it feels like existing inside another consciousness, rather than trying to hop among too many.

Sacco and Michaels offer ambitious ways of telling stories, but they just serve to convince me that the structure of the traditional book, its regulated lines, its framed blocks of type, is exactly what we crave – perhaps, in fact, exactly what we need as a means of accessing more complicated concepts and emotions. Sacco says that his panorama was inspired by the Bayeux Tapestry, that 70-metre-long pictorial account of the Norman Conquest. But tapestries have fallen out of fashion in the centuries during which we've had an even more effective way of telling a tale: a simple page, printed in a regular fashion, containing some kind of narrative.

Last month, in a used bookstore in Edmonton, I was drawn to a big stack of old Ross Macdonald crime novels. I'd never read Macdonald, so I did what any curious reader would do: I asked Twitter which one I should get. Twitter obliged, and I left with a brittle, decades-old copy of The Blue Hammer.

Within it, you'll find a tidy, digestible version of the various darknesses that sprawl inside all of us. Yes, tidy in the sense that there's a bad guy and a good guy, and the good guy's quite likely to win. But tidy in another, more important sense: It's contained, not just within the boundaries of genre convention or plot contrivances, but within the very prison of its small, yellowed pages.

Rather than looking into it and seeing an abyss, or a mirror thereof – rather than seeing an endless accordion unfurling that reminds me of the constant, anxious whirring of my own mind – I find pages and lines, structures through which I can access ideas, passions, longings, hopes. If a book like Middlemarch, often celebrated for containing so much of the ambiguity and drama of the human experience, succeeds, it is because we as readers have an agreed-upon means through which to explore that experience and those ambiguities. There's something to be said for comfort, for knowing how to go about a given task.

A friend who works in publishing recently told me she prefers her iPad to other devices because it presents a book as a page she can turn rather than an unspooling reel of text. Even in the ether of an e-book, we're drawn to order. A book functions as scaffolding for the parts of ourselves we see within its text, a way to make sense of all the sense we make while reading. Complicated things, for once, are made simpler. 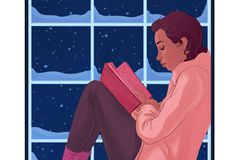 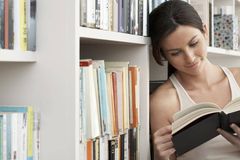 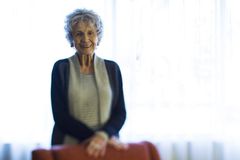 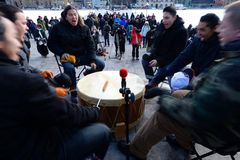