Torontonians of the downtown persuasion are probably familiar with Misha Glouberman. You might recognize the name from his eponymous School of Learning, where he teaches charades and improvisation. Maybe you know him in his capacity as host of the Trampoline Hall lecture series. Or perhaps you enjoy Sheila Heti's fine and funny writing and recall Misha from her last book, the novel(ish) How Should a Person Be?

The Chairs Are Where the People Go is a sequel of sorts, insofar as Heti is again trying to understand life through the lens of a friend. Heti explains that she struggled with a Misha novel, only to scrap it. "If I wanted to capture Misha, in all his specificity, why was I creating a fictional Misha? If I wanted to engage with Misha, why not leave my room and walk down the street?"

He spoke, she typed and they gathered his enthusiasms and experiences into 72 short pieces on a miscellany of topics, such as miscommunication, monogamy, manners and music. Glouberman also considers his stint at Harvard University, his forays into the world of municipal noise and licensing bylaws and the finer points of charades and the teaching thereof.

In the same way that Heti wishes to write books without confecting fake characters, Glouberman prefers improv that engages participants, rather than entertaining an audience. "I'm much more interested in improvisation as a practice, or as something to do, than as something for people to watch." He has a similar take on music and speaks about his sound improv events, Terrible Noises for Beautiful People, that allow folks to participate in the joy of jamming.

That may strike some of you as artsy-fartsy, but Glouberman also has some criticisms of his presumably bike-loving pinko social set. He's anti-anti-gentrification, as he believes a city is an inherently commercial and plural space. Some of his friends might dream of a Toronto awash in fixed-gear bikes, graffiti and performance art, but his grandma probably wouldn't like that much, as he argues in an entry titled Making the City More Fun for You and Your Privileged Friends Isn't a Super-Noble Political Goal.

A pal who works at a bookstore really dug this book, but confessed that he had no sweet clue where to shelve it. Biography? Not really. Humour? It's not exactly Chelsea Handler's Hilarious Drinking Problem, Vol. 7. Philosophy? Sort of, but it could just as easily be slotted under Games or Self-Help.

Glouberman has eccentric interests, but this is also an odd project. Heti has collected her friend's opinions because she thinks they are good advice. One Seattle reviewer said that this book "does for the self-help book what Moby-Dick did for the novel," which is a pretty sweet blurb.

But self-help advice is necessarily rather generic, theoretically applicable to anyone. And Heti clearly admires Misha for being an individual possessed of great specificity, a buddy so exceptional that "the world should have a book of everything he knows." It's hard to bring these two aims together without treating the subject as a sort of exemplar or guru, like the Buddha of Queen and Beaconsfield.

This is simply to say that this reads more like an "as told to" than a "with" book. That is not a criticism, as this venerable form has worked for reluctant authors from Socrates to Tommy Lee. However, I did find it strange reading Glouberman enthuse about improvisation, spontaneity, dialogue and group dynamics in the form of transcribed addresses to a friend who disappears at the end of the intro. Perhaps a more conversational format might have allowed Glouberman to practise – a word he really likes – spontaneity rather than speaking about it.

Even Glouberman concedes that this is a weird book. "It's amazing to me that someone can have the courage to write a book or to stand up onstage and talk for a long time. It just seems impossible to imagine that what you have to say might be so important that other people would want to sit down and listen to it or take time out of their life to read it. So this book is a weird project for me."

Book review: How Should A Person Be? by Sheila Heti
October 8, 2010 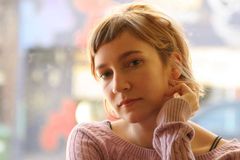