Over the past month, a number of disturbing revelations have come to light within the Canadian literary community. I use the term "come to light" deliberately, because many of us were already fully aware of how dangerous it can be to be a woman in this particular culture.

At great risk to herself, Toronto poet Emma Healey penned a thoughtful, candid and scathing condemnation of the sexual and psychological abuse that exists in our own backyard. On the website TheHairpin.com, she detailed a relationship she had at 19 with an unnamed prominent Canadian writer and English professor. He was 34. The alleged ensuing dynamic was inappropriate at best, and entailed sexual assault at worst.

"A story like this is a password," Healey wrote. "Once you say it out loud, doors start to open." She was right. What erupted was not only a buoying international surge of online support, but an explosion of revealing conversations among other brave women. She isn't his only victim, and he isn't the only perpetrator in our midst, they said.

Emma Healey's story and those of women like her are sadly both horrifying and unsurprising. The publication of her piece came in the wake of similar accusations made against a handful of prominent American male writers who have allegedly used their power and influence to coerce and abuse young women. Each story shared gave another silenced and isolated woman the much-needed permission to speak out, and there was a period where it felt each new day brought news of the latest abusive literary man to be avoided, if not prosecuted. Facebook conversations and blog posts went up, and comment sections were littered with countless tales of cruel dynamics.

"[I wanted to] give people a starting point for thinking or talking about these issues. So in one sense it feels 'good' to have done that," Healey told me by e-mail, when I asked her about the reaction.

"But at the same time, it's awful and I wish I lived in a world where this essay meant nothing to anyone, where my experiences were isolated and rare," Healey said.

These conversations are not new. It's just that we're finally having them out in the open. While some of these predators have been operating for years without public acknowledgment or punishment, there has long been a shared back channel amongst women in Canadian literature – coded warnings relayed privately, chatter about who can be trusted and who is safe to be around. I have spoken with women from a variety of age groups in a variety of positions in the industry, each tentatively naming names, testing the waters of dialogue to see how safe it is before we dive in, each terrified of what will happen if it comes out that they have said something.

Those women already knew about the bullying, the threats, the intimidation, the coercion and the sexual assaults. They have built and shared a growing list of offenders. They are nodding to themselves and to each other, even if the community at large is shocked and dismayed about this truth being exposed. We tried and failed to help each other through hushed warnings, and now we are grateful that maybe something will be done.

Because, as Healey writes, "without exception, every single one of these men is still working – writing, publishing, editing, teaching – today."

As these normally closeted conversations finally become public, it's difficult not to ask the question: Is there something so broken in our literary culture that it encourages, sanctions and protects this kind of behaviour? We know there are countless men just like the unnamed English professor, men who are propped up, apologized for and empowered every day by a culture too afraid to upset the status quo, too afraid to anger someone lest it upset their own professional or social circles. I've watched bickering about the "right way" to reveal these kinds of stories, seen the anxiety people feel when they're discussed on websites and social media. But when a "respected peer" harms you, there is a relief when people finally say his name in the context of abuse – the seclusion you've endured is unbearable, and to see others acknowledge it is small yet welcome solace.

I can't help but think that this archaic idea that victims should stay silent if they want "real justice" is lunacy. Victims of harassment, rape and violence know legal justice in these circumstances is a near impossibility, that there are no good choices, and they need a forum for the suffocating facts, regardless. Since it's obvious we have failed to provide that safe space for them, discussions on social media and online essays have become a last resort.

Of course, if we had collectively turned our attentions to supporting and believing women in the first place, there wouldn't have been a need for this churn of online "outrage." For the women who gather the unbelievable strength to finally speak, this is about healing, about making the community safer and better for all of us, and because of that we should constantly be encouraging them to share their stories on whatever platform they choose.

If you are a member of this community and didn't know that gendered abuse was rampant before Emma Healey broke the dam, perhaps you should ask yourself why the women you know were afraid to tell you. There is an important message here applicable not just to this tiny corner of the arts, but to similar tight-knit communities turned toxic – quite simply, when a woman tells you a man you know is an abuser, trust her. It doesn't matter if he's "always been nice" to you – don't give him the benefit of your doubt. Don't protect his "literary genius." Don't publish or review his work, don't sign him up for your reading series or festival, don't buy his books, and don't continue to support his ability to victimize the voiceless. Don't value politeness, or avoiding conflict, or your career over the safety of the traumatized. Don't knowingly make spaces intolerable for the abused. And don't ever tell a woman where or how she's allowed to tell her story.

Jennifer Lawrence: Thank you for your real talk about the nude-photo hack
October 7, 2014 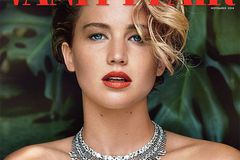 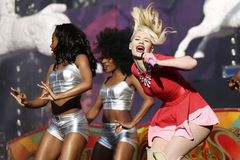