Madeleine Thien is a soft-spoken woman who needs lots of time alone and says she’s no good at parties. But she’s adept at striking up conversations with strangers, like the man next to her on a bus in Laos a few years ago, who was reading one of her favourite books: 100 Years of Solitude. He was also a vet at a home for retired forestry elephants, and wanted someone to write brief life stories of his charges. That was how Thien – whose novel Do Not Say We Have Nothing is on the short list for the Man Booker Prize, the Giller Prize and a Governor-General’s Award – became an elephant biographer.

“I did it for a month,” she said during a conversation in Montreal. “It was like summer camp.” In the mornings, she worked on the text that become Dogs at the Perimeter, her prize-winning second novel, and during the afternoons she talked with mahouts (keepers) and built up character sketches of the elephants. “Some were extremely grumpy, or they didn’t like to have a bath, or they got shy about certain things because they’d had different experiences. It was fascinating.”

In Shanghai, a favourite city, Thien has met strangers while sitting by the road, watching the world pass by, which she can happily do “for hours.” People approach her in part because in Asia, she said, a lone traveller is seen as an unfortunate, in need of sociable assistance.

Her chance encounters supply her with observations and turns of speech that sometimes return, if only as a subtle influence, during her hours of solitary writing. Walking the snowy streets of Montreal in winter is another way of feeding her work, she said, because of the emotions harsh weather stirs up in people, and because the movement itself is liberating. 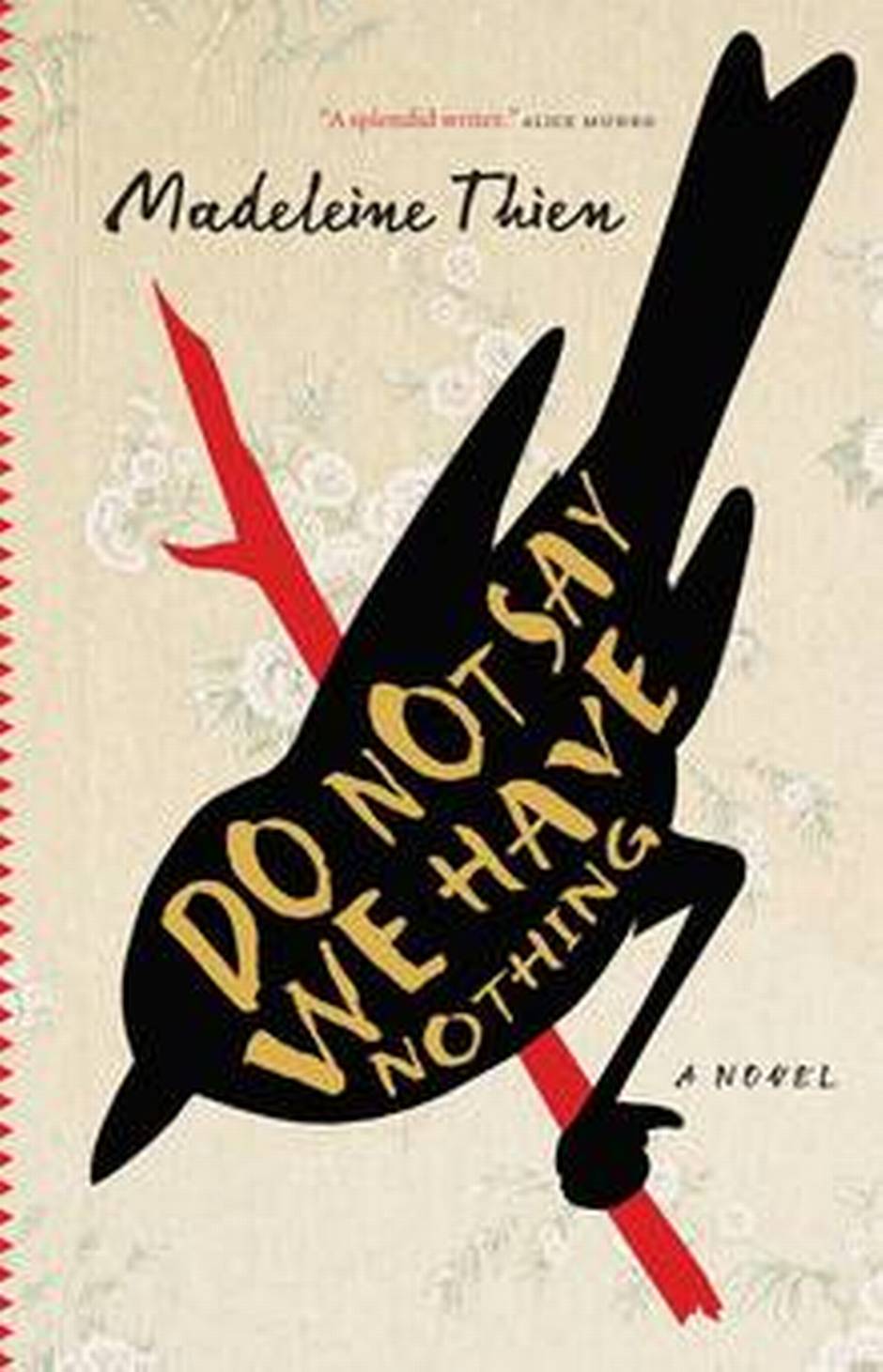 Do Not Say We Have Nothing tells an epic multifamily story about what happens when creative people have no freedom to exercise their gifts.

“It’s great for thinking,” she said. “You let go of the reins, because you’re seeing different things and people. I’m less likely to control the way my thoughts are going, which can happen when you’re writing.”

Sometimes the reins are yanked away by the material, as happened during an early stage of Do Not Say We Have Nothing. “I thought I was writing a 200-page novel about the Tiananmen Square demonstrations, but by the time I was 50 or 100 pages in, I knew it wasn’t the book I thought it was going to be,” she said. “But where I was going was, for me, the most exciting writing I had ever done.”

The book tells an epic multifamily story about what happens when creative people have no freedom to exercise their gifts. Thien’s central characters are Chinese musicians whose instruments and manuscripts are destroyed during the Cultural Revolution, and who are forced to “re-educate” themselves through exile and manual labour. Their decades-long drama also includes the dilemma of needing to get beyond past trauma, while not allowing the history of what happened to be officially erased.

“The individuals in the book want to let go of the past, but they can’t do that if there’s no memory whatsoever,” Thien said. In her narrative, the repressed Tiananmen student demonstrations of 1989 become a fragile opening through which forbidden memories can be aired, briefly and tragically.

Thien’s ethnic Chinese parents emigrated to east Vancouver during another time of turmoil in Asia, following a Communist insurgency in their native Malaysia. They had never lived in China, had no experience of the Maoist regime, and had been educated by Jesuits. Her father opened a Chinese-Canadian restaurant, and her mother worked at the big Woodwards store downtown. Like many immigrants, they focused their dreams and ambitions on their children.

Thien was born three months after their arrival in Canada, and like her siblings, went to a Chinese Catholic school. English was always the language at home, she said, in part because her parents didn’t speak the same Chinese dialect, but also because Thien was very resistant to learning or speaking the language.

“I associated it with a kind of precariousness,” she said. “It would set you apart in a way that as a child you don’t want to be set apart, and maybe you understand that it’s a way of thinking too, and you don’t want, or are not able to know how, to use that.” She was precociously good with English, and became the family translator from the age of seven, always trying to protect her parents from the humiliation of making a mistake in a Vancouver that was less diverse than it is now.

“It caused me a lot of sorrow, especially for my mother,” she said. “I never wanted her to feel ashamed. And when you’re a child growing up in a place that’s in transition, culturally and racially, you do see your parents being ashamed, and it stays with you.”

Thien was quite willing to throw herself into the Chinese cultural activities her mother lined up for her, including traditional dancing and calligraphy, it being somehow okay to write the language she avoided speaking. She played a little piano and studied ballet seriously for 10 years, before beginning a degree in dance at Simon Fraser University.

She thought she would become a choreographer, but after a year of study, she decided that making things with words would be a better fit. She applied to the creative writing program at the University of British Columbia and was rejected, though eventually found her way in through a non-fiction writing course. Simple Recipes, a collection of short stories published in 2001, won a BC Book Prize and was a finalist for the Commonwealth Writers’ Prize.

She has always been conscious of different types and registers of speech, from her parents’ incompatible dialects to the forms of private and public language that we all negotiate. The distinction comes dramatically to the fore in Do Not Say We Have Nothing, in which people often parrot official slogans to survive, while sheltering their own thoughts in silence or secret discussions.

“Code-switching was such a big part of the use of language,” she said. “I think we’re all code-switching a lot. We don’t notice when the public language has taken over our private language.” It’s easier to adopt and recycle a received idea than to think about who and what benefits by it. Thien recalls a remark made by a Cambodian filmmaker she met while travelling there: “The slogans do our thinking for us.”

Thien had only once been to Asia, for a family trip to Malaysia, when she and her mother began planning a visit to China in 2003, when Thien was 28. Three months before they were to leave, her mother died suddenly in her sleep, at age 58.

Thien made the journey anyway, propelled by grief, and by a newly urgent feeling that life passes quickly and the world doesn’t wait for anyone. During the next decade, she travelled widely through Asia, taught for a while in Singapore, got married and divorced, and lived in Amsterdam and Quebec City.

“I don’t think I knew where I was going to end up,” she said. “I’m deeply attached to Vancouver, but I didn’t feel I could go back there, emotionally.” She had friends in Montreal, and moved there with the idea of starting fresh in a new place. She’s still here after six years, living in a relationship with the Lebanese-Canadian writer and photographer Rawi Hage and still missing the Pacific salt air.

Music came into her novel unexpectedly. Thien was writing in Berlin, where Hage had a residency and an apartment that wasn’t a convenient place for two writers to work simultaneously. She began writing in a cafe, shutting out the sounds of coffee-making and conversation with Glenn Gould’s 1955 recording of the Goldberg Variations, on continuous replay. Over a five-hour writing period, she figures she must have heard the piece 10 times each day.

Thien seldom took in what she was hearing while working intensively, but during that first draft, music began to insinuate itself in the narrative. Gould was “everything these characters would never have been allowed to be,” she said, and Bach embodied the free movement of ideas from West to East that had also brought Marxist thought to China. Bach and Gould are both presences in the novel, as exemplars of life that can be imagined but only furtively experienced. The recurrent structure of many Western classical forms also seemed relatable to Chinese conceptions of circular time, and to the nature of memory.

“These stories don’t feel ‘historical’ to me,” she said. “They feel very present.” They also have a strong connection with Dogs at the Perimeter, a novel of similar themes set in Cambodia during the Pol Pot era. “A lot of the grieving and the incomprehension and the failure of language happened in that book. In some ways it’s the one I’m more proud of, the hard book that left me somewhere at the end. Do Not Say We Have Nothing included all the hard thinking of the previous book.”

Where the next round of hard thinking will lead is beyond her range of vision at the moment. She has put aside her current manuscript for a few weeks of promotion and prize ceremonies. No doubt some of the times between those occasions will find her wandering the streets somewhere, looking into faces and starting conversations with strangers. Every novelist should be curious about people, and whether sitting at her desk or walking down Boulevard Saint-Laurent, Thien is a novelist through and through.