Step up, lucky customers. Author Margaret Atwood has something "very special" for you: an autographed limited edition of her new book, In Other Worlds: SF and the Human Imagination, printed on paper made not from wood, but straw, "without any harmful impact on forests and their fragile ecosystems," according to the author.

To farmers, it's waste. But for buyers willing to pay $100 for one of the 300 straw-based Atwoods going on sale Tuesday, the investment could well prove worthwhile. If nothing else, they will get to enjoy their part in an innovative plan to save the planet.

As the brainchild of Vancouver-based environmental group Canopy, the limited edition is designed to showcase the viability of wheat and flax straw as alternative sources of fibre for fine paper.

"I just find it shocking that in 2011 we still cut down 400- to 800-year-old trees to make bank statements and junk mail," Canopy executive director Nicole Rycroft said in an interview. "We want to demonstrate that in fact you can produce paper without using forest fibre at all.

"And that's what we've done with this special edition of Margaret Atwood's book," she added. "It's made entirely of wheat straw, flax straw and recycled content."

Dubbed Second Harvest by its promoters at Canopy, the new material is "the kind of practical innovation that could make paper from endangered forests ancient history," Ms. Atwood stated in a Canopy press release.

Currently, however, Second Harvest paper is as rare as the books it was made into, having been produced in one small batch by Cascades Fine Papers in Montreal using Alberta flax straw and wheat straw imported from China.

"Although there is an abundance of wheat straw in Canada every year after the grain harvest, there are no pulping facilities that can turn that straw into pulp at this point," Rycroft said. Judging by the interest Second Harvest has aroused from publishers and printers, she added, that could change soon.

"We have documented 800,000 tonnes of paper demand on an annual basis for papers based on straw," she said. "That would be enough to keep four mills running full time."

Paper made from North American straw could forestall the logging of more than half a billion trees every year, according to Canopy.

"This book is also showing that it makes sense economically," Rycroft said. "There is very strong market support for this new resource industry."

Straw paper has changed from a promising idea into "an important business strategy for Cascades," said company spokeswoman Julie Loyer.

A non-profit group dedicated to forest preservation, Canopy first ventured into the publishing business by persuading Vancouver-based Raincoast Books to publish the Canadian edition of Harry Potter and the Order of the Phoenix on 100-per-cent recycled paper. The Canadian edition included a special note from author J.K. Rowling acknowledging the gesture – as do the Atwood straw books – and has since been emulated by Potter publishers worldwide.

Straw paper represents the next stage of "the revolution for our forests," Rycroft said, adding. "We think the release of Margaret's book will help engage decision makers within government as well as the pulp-and-paper industry and investment circles into taking the next step in making this industry a reality."

Canopy's 300 straw-based copies of In Other Worlds are available at canopyplanet.org. Proceeds will be used to finance the group's Second Harvest program.

new
Now he'll recognize her: Doug Ford meets Margaret Atwood
September 21, 2011
Atwood or Doug Ford: Who would you rather dine with?
August 29, 2011 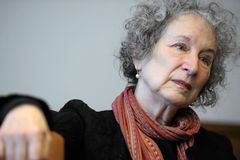