REVIEWED BY RAY ROBERTSON
Special to The Globe and Mail
Published March 23, 2012 Updated May 3, 2018

Aspiring authors and professionally marooned seasoned writers take note: It might not be you, it could be them.

Them, of course, is the publishing industry, that increasingly multinational, blockbuster-driven business with a branch plant coming to your part of the product-purchasing pie chart soon. Ten publishers passed on Jack Kerouac's zeitgeist-shaping novel On the Road; after its New York Times bestselling success and its author's ascension to Beatnik No. 1 and consequent fascinating media copy, Kerouac's agent had no trouble selling off the backlog of manuscripts his client had piled up during the Thanks-but-No-Thanks interval; after Beatniks gave way to hula hoops as a captivating cultural phenomena, it was essentially back to respectful rejection letters. In case we needed reminding: there's art, there's commerce, and there's usually not a whole lot the two have in common.

Since his death in 1969 at 47, from alcoholism, things have swung back in black the other way – hard – and show no signs of letting up. On the contrary, Kerouac is now almost as culturally mythic as such other icons of his era as Elvis, Marilyn and JFK. He's simply Kerouac these days, the whisky-guzzling wild man who wrote the long sentences that the squares just didn't have deep enough souls to appreciate. And capitalism does love an identifiable brand.

In the 40-plus years since Kerouac's death, after what seemed like every unpublished Kerouac manuscript had been dusted off and passed off to the always dupable public as "a major discovery," we now we have The Sea Is My Brother, the novella Kerouac wrote when he was 20 and which he himself later dismissed as a "crock."

Authors aren't always to be trusted when it comes to evaluating their own work; witness Samuel Johnson, who imagined it would be his wooden poetry and plays, and not his inspired hack work, that would live on after him. But in the case of The Sea Is My Brother, the author was right. Which doesn't mean it might not have its interest to scholars; only that, as a purely reading experience, it's so embarrassingly badly written in so many places that at times its difficult to keep one's eyes on the page for embarrassment, especially if (as I do) one reveres the man and the best of his inimitable writing.

The Sea Is My Brother centres on two characters, seaman Wesley Martin and a Columbia University professor named Bill Everhart, who share a trip as merchant marines on a ship full of war cargo headed for Greenland (not surprisingly for so juvenile a work, the novella is heavily autobiographical; Kerouac briefly served on a wartime ship called the SS Dorchester). For those who know Kerouac's oeuvre, many of his obsessions (half of what makes up any good writer) are here: There's the tumult and mystery of male friendship; there are jazz, hitchhiking and drunkenness, all representative of Kerouac's fixation on freedom (both its allure and its frustrating ephemerality); there's plenty of philosophical conjecturing on who we are and why we're here and where we go when we're not. Hopefully, we become better writers; we rarely become more interesting (or interested) people.

The other half of what makes writers who they are is not what they write about, but how they say it – their style. The mature Kerouac, beginning with On the Road, wrote like no one else, the highest compliment any author can receive. The prose of The Sea Is My Brother isn't merely unrecognizable to those familiar with Kerouac's established authorial voice, it's almost unceasingly puerile. On one single sample page, for example, a character "cried" (instead of "said") before "waving his arms dramatically"; another "suggests" (instead of "said") "wearily"; still another "announced" (instead of "said").

On another single page chosen entirely at random, various characters "howled," "cried" and "muttered bitterly," only to conclude with a character "dash[ing]off at a furious pace." An ocean of unnecessary adverbs and adjectives aside (as well as several point-of-view changes), there are plenty of sappily sophomoric lines such as: "Before he knew what had happened, her lips were pressed against his mouth, her arm had clasped around his neck. Dimly, he recognized the taste of her mouth, a fragrant tang that swooned his senses with a recollection of things he had not known for eras of his life, and which now returned to him in a tremulous wave of loss."

Whoever was responsible for purchasing and publishing The Sea Is My Brother should be spared moral censure if, as is ordinarily the case in the publishing industry, they saw the book as nothing more than another piece of product to toss into the marketplace. You can't argue with a satisfied stockholder. If, however, those involved in this act of authorial desecration in the name of pseudo-scholarship ever cared about literature at all, they should be ashamed of themselves. And because they likely wouldn't be, they should be ashamed again.

Contributing reviewer Ray Robertson's most recent book, Why Not? Fifteen Reasons to Live, was a finalist for the Hilary Weston Writers' Trust Prize. 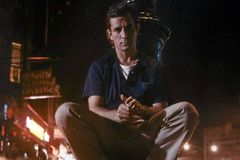