A state-of-the-art White Star Line passenger ship boasting the latest in luxury accommodations and its steerage filled with emigrants bound for New York City sinks to the bottom of the Atlantic Ocean, taking hundreds with her. The Titanic, right?

Well, yes. But also the SS Atlantic, a steamship that sunk off the coast of Nova Scotia on April 1, 1873 and took more than 500 lives. It was the worst maritime disaster of the 19th century, just as the Titanic was the worst of the 20th, but the story of the SS Atlantic has rarely been told - thanks in part to the White Star Line's desire to have the disaster sink from memory.

In SS Atlantic: The White Star Line's First Disaster at Sea, two Nova Scotia authors have salvaged the memory of that horrible night. Greg Cochkanoff, who died suddenly last year, spent 25 years researching the ship's history and explored the wreckage hundreds of times in his scuba gear; Bob Chaulk, a fellow diver with a passion for the history of his province, is a well known local historian and writer.

Together they have pieced together the history of the SS Atlantic, from its construction in a Belfast shipyard to the moment it struck ground off Meagher's Island and sank quickly, and then beyond to the aftermath: the inquiry into the cause of the disaster; the mass burial of the dead; the building of a small memorial to the victims; the pillaging and salvaging of the wreck site; the lessons learned.

The SS Atlantic was, for its time, a state of the art ocean liner. A metal-hulled, steam-powered vessel fitted with a propeller instead of paddle wheels, its lack of a bowsprit, its metal railing and its many other design innovations made it one of the most advanced ships on the sea; it was, in effect, the prototype of the modern ocean liner.

Long and narrow, it was among the first passenger ships to include hotel-class accommodations, thanks mostly to the space created on the deck by the absence of a sail rigging and paddle wheels. For the first time, passengers in steerage - the emigrants who were the bread and butter of transatlantic passenger lines - could get fresh air on the main deck, instead of spending the entire crossing confined to the dank lower decks of the wooden sailing ships of the past.

As well, new government regulations saw to it that the emigrants were well fed and cared for properly during their trip, a move that winnowed out less scrupulous companies. It was a period of rapid growth for the White Star Line and its fleet of steamships (all of which ended in -ic , a company tradition started at the time): Oceanic, Germanic, Baltic, Adriatic and Atlantic. The Atlantic wasn't the fastest of its sister ships, but between 1871 and 1873 it made the crossing the most times (18) and ferried the most passengers (16,200) to the New World.

Photo gallery See the images from the book

And then it crashed on Canadian rocks, a disaster blamed in the ensuing inquiry on the captain's failure to take proper soundings and to have proper lookouts in place.

The Atlantic left Liverpool on March 20, 1873 with more than 1,000 passengers and crew aboard, and had good weather until the 24th, when a storm struck. The conditions deteriorated for four more days, and a week later the storm was still raging. Slowed by the storm, the ship began to run out coal, the fuel that powered its two steam engines.

It was then, on March 31, that the captain decided to divert to Halifax to refuel. All seemed well at first, but the crew and captain didn't realize they were off course and not miles out to sea as they thought. They had drifted toward land, a fact that could easily been determined had they sounded for depth. But they didn't, and at 3:10 a.m. on April 1, the ship crashed into a granite shelf and ground to a halt. Within 10 minutes it was flooded and rolled over on its port side. Women and children trapped in the stern and midship were drowned, some of them agonizingly slowly as the tide rose and water filled their compartments. Not a single woman or child from the quarters segregated for married couple survived the sinking. Only one child from any part of the ship made it out alive; the majority of the survivors were men.

In all, 562 people "were hurried to eternity" that night, as the inquiry put it. Close to 300 were buried in mass graves nearby; a few were taken to Halifax to be claimed by family; and many were lost forever. Bodies were recovered for weeks after, some of them many miles from the crash site.

The authors write that the White Star Line did its best to forget the disaster, striking the name SS Atlantic from all its public records. Not that there was much resistance to this: The authors also point out that the incident occurred in a century when people accepted marine disasters as a fact of life; no one considered the Atlantic to be "unsinkable." As well, there was not the same media scrutiny in 1873 that there was 39 years later when the Titanic went down, and the public moved on quickly.

The Atlantic sinking was so far from the public's mind that, when the Titanic sank, no one in the media linked it to the White Star Line's first disaster at sea. Today there is a small monument at Sandy Cove, N.S., in honour of the victims. It was erected in 1905, 32 years after the SS Atlantic went down. The White Star Line helped pay for it. 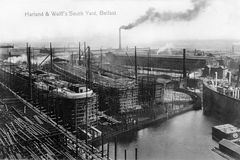