Some people love to hate Miranda July; others love to challenge those who hate her. It's telling that the best depiction of July-hatred was performed by the artist herself. In Me and You and Everyone We Know, the 2005 film she wrote, directed and starred in, her character, Christine, sidles up to a shoe salesman, Richard, whom she doesn't know but has fallen for anyway. After a whimsical exchange, in which they compare the street they're walking on to their hypothetical life together, July surprises Richard by hopping into his car.

Their flirtation, while unsupported by any evidence of compatibility, is too cute to not be meaningful. That's July to her haters: bright-eyed, expectant, and flaky. Maybe she represents us at our dippiest and most ripe for humiliation, right before we learned the hard way that intimacy doesn't just happen. "I don't know you," Richard says, angrily. "And you certainly don't know anything about me… can you get out of my car now?"

They come together in the end – not by the dictates of twee, but because they figure out their dynamic. July's fiction works – and it does work – as a fantasy of connection on its own terms; but July, a multidisciplinary artist, works with reality, too. Her non-fiction projects are often about encouraging unlikely connections IRL, where they don't always land so well. And these projects can seem cloyingly idealistic, even to a fan – July is the one who, at the grownup party, suggests a game of charades.

Many who love Miranda July hated her until someone challenged them. I'm one of those – I read her 2007 short story collection, No One Belongs Here More than You, at the insistence of friends, and fell in love with both her prose and the freedom she affords her characters. Making Love in 2003 – in which a 24-year-old teacher falls in love with her 15-year-old student, convinced he is the human incarnation of her alien ex-lover – contains the best account of lovesickness I've ever read: "I was actually writhing in heartache, as if I were a single muscle whose purpose was to mourn." She describes feelings as plainly as objects.

"In general I'm trying to make a space where it's not clear, or maybe not even interesting, whether someone is good or bad or crossing a line," she told Rachel Kushner in an interview for BOMB Magazine. "Instead, the focus is on what the individuals are feeling, their ability to reach through the web of their own fears and fantasies and connect with someone else, regardless of how appropriate this connection is, and it often isn't."

This week, July will publish her debut novel, The First Bad Man. It's as tight as I worried it wouldn't be – her stories have a way of just accumulating plot, so that, by the end, you barely realize how ridiculous they'd seem in summary. The book's central relationship is that of the narrator, Cheryl, a middle-aged Angeleno who works for a women's self-defense non-profit, to Clee, her bosses' 20-year-old daughter, who comes to stay on her couch indefinitely. Cheryl is solitary and truly eccentric, in that she doesn't see herself that way; Clee is beautiful but angry, ungrateful, and filthy. She gives off "a brothy, intimate musk."

Their enmity becomes a bond – a special, life-brightening one, which they express by simulating self-defense scenarios. ("Adult games," Cheryl calls them.) Like many of July's stories, The First Bad Man leaves you with the exciting sense that such random and fulfilling connections – though you might imagine different ones – could be possible in this world, plus the wistful understanding that they usually aren't.

Contrast The First Bad Man to her other most recent work: the Somebody app, launched this August. It's a messaging service with a twist: rather than going directly to its recipient, your message goes to someone physically close to them, who delivers it in person. Technically speaking, Somebody has worked better in theory than in practice (an improved version is in development), and when it does work, the results are not always enjoyable.

In the inaugural episode of Reply All, a podcast which tells stories from the internet, a man named Sam describes the time a total stranger showed up at the bookstore beneath his workplace and asked for him by name. "It's me, Ariel," the stranger announced, in front of the whole store. "I [really] love you, and I don't know how to tell you." Ariel was a woman Sam had been seeing, who had recently moved to DC.

Reply All's hosts, PJ Vogt and Alex Goldman, had been curious about the app, but a little bit skeptical. "People always complain like, 'I hate the internet, it's all mediated, I want something real' – do you?" says Vogt (who is, full disclosure, a close friend) over the phone. "Online, if someone says something I don't want to engage with, I can just favourite it. The way that, when you're in a car, all you can do is honk at people." A button makes life immeasurably easier.

But Vogt is a fan of July's non-fiction work. Not out of blind faith in her projects, but because he relates to the ways in which they fail. He points to her 2011 book, It Chooses You, for which she interviewed people selling goods through classified ads. These interviews were awkward, and sometimes brutal, but that's part of the project. Likewise, the Somebody app is not about spontaneous, immaculate connection, but the messiness of actually interacting with people: July's work isn't about making fantasy reality, but exploring the dissonance between them. ("The audience doesn't know that it is I who would kick someone like [Christine] out of the car," she told Kushner. "…She is simple because she is just my perpetual hope and dreaming.")

For Sam, Somebody didn't bring spontaneous wonderment, but an uncomfortable, "brothy" human experience. It's not like he bonded with the stranger at the bookstore – they took a selfie, and then Sam went back to work. He didn't relish having to hurt Ariel's feelings. But he'd signed up for the app. He'd told Ariel about it in the first place. "Everyone hates being jostled into some interaction, but it's hard not to be onside of something that's trying to jostle people a little bit," Vogt says. "Even if you hate charades, your hatred of charades makes you talk." 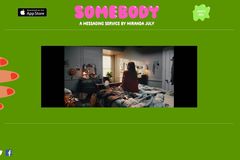