Tracy Chevalier is the author of eight novels, including The Last Runaway, At the Edge of the Orchard and Girl with a Pearl Earring, and is the editor of Reader, I Married Him: Stories Inspired by Jane Eyre. Her latest novel, New Boy, was inspired by Shakespeare's Othello, and was recently published by Knopf Canada. She lives in London.

Hogarth Press asked me to take part in the Shakespeare Project, where authors write a novel inspired by a Shakespeare play. Writers taking part include Margaret Atwood, Anne Tyler, Jo Nesbo. I chose to retell Othello, because it's the quintessential story of an outsider and I'm something of an outsider myself, having lived my adult life as an American in Britain. While I haven't experienced the level of discrimination Othello goes through, I'm fascinated by how people treat others who are different from themselves. I decided to set New Boy in an American school in the 1970s, the same time I was growing up. I went to a school that happened to be mostly black, so I got some sense of what it is like to be set apart by your skin colour.

An old boss once gave me an eraser with Less Is More written on it – a phrase usually associated with the modernist architect Mies van der Rohe. When I got to know Vermeer's paintings better, I noticed he stripped away a lot of the clutter Dutch painters filled their works with. Girl with a Pearl Earring is perhaps the most stripped-down painting of all, but there is still so much in a look and an earring. I imitated Vermeer in my prose, paring down the sentences, using adjectives and adverbs sparingly, and I've kept on writing like that since.

When I was 10 my parents gave me Anne of Green Gables to get through the days when I had the flu. I gobbled it up, and reread it so many times throughout my childhood that my copy fell apart. Even now I occasionally read it as a guilty pleasure. It's perhaps saccharine compared to today's fare, but it is also full of vivid drama. Orphan Anne Shirley has had a deprived childhood, though she doesn't play the victim card. It's very much a character-driven book, with the secondary characters equally memorable, such as the snobbish Mrs. Lynde, po-faced Marilla and Anne's nemesis/love interest, Gilbert Blythe. Best of all, the book is a paean to the natural world, with glorious descriptions that make you want to get outside more. For that reason alone, 10-year-olds should read it and then go for a walk.

"Over his shoulder I saw a star fall. It was me." That is from Falling Angels, my third novel, set primarily in London's famous Highgate Cemetery. The lines quoted are by a dying character. It's a challenge to describe death in a meaningful way, since we can't know what it's like until it's too late to write about it. Most do it using metaphor. I wrote the first sentence describing what was literally happening – she sees a shooting star over someone's shoulder. The second sentence then makes it metaphorical. Readers have told me those lines made them cry. Good!

Both. The beginning has to suck you in or you'll never keep reading. But the ending is what most readers remember afterward. You want it to be satisfying and tie things up, but not too much. And it needs to be surprising without being inconceivable – a balance that is very hard to get right. 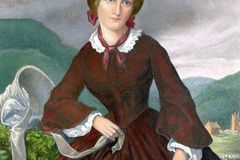 Scott Turow: ‘In legal thrillers it’s rare to hit upon a setting that seems completely new’
May 26, 2017
Colm Toibin: 'I like the idea of the blurred figure in the photo, the person at the edge of a story’
May 19, 2017
Follow Mark Medley on Twitter @itsmarkmedley
Report an error Editorial code of conduct
Due to technical reasons, we have temporarily removed commenting from our articles. We hope to have this fixed soon. Thank you for your patience. If you are looking to give feedback on our new site, please send it along to feedback@globeandmail.com. If you want to write a letter to the editor, please forward to letters@globeandmail.com.
Comments