Solipsism, noun: a theory holding that the self can know nothing but its own modifications and that the self is the only existent thing; also: extreme egocentrism.

I experience outright panic every time I see the word solipsistic on a page, but people use it all the time. In the past week alone, it has shown up in a review of the new James Brown biopic, Get On Up ("But he ended up in a solipsistic dead end, artistically irrelevant for decades and lost inside his own legend."); in a profile of Jeff Bridges in the magazine of the American Association of Retired Persons ("Bridges has his own ways of warding off solipsism. One is his work against hunger."); and in an essay by Robert Kagan in The Wall Street Journal ("Then as now, Americans and Britons solipsistically believed that everyone shared their disillusionment with war.")

I mention solipsism because I had a solipsistic experience on the weekend in Ottawa, that most solipsistic of towns: I attended the Great Canadian Theatre Company's world premiere of The Boy in the Moon, playwright Emil Sher's theatrical adaptation of the non-fiction memoir I wrote about life with my disabled son, Walker. In the play, an actor named Peter James Haworth plays me, or at least a version of me you might glean from my book.

In other words, I am about to review a play about my life that was based on a book I wrote about my life. That still doesn't qualify as solipsistic, strictly speaking, unless I deny that anything else in the world exists. But you have to admit (if in fact you exist) it comes damn close. We live in a world where we spend more and more time laying out our lives for digital public consumption, then wondering if it's a good idea. If you ever question what value there is in public self-regard, try watching a play about your life with a few hundred people beside you laughing, crying and occasionally yawning.

We sneaked in unannounced to the last preview before opening night, to see what we were in for. My wife, Johanna, was exceptionally nervous. "Up until now, our story has been ours to tell," she said. "I wasn't sure how the playwright would tell it. I thought we might be opening ourselves up to judgment. And I wanted it to be good, not bad." She paused. "Of course, it helps a lot that the woman playing me [Manon St-Jules] is young and gorgeous."

I had had my doubts about a drama based on my book. Playwright Sher (his impressive output includes Mourning Dove, about the Robert Latimer case) didn't invent the dialogue in the play: He assembled it verbatim from the book, and from transcripts of interviews he had with me, my wife, my daughter and my son's nanny. He expands the book's point of view, but it is still nailed to the real, to the actual – and without art and invention I was afraid that "the crudeness of reality would make the world unbearable," as George Bernard Shaw put it. The Ottawa Citizen seemed to like the play pretty well, but headlined its review "Compelling story, less than engaging theatre." That sucked the spirit out of the troupe for an afternoon, until the next performance. Then they ignored it.

As for solipsistically watching other people enact your life onstage in front of a crowd of strangers, I will say this: Make sure they don't play you better or more stylishly than you play yourself. Reporters Bob Woodward and Carl Bernstein were replaced by Robert Redford and Dustin Hoffman in All the President's Men: What was it like to go back into the newsroom at The Washington Post after that? Susan Orlean was transformed via the medium of Meryl Streep from a studious New Yorker writer into a coke-snorting mess in Adaptation, the semi-fictionalized movie version of her non-fiction masterpiece, The Orchid Thief. She objected at first, believing the made-up portrayal would end her career as a journalist. Then Ed Saxon, the producer of Adaptation, pointed out that Charlie Kaufman, its screenwriter (he was played by Nicolas Cage in the movie), had depicted himself as a compulsive masturbator. As Ms. Orlean later told an interviewer, "I thought, you know, he's got a point there. What am I complaining about?"

Peter Haworth is six inches taller, 30 pounds thinner and 10 years younger than I am. I thought of him as a very close match. He tried, unsuccessfully, to meet me before rehearsals began. "I wanted to see you walk through the door," he later explained. Instead, he had to rely on my book and a few YouTube interviews for research. From those dry bones, Mr. Haworth conjured a condensed Brown: He caught my tortured sitting postures, my halting diction, my constant intellectualizing. It was like watching someone with St. Vitus's dance of both the body and the feelings. I thought to myself: Am I really that restless? And when did I become El Pomposo? The answers are yes and don't ask.

We have a jittery relationship to candour these days. We all think we're mysterious and unknowable, when in fact most of the time we're as obvious as an oncoming car. But even as we pretend to live our lives more and more in the open, pasting and posting and pinning more and more bits of our private lives to the public notice board of social media, there are entire swaths of private existence we still hide, still keep deep and secret: domestic fury; our lust for money, and the disgraceful lengths we'll go to for it; and – always – our fear of the Other, be it black or brown, or just broken, like my boy.

Writing a book, and reading one, is a private experience, and in that sense, at least, not unlike raising a seriously disabled child. The more they envelop you, the more the book and the child wrap you in their spell to the complete exclusion of the outside world. But a play on a stage is the opposite of solipsistic. It's a live, public event: The audience responds to the precarious human behaviour onstage, and that reaction becomes a part of the action, which is what makes live theatre changeable, scary, even embarrassing – awkward, as teenagers used to say until about two and a half years ago. In a world that now ingests most of its life off of screens, without anyone having to physically face anyone else, awkward is real, and a relief – and a reminder, of who we still so often are.

Shameless and solipsistic as it is to say, I really liked watching this play that someone else put together about my life. I would say that even if I didn't stand to make a microscopically small amount of money if the play ever breaks even. ("The only thing in theatre that makes me cry every time is my royalty cheques," Emil Sher said one afternoon before a matinee.) The polished direction of Eric Coates, the gifted acting (including that of the astonishing Marion Day, who plays my daughter and nanny and Jean Vanier and others), the haunting sound and music (Samuel Sholdice), all lifted my considered, deliberate words into the rafters, where we feel things.

The result is an untraditional play that is also a public dialogue about the hidden, shame-filled but strangely exhilarating experience of raising not just a disabled child, but any child. I cried when our stage son finally moved to a group home, leaving our house a cave of stillness; I gasped when the Johanna character says, "I hope he dies before I do … I want to see the end of his story," a longing I didn't know my wife harboured; I laughed even at my own jokes. I was a wreck by the end – of the play, I mean, not at the end of raising Walker, though the two are not dissimilar. It closes in Ottawa on Oct. 5.

I think it's telling, though, that one of my favourite scenes is entirely wordless: After yet another disagreement, the Ian and Johanna characters stretch through the space of the stage to the sound of a rhythmic background clapping – a noise you hear a lot in the company of a young man like Walker, who can't talk or reason. It's one language we all speak, the one that reminds us we can't do this alone.

The Boy in the Moon: A Father's Search for His Disabled Son
February 1, 2010 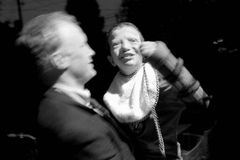 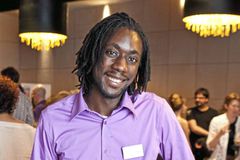 Ian Brown on Andrew Solomon and his new book 'Far from the Tree,' about the limits of a parent's love
November 16, 2012 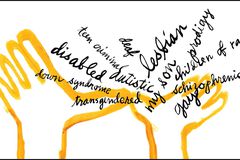