It's not far-fetched to imagine that, in another life, Barack Obama would have become a writer. He's a writer, of course, having published what is considered to be one of the great political memoirs of the 20th century, Dreams from My Father, but he's juggled his literary career with other, arguably more important obligations, such as president of the United States of America.

Still, during his eight years in the White House, Obama established himself as one of the most literary presidents in American history – not simply due to his eloquence and depth of thought, which manifested itself in speeches and interviews, and which has only become more apparent when compared to his successor, but because, even when he was leader of the free world, he seemed most at ease in the world of books.

It can be argued that he identifies as a writer, first and foremost – before community organizer, or lawyer, or politician. In an interview with the New York Times book critic Michiko Kakutani, not long before the end of his second term, Obama admitted that, before entering politics, he dabbled in short stories. "Writing," he told her, "was the way I sorted through a lot of crosscurrents in my life – race, class, family."

He is not only a gifted prose writer, as anyone who has read his work or listened to his speeches can attest, but it's also apparent, simply watching from afar, that Obama possesses the necessary empathy, the genuine curiosity and hunger to learn about the lives of others, that is an invaluable characteristic of great writers.

Penguin Random House is banking on this, in any case. On Tuesday, it was announced that the global publishing company had acquired world publication rights to not only a book by the 44th president of the United States, but another to be written by former first lady Michelle Obama, a book that will be equally anticipated.

"We are absolutely thrilled to continue our publishing partnership with President and Mrs. Obama," said Penguin Random House CEO Markus Dohle in a press release announcing the deal. "With their words and their leadership, they changed the world, and every day, with the books we publish at Penguin Random House, we strive to do the same. Now, we are very much looking forward to working together with President and Mrs. Obama to make each of their books global publishing events of unprecedented scope and significance."

If reports are true, Penguin Random House paid an unprecedented price for the two books. While exact terms of the agreement were not disclosed, the Obamas, who were represented by power brokers Robert Barnett and Deneen Howell of Williams & Connolly, have almost certainly shattered publishing records. According to the Associated Press, the deal is worth "tens of millions" of dollars, while the Financial Times reported it is worth at least $65-million U.S.

To underscore the significance of that number, consider that Bill Clinton received $10-million for his presidential memoir, My Life. According to the press release, Penguin Random House will also donate one million books to the literacy charity First Book, and the Obamas will "donate a significant portion of their author proceeds to charity, including the Obama Foundation."

There is little known about either book. No publication dates were announced, and it has not been revealed which of Penguin Random House's myriad imprints will publish the book – although Crown, helmed by former Torontonian Maya Mavjee, appears to be the front-runner, considering it published Barack Obama's The Audacity of Hope in 2006 and Michelle Obama's American Grown: The Story of the White House Kitchen Garden and Gardens Across America in 2012.

No matter. The books, especially that of the former president, immediately become the most anticipated titles of whatever year they finally arrive in bookstores.

What is not unknown is whether or not Obama can, in fact, write. Dreams from My Father: A Story of Race and Inheritance, published in 1995 when he was on the cusp on entering politics and preparing to run for the Illinois state senate, "surely stands as the most evocative, lyrical and candid autobiography written by a future president," the Times's Kakutani once wrote. This was followed, more than a decade later, by The Audacity of Hope: Thoughts on Reclaiming the American Dream, when he was the junior senator from Illinois. (It was a more traditional precampaign memoir; a blueprint, of sorts, for the presidential campaign he announced a few months after the book was published.)

But now, with his political career (likely) over, it will be interesting to see which route Obama takes – Penguin Random House has invested a staggering amount of money into these books, but the word "memoir" was not included in the press release. There is no guarantee this book is a behind-the-scenes account of his years in the Oval Office, though his publisher must have an idea of the kind of book they've just bought.

Still, from a literary point of view, expect something different compared to other, recent presidential memoirs, such as George W. Bush's relatively paint-by-numbers Decision Points, published in 2010, or Bill Clinton's massive autobiography, My Life, which came out in 2004.

We're talking about a former president who kept eerily up to date on the most important (and critically acclaimed) books being published during his time in office, who counts a Pulitzer Prize-winning author (Marilynne Robinson) among his friends, and who lunched with a bestsellers list's worth of his favourite authors (Junot Diaz, Dave Eggers, Colson Whitehead, Zadie Smith and Barbara Kingsolver) not long before leaving office. He'll probably want to show off his writing chops.

Since the surprising election of Donald Trump last November, publishers have been scrambling to snap up books that explain how America found itself in this position, and where the country goes next. While this will be a chance for Obama to reflect on and frame his time in office – what's his legacy? – it could also serve as a manual for resistance, and a playbook for whichever Democrat is chosen to lead the party into the 2020 election.

The only guarantee is that it's going to be a bestseller. 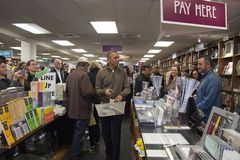