The author is dead – which is darned convenient if you're planning to muck with his characters.

In 1967, the French critic Roland Barthes published his now-famous essay The Death of the Author, calling for literary criticism freed from considerations of the author's biography and intentions. The same year, Jean Rhys won the W.H. Smith Award for her newly published novel Wide Sargasso Sea. A prequel to Jane Eyre, it revealed Mr. Rochester's mad wife to be a Creole heiress caught between black Jamaica and white Europe, and driven insane by the domineering Englishman she is forced to marry.

Today, Wide Sargasso Sea is considered a quintessential example of the literary riches that can be generated when you liberate a text from its author. It's a post-modern classic. Pride and Prejudice and Zombies, not so much.

Somewhere between the provocative rethinking of canonical literature and the fan-fiction mashup, there lies the polite posthumous pastiche. Characters, especially those of genre fiction, can live on long beyond their authors' literal deaths, the lucky ones repeatedly refreshed by film and television adaptations. Sherlock Holmes has been vaulted into the present by both CBS (Elementary) and the BBC (Sherlock) while Daniel Craig's vital new super spy has done much to reinvigorate the flagging Bond franchise. That immortality leaves eager publishers and hungry writers chomping to have another go at the original books, to reimagine Holmes, improve upon Ian Fleming – or produce another Bertie Wooster and a Philip Marlowe sequel to boot.

Jeeves and the Wedding Bells is a new Bertie Wooster novel advertised as "a homage to P.G. Wodehouse" and written by the British novelist Sebastian Faulks. This sequel, say its publishers, remains "faithful to the history and personality of Wodehouse's characters but by shining a different light on them will show how robust, durable and lovable these creations are." The Black-Eyed Blonde is simply "a Philip Marlowe novel" without credit to Raymond Chandler on its cover; it was written by Benjamin Black, the crime-fiction pseudonym adapted by the Irish novelist John Banville.

Of course, the issue is not really the robustness of the characters. With the possible exception of Bram Stoker's Count Dracula, reduced by popular culture to a blood-dripping cartoon, few characters seem to have been done significant literary damage by posthumous sequels. In the public eye, Holmes is immortally perspicacious and Bond is perpetually suave, their cultural currency always high no matter how many cheap paperbacks or bad movies they might grace with their presence. In their way, they are a testament to the accuracy of Barthes' observation that the text is a multi-dimensional thing belonging to whatever audience is receiving it. They are children of the disappearing author, almost as motherless as Jessica and Elizabeth Wakefield (created by a team of ghostwriters who produced more than 150 Sweet Valley High titles under Francine Pascal's direction) or Nancy Drew, kept ever youthful by the anonymous hacks of the Stratemeyer Syndicate. No Virginia, there never was a Carolyn Keene.

The characters seem mighty durable; it's the contemporary sequels that feel more contingent. These books are definitely creatures of their eras – that "different light" is the illumination provided by contemporary sensibilities. Faulks and Banville/Black are gifted writers, their pastiche is always plausible, but both are also acutely aware of the delicate nature of their task.

Faulks has previous experience, having written a James Bond sequel to mark the 100th anniversary of Fleming's birth. His prolific predecessor John Gardner, who wrote 16 Bond books in the 1980s and 1990s, moved the character into his own era, thus avoiding the issues raised by Fleming's evident contempt for anyone who wasn't white, Christian and male. Faulks, on the other hand, set his 2008 novel in 1967, forcing himself to deftly update attitudes rather than just leave them behind. He claimed his "Bond girl" was more intelligent but no less glamorous than her predecessors, although Christopher Hitchens did complain that there was no sex until the final pages.

Similarly, Faulks takes a very light hand with Bertie and Jeeves, and Wodehouse is the easier writer to update – there was never evidence of his alleged Nazi sympathies in the books. Whatever his politics, he was, if not a critic of class privilege, at least a gentle satirist. The wealthy but idle Bertie, member of a club called The Drones, is continually rescued by his brainy butler. Here, Faulks makes Jeeves's superiority a bit more concrete by cleverly reviving the age-old device of master and servant reversing roles: Jeeves finds he must disguise himself as one Lord Etringham to enter a country house where Bertie needs to mend some broken fences, leaving Bertie to play butler. Then Faulks develops a romance that proves the depths of Jeeves's true affection for his employer while revealing that Bertie is not irredeemably stupid after all.

So far, his different light is shining nicely. What's murkier are some passing references to the First World War. Bertie and Jeeves first appeared in 1917 and frolicked right up into the 1970s in a merry England that, rather in the same manner as Agatha Christieland, knows nothing of world war or economic depression. Theirs is a parallel universe. Open a door to the real world with one darker reference and where do you stop? The lovely Georgiana is an orphan because her parents died when she was 14, in the sinking of the Lusitania in 1915; that means Bertie would only need to be two or three years older than her to have seen active service. If a chap escaped the trenches by six months or a year, well, it's the sort of thing a chap might find himself telling the reader especially after a snort or two of Jeeves's Special.

Still, Faulks has set himself the easier task than Black precisely because Bertie and Jeeves live in a rose-tinted fairyland. Driving the streets of Bay City (as Chandler renamed Los Angeles), Marlowe also inhabits something of a fantasy world, but this is no Arcadia; when that California sun does shine it is only to expose the grime on the windows or make the lowlifes sweat uncomfortably in their cheap suits.

Mainly published in the 1940s, the original books were filled with the casual racial epithets of the era, albeit often spoken by nastier characters than Marlowe. Black sets his action in the 1950s as a beautiful blonde perfume heiress walks into Marlowe's office and hands him a case: if her lover was killed by a hit-and-run driver, why did she spot him in San Francisco the other day? The Irish writer scrubs L.A. high society suspiciously clean of any African-American servants: one "negro" janitor makes a very brief and very correct appearance. Instead, Mexicans stand in as the hated Other and it seems likely enough, and thus not particularly offensive, that a private detective of the 1950s would dismiss two Mexican thugs as "wetbacks."

What is an irritant for a contemporary reader is Marlowe's sexism. Aping Chandler, Black offers powerful physical descriptions of all characters but the women are treated to a noxious kind of voyeurism whether Marlowe is salivating over the beautiful heiress or registering his disgust as her overweight mother devours a chocolate cake. It's a kind of retro sexism that is appropriate but boring.

These are the tricky judgments and careful considerations the projects demand, but matching yourself to a master is also a grand game played with equal parts bravado and affection. Both Faulks and Banville/Black (the latter already well versed in adopting a second literary persona) say they are committed fans of Wodehouse and Chandler respectively. No, the prose is never as sparkling – Faulks's is just a bit less fizzy than Wodehouse's; Black's just a bit less driving than Chandler's. No, the writer's literary imagination is never as engaged as it is in a Wide Sargasso Sea or a Jack Maggs, Peter Carey's 1997 rewriting of Great Expectations. Still, the sequels are amusing things in which writer and reader share in the fun: you can almost hear Black gleefully polishing his Chanderlesque metaphors or Faulks giggling as he manages a particularly bubbly Woosterism.

In the end, their existence probably owes more to the literal death of the original authors than to the theoretical Death of the Author: time marches on and copyright eventually expires. Both are projects initiated by the authors' estates and Jeeves and the Wedding Bells is specifically pitched as a means of introducing newcomers to the joys of Jeeves and Bertie while the publisher, Hutchinson in the U.K., is also reissuing eight Wodehouse titles this summer. One senses behind both books canny publishers with an eye on future sales of the Wodehouse and Chandler oeuvre; a dead body or two is not going to stand in their way.

Globe arts writer Kate Taylor is the author of A Man in Uniform, a novel that begins when a beautiful woman enters a lawyer's office and hands him a case. Among journalists, Mansbridge has plenty of company in taking private speakers' fees
February 28, 2014 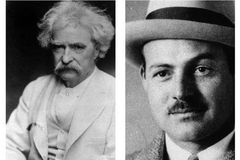