Alexander McCall Smith is in an avuncular mood, his casual, rumpled appearance covered by a smart, tweed sports jacket that one assumes he has hastily donned. It is 10 in the morning. A light cloud of whitish hair sits atop his kindly face. He was up at 3, he explains, writing a commissioned modern adaptation of Jane Austen's Emma – "It's going like a train!" – and then went back to bed at 6:30 a.m. for a snooze, before rising again a few hours later. He writes about 3,000 words a day, sometimes 5,000, he says. But if he's tired, he doesn't show it.

Nothing about the 65-year-old international bestselling author is intimidating. This is the scholar who wrote the leading (and only) work on criminal law in Botswana, where he lived for a few years setting up the law faculty with the University of Botswana. Nine universities have granted him honorary degrees. He was a professor of medical law at the University of Edinburgh, an expert on medical ethical issues, before he devoted himself full-time to his literary career in the wake of becoming a global publishing phenomenon with his The No. 1 Ladies' Detective Agency series, in the early 2000s. (It has sold 20 million copies worldwide.) And here he is, insisting on being called Sandy, reclining in a chair, his cat, Augustus Basil (nicknamed "Gussy"), in his lap.

Earlier, in the kitchen of his Victorian house, the married father of two daughters made me a cup of tea in a delicate china cup, which he encouraged me to bring to his office, a large space of dark mahogany bookshelves, small sculptures, books, papers, magazines, antique furniture, and memorabilia. He has one arm resting on the arm of the low-slung chair, and as he talks, he rubs together the fingers of the hand that he holds out, suspended in the air. The gesture gives him the air of someone completely at ease, someone who is happy to unravel what he knows and thinks, who is curious to see what thought might poke its head up next.

His success seems to delight and surprise him in the way a child might charm his grandfather with his precocious behaviour. "Everything has been a surprise," McCall Smith says when asked about his literary career. "I'm in a constant state of shock," he adds with a chortle. There is a lot of laughter going on in this interview – a sort of light effervescence that comes at the end of sentences and in the middle of others, as something occurs to him.

Such as during this exchange about Bertie, the seven-year-old child of the popular 44 Scotland Street series, who has an international following. "Bertie came into it completely unexpectedly. I was writing a scene with Bertie's mother – I had thought of her – and suddenly, I thought of him walking with her to kindergarten, and he says, 'Careful, don't step on the cracks in the pavement, Mmmy.'"

McCall Smith looks at me to make an aside: "A traditional notion of childhood here is if you do that, bears will get you." Small pause. "I don't know if ..." He seems about to ask if the same is true in Canada, but then a thought leaps in front of his question. "In Canada, of course, that's a real possibility!" he says with a burst of laughter. He composes himself again. "So Bertie tells his mother [about the superstition]. And she says, 'Nonsense, Bertie. Magical thinking!' And then she gets her heel caught in the crack, and over she goes."

Some readers suggested he kill off Bertie's nasty mother, Irene. "And I explained that I couldn't really. Unless it were an accident or something. Because I don't want Bertie to lose his mother. So every once in a while she is removed from the scene ... In the latest book, she wins a competition from Emirates Airways for Dubai Tourism. Irene enters and wins with her slogan –" here, he laughs for a moment before saying what it is "'So Much Sand So Close At Hand,'" he says barely able to suppress his laughter. "So she goes to Dubai for three or four days and by a complicated series of things, she ends up wearing a Bedouin lady's desert outfit and is taken off into the desert. And she's put into a harem," he says between giggles. "And of course, the British chargé d'affaires is doing his best to get her free. But the sheik is a bit unwilling to release her because his wives are being a bit troublesome. Irene has organized a book group," he concludes with more laughter.

I put all that down for you to read so you'll understand it when I say that it's hard to come away from meeting McCall Smith and not find yourself thinking about the generous, quirky nature of his mind. There is so much going on in it. Gratitude for his audience, his gift, the serendipity of his luck, is at play here under these Dalai Lama-like giggles. "I don't have to think," he says of his writing. "I go into sort of a trance." He tells me how he fell into writing children's books – his first foray into fiction, The White Hippo, appeared in 1980 – after entering a local literary competition. "I think many of the things we do in this life are accidental," he muses. At another point, he tells me that he easily writes on airplanes, and once, he spied a woman across the aisle reading one of the 44 Scotland series. "And I leaned across and said, 'There's going to be a sequel to that, you know.' She almost pressed the button to call the crew!" he says. "Then she realized it was genuine."

And there's that, too, you see – he is genuine. The conversation switches back and forth between his work, architecture, his love of beauty, why he collects artifacts and art ("What appeals to me is where they come from; how they fit into a story"), and the joys of the everyday, of people, and what they do, something that is reinforced by his admiration for W.H. Auden, the Anglo-American poet who is considered one of the greatest in the 20th century. Among his many recent titles – his publishers help him keep track of which series to work on next – there's one about him, What W.H. Auden Can Do For You, which is more memoir than literary appreciation. In that book, one learns not only of McCall Smith's erudition, but also his insatiable curiosity. (Once, when he was in Toronto on tour, he went to a used-book store to buy a tome on monastic sign language.) Also on display is his pleasure in fine, high-minded ideas. He writes about Auden's short poem The More Loving One, in which he admits to taking great comfort. It expresses "the hope that we shall rise above the indifference of others, and perhaps even above their animosity, and love them more than they love us."

There's something of Auden in McCall Smith's popular fiction, of course. Benevolence, kindness, gratitude, pleasure in the everyday, the importance of community – these are all recurring themes in his work. He gets many letters from people, writing to say how his books gave pleasure to those who were dying or having a difficult time with the rough and tumble of the modern world. "I don't say, 'I'm going to sit down and do this to be able to make people feel better,'" he explains, when asked if he is aware of these themes, which are, as he puts it, "at the more positive end of the spectrum." But he takes the response from readers seriously. "It is a huge responsibility."

But that sombre note, however noteworthy, is not the way to end an interview that was full of such mirth. Here, this is better. At one point, we got onto the subject of people who send him unsolicited manuscripts. On tour in the U.S., McCall Smith was given a self-published manuscript at a book signing, which he dutifully read. "It was all about this man who was kidnapped by a ship full of nuns," he recalls. "And the nuns were nymphomaniacs!" he practically squeals, lifting his feet off the floor in the process. He giggles not out of mockery, but delight; delight for the wonder of fabrication and for ideas that drop out of nowhere. 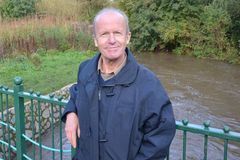 Stoner: How the story of a failure became an all-out publishing success
December 7, 2013 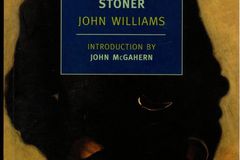 Why novelist Mary Lawson’s imagination is like an ill-suited spouse
December 2, 2013 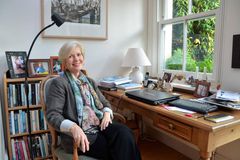