Among fiction writers, especially short-story writers, Jesus' Son by Denis Johnson is passed around almost like gospel. Some 150-odd pages that, at once, hold passages that readers might drift through like a dream, and others that weigh enough to pin the reader flat to whatever spot they're in when they're through with those lines. The economy of Johnson's language, and his control of it, was only matched by the way he elevated his characters far above their lot and their lives, sometimes bluntly, and sometimes with a creative elegance that few writers could hope to achieve in their careers. His handling of addicts, drifters, criminals, murderers and the simply unlucky rang true in every instance. They were all written with deep empathy. I would even say it was love.

Born in 1949 in Munich, West Germany, where his father worked for the U.S. State Department, Johnson moved around the world until he landed in the prestigious Iowa Writers' Workshop. There, he earned his BA and MFA, and later taught the craft. Prolific and versatile, he wrote short fiction, novels, novellas, poetry, screenplays, non-fiction and journalism. All in all, he laid down over 15 works, including Tree of Smoke, which won the National Book Award in 2007, and was a finalist for the Pulitzer Prize. In 2012, his exceptional, haunting novella Train Dreams was a Pulitzer finalist as well.

Johnson died Wednesday at the age of 67. Like many readers, and fellow writers, I first learned of his death late on Thursday, when the news broke and tributes began in the press and on social media. I had just come back from an evening at the Amazon.ca First Novel Award gala, where some of Canada's finest emerging writers were feted for their books. The book that won, The Break, by Katherena Vermette, is a novel about troubled characters struggling with a legacy of suffering and trauma, with violence, and with life at the fringes, and most of those characters are Indigenous women. On a night where the range of Canadian letters expanded and recognized a new, important voice for the marginalized, the voice of this great American chronicler of the poor and delinquent went silent. It is no small joy that we will receive one more book from Johnson – The Largesse of the Sea Maiden is scheduled to appear in 2018 – and this a book of short stories, where his skills were writ large and with undeniable force. It is more heartening yet that Johnson's legacy is firmly built in the bedrock of modern fiction, in his influence on fiction writers, and poets, who internalized the lessons taught by Johnson's language, and who admired his gift for subtlety and understatement.

For me, as for many, I go back to the endings in Jesus' Son, many of which I think on over and over. They come back to you often, and suddenly. Johnson was a master at leaving the reader stunned at the end of his stories, at writing final lines that were crushing and beautiful. Even those that seem cold at the surface are full with life and feeling.

Consider the end of the short story Dundun, where the titular character has shot another man, who later dies quietly on the ride to the hospital. Dundun is a killer, and we learn he kills again later, in the final paragraphs. In closing, Johnson writes:

Will you believe me when I tell you there was kindness in his heart? His left hand didn't know what his right hand was doing. It was only that certain important connections had been burned through. If I opened up your head and ran a hot soldering iron around in your brain, I might turn you into someone like that.

Although he is a killer, Dundun is a friend to F.H., the protagonist for the stories in Jesus' Son. There are no excuses made for the man, but there are reasons considered for why he is the way he is. All of the man is considered, even the tiny bits of kindness left in his heart that a friend might still know, while another person catches a bullet.

Perhaps the most affecting passage Johnson wrote is the ending of his story Out on Bail, where F.H. and Jack Hotel have scored heroin and are hunkered down in their "tiny, dirty apartment." F.H. passes out, and when he wakes, is surprised to be alive. He contemplates how close he came to leaving the place behind. Hotel has also overdosed:

He went into a deep sleep, and to the others there he looked quite dead.

The people with him, all friends of ours, monitored his breathing by holding a pocket mirror under his nostrils from time to time, making sure the points of mist appeared on the glass. But after a while they forgot about him, and his breath failed without anybody noticing. He simply went under. He died.

I am still alive.

When we lose writers and artists that we love, the sense of loss can be overwhelming. But I try to think about that plain-spoken line at the end of this story. Johnson was one of the best writers we had, and he is gone. We are still alive – all of us who are here to remember Denis Johnson and to read the words that he wrote.

Kevin Hardcastle is the author of Debris, which won the Trillium Book Award in 2016. His debut novel, In the Cage, will be published later this year. 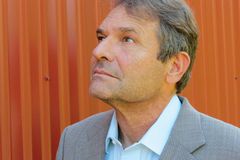 Katherena Vermette wins Amazon.ca First Novel Award
May 25, 2017
Russell Smith: Why we don’t read about work
May 16, 2017
Follow us on Twitter @globeandmail Opens in a new window
Report an error Editorial code of conduct
Due to technical reasons, we have temporarily removed commenting from our articles. We hope to have this fixed soon. Thank you for your patience. If you are looking to give feedback on our new site, please send it along to feedback@globeandmail.com. If you want to write a letter to the editor, please forward to letters@globeandmail.com.
Comments