Novelist Zadie Smith answers questions promptly, ends her answers abruptly and widens her eyes in challenging expectation of the next hesitant sally. But there's no particular question, she insists, that she objects to. "I'm not interviewed that often so maybe I haven't managed a list of hatreds yet," Smith says. "I don't know. Try me and I'll tell you."

We cover the basics. At age 36, the writer who became an international sensation at 25 with her first novel, White Teeth, is now firmly established in the transatlantic literary pantheon with two subsequent novels, essays and reviews, all much applauded. London-born, she teaches creative writing at New York University and lives nearby with her husband and three-year-old child. Another child is coming in March. She wears a turban and jeans and large, black-framed glasses. No pictures, please.

Smith has come to Toronto to publicize her latest novel, NW, named for the postal district of the London neighbourhoods where she grew up – and written in a bravura style that has inspired more than one reviewer to mention Joyce. It arrives here in the same season as Martin Amis's Lionel Asbo, another high-style production set in similarly overlooked neighbourhoods of the great capital, the two books seeming to combine in an aggressive repudiation of the effete "Hampstead novel" that dwells on the lives and loves of North London's more privileged inhabitants.

But Smith bristles at mention of the word "gritty," as often used by reviewers to describe her home turf. "It's really not gritty," she protests. "It's normal life for millions of people. It's how I grew up. It's how all my friends grew up."

It was only after White Teeth came out, Smith adds, that she and her family "found out from journalists who live in Hampstead and Primrose Hill that this is an area that's considered blighted. It wasn't blighted to us."

But it is a place, NW assures its readers, where a young man can be stabbed to death for refusing to surrender his zirconium ear studs to muggers.

"I've never killed anyone in my fiction yet, so to me it was quite a new sensation," Smith explains, adding that stabbings are now epidemic in London. "Particularly when you're black and you grow up in London, you have a fear for the boys in your family because you don't know what's going to happen to them. So I was just trying to write out of that feeling. It's not a fantasy subject in London. It's a day-to-day matter."

Smith's own everyday life in New York is considerably less dramatic. "It's very prosaic," she says. "I go to the library every day and work my four hours, then I go to the playground to pick up my daughter. And I just do it again and again and again."

When Smith isn't writing she teaches, which is what she once planned to do full-time before White Teeth yanked her into fame.

"I don't know if I could get by without teaching," she says. "It's just something that engages your brain." Her students open her to new thinking. "Otherwise my cultural life is watching kids' shows and listening to terrible kid music."

And not writing. "I'm taking a little break," she says. "I'm tired all the time." She has "absolutely nothing" on the go, and doesn't shrink from the prospect of never writing another novel. "As long as I was reading I think I would be fine," she says. "But in terms of actually sitting in a room and typing for years and years, I think I could probably pass."

It took her eight years to write NW, according to Smith – "such a long slog," but evidence of her faith in the power of the novel.

"I love the novel, it's made my life," she says. "[D.H.] Lawrence said that they're the big bright book of life and I do feel that. They have the possibility of containing multitudes. That's what I love about them."

Love turns to something else when the question of multiculturalism in modern Britain arises – in particular the continuing prominence of anti-immigrant political parties and groups.

"To be constantly asked this by white people gives the idea that multiculturalism is some kind of experiment we're all undergoing," she responds, tartly. "We're just alive like you are. We're not walking around thinking, How is this multicultural experiment going." Smith declares herself "loath to answer questions that give a false sense of the way people live."

Is there no social dimension to be discussed?

"The assumptions you make in that question!" she protests. It's akin, she adds, to asking fighting factions in Northern Ireland "how white people's life is going." And which immigrants are you attacking? she asks. "You mean the most recent? The straw that broke the camel's back? Ethiopians or Poles?"

Zadie Smith is properly fuming now. "Perhaps this is a question I dread being asked," she says. 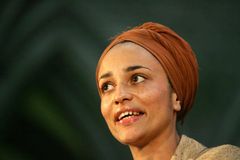 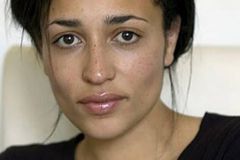