When the winner of this year’s prestigious Hilary Weston Writers’ Trust Prize for Nonfiction is announced on Nov. 5, a woman will take home the $60,000 purse.

For the first time in the history of the prize – and noteworthy for any literary award, especially one for non-fiction – the short list announced Tuesday is made up exclusively of female writers.

The nominated books ask pointed questions about the historical and continuing treatment of Indigenous communities, delve into the complexities of depression, and examine cultural displacement from the perspectives of self-exile and international adoption.

Three of the five nominated books are memoirs and all have strong personal connections for the authors. “The writing that really drew us as a jury tended to have a lot at stake, both personally for the author and also in terms of the kinds of conversations that are taking place in Canada and within the literary world,” Thapa said.

While an all-female short list is a first, female winners have become commonplace for two of Canada’s most prestigious nonfiction prizes. The Hilary Weston Prize (presented in its current form since 2011 but under other names since 1997) has been won by women five times out of the past seven. Past winners include Naomi Klein, Candace Savage and Rosemary Sullivan. The RBC Taylor Prize, established in 2000 and presented in March, has gone to women four times out of the past five, including to Sullivan, Tanya Talaga and Plum Johnson. Both prizes were dominated by male winners in their earlier years.

The Governor-General’s Literary Award for Nonfiction, for which the shortlist will be announced Oct. 2, has achieved less gender balance, having been won by a woman only four times in the past 20 years.

Asked about the dominance of personal stories on an all-female list, Thapa said, “I’m not trying to essentialize what women write and what men write, but I think along with the rise of the memoir and the rise of the personal voice [in journalism] has been this space for a more passionate kind of writing.”

Tuscarora writer Alicia Elliott’s debut author status on the list belies the significant impact she has made on the world of Canadian literature in a short time. Elliott was the recipient of the 2018 RBC Taylor Emerging Writer Award, and is known for her outspoken stance on injustices and inequities in Canada and in its literary community in particular. Elliott is nominated for her bestselling book A Mind Spread Out on the Ground (Doubleday Canada), in which she asks questions about the treatment of Indigenous people in North America through a series of personal and polemical essays that share intimate details of her own life and experience with inter-generational trauma.

Reuters reporter Anna Mehler Paperny also plumbs some dark personal depths in Hello I Want to Die Please Fix Me: Depression in the First Person (Random House Canada), a debut memoir about living with depression. Having survived a suicide attempt in her 20s, Mehler Paperny used her journalist’s skills to understand the disease: her personal story is entwined with interviews with leading medical professionals from across North America.

The third debut on the list comes from Jenny Heijun Wills, who is nominated for Older Sister. Not Necessarily Related: A Memoir (McClelland & Stewart). Born in Korea, Heijun Wills was adopted into a white Canadian family as an infant. Written as a series of fragments, this memoir of connecting with her birth family as an adult asks essential, uncomfortable questions about adoption across cultural and ethnic boundaries. For Wills, the short list announcement brings a particular boost. Her book is published Tuesday.

Ayelet Tsabari is nominated for The Art of Leaving: A Memoir (HarperCollins Publishers). Tsabari has won international acclaim for her short stories but this memoir-in-essays about self-exile from her Mizrahi Jewish roots is her first work of nonfiction.

And Talaga is nominated for her Massey Lecture, All Our Relations: Finding the Path Forward (House of Anansi Press). Talaga’s book explores the high rates of youth suicide in Indigenous communities around the world. She was shortlisted for this award in 2017 for Seven Fallen Feathers: Racism, Death and Hard Truths in a Northern City, for which she also won the RBC Taylor Prize.

The 2019 Hilary Weston Prize shortlist was selected by Thapa as well as fellow jurors Ivan Coyote and Trevor Herriot from 99 submissions. Each finalist receives $5,000. The winner receives $60,000.

The winner, along with the winners of six other awards for Canadian literature, will be announced at the Writers’ Trust Awards in Toronto on Nov. 5. 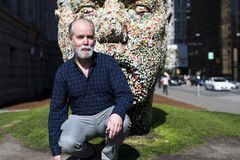