“I look to the future because that’s where I’m going to spend the rest of my life,” the late George Burns once quipped. Fifty years ago, millions aimed to get a glimpse of that future by reading Alvin Toffler’s Future Shock. An instant runaway bestseller as soon as it was published, you’d have been hard-pressed to find a 1970s bookshelf without that distinctive spine, with its then-futuristic, now cyber-retro typeface.

Future Shock’s thesis was relatively straightforward: confronted with the technology-driven, ever-increasing rate of change (what Toffler calls, often, and rather pruriently, the “accelerative thrust”), citizens of the “super-industrialized” era would need to adapt or face a series of dire consequences ranging from anxiety to psychosis to death; consequences Toffler collectively defined as “future shock.” As if to drive home the seriousness of this threat, a tieless Toffler gazes out concernedly from the book’s back cover, hair slicked back, collar unbuttoned, glasses in hand. The look is professorial, with just the slightest whiff of key party.

Toffler’s eagerness to coin a catchphrase in Future Shock is palpable; he never misses a chance to drop it. “It is here that the danger of future shock lies,” is a typical chapter ending, missing only the dramatic thud. But unlike the phrase on which it sought to piggyback, “culture shock,” future shock never quite made it into everyday parlance.

As much as that "shock” suggests something negative and alienating, Toffler, the intelligent, Brooklyn-born son of Polish immigrants (he died in 2016), was extremely sanguine about the future. Future Shock continually expresses his expectation, at once visionary and naïve, that technology will ultimately be harnessed for the social good. Toffler’s concerns are humanist, almost maternal: change is coming, and coming fast, whether people liked it or not. What’s needed is preparation, and coping skills.

Toffler had been investigated by the FBI for his Marxist sympathies (which didn’t stop him becoming an editor at Fortune magazine), so it’s perhaps not surprising that many of his suggestions for combatting future shock involve the creation of government committees whose role it would be to thoroughly assess all new technologies before they were unleashed on society. Another was the establishment of a technology ombudsman “charged with receiving, investigating, and acting on complaints having to do with the irresponsible application of technology.” Toffler also believed individuals should have access to free therapy to treat their future shock. That, too, has not come to fruition, unless you count free mindfulness apps (with in-app purchases).

Despite being a so-called futurist, Toffler saw himself not as any kind of oracle, but as an observer of trends. On that front he got an amazing amount right, especially the big stuff. Cloning, gene therapy, genetic engineering, GM foods, algorithms, the rise of the service sector, the mass use of home computers, the gig economy, VR, the melting of the polar ice caps, the transformation of the arts into “the handmaiden of industry,” reality TV, and IVF are all referenced in Future Shock descriptively, if not by name. What Toffler calls “subcults” (“hippies and hot rodders, theosophists and flying saucer fans ... computerniks, vegetarians, body-builders and Black Muslims”), for instance, have morphed into today’s subreddits.

Future Shock sometimes feels like a game of Marco Polo between Toffler (whom one imagines blindfolded, Speedo-clad, in a liver-shaped pool) and the internet, which he endlessly grazes against in notions of “machines scattered across the globe, linked together by amazingly sensitive, near-instantaneous communication,” or “a worldwide pool of data” (“Polo! You’re soooo close, Alvin!”)

Toffler was certain that technology would soon liberate us from the commuter model of driving an hour to work each day, filling the air with “puke” just to spend the entire day on the telephone, which he viewed as a “form of insanity.” No mention of jogging pants. A bit heartbreakingly, he worried about how we would manage to assimilate the vast amounts of new information and science coming our way, which would surely require a near-constant revision of our worldviews. He worried needlessly. Cable news, social media, and bot-driven propaganda have us all safely sequestered in our ideological and political silos.

Even Future Shock’s missteps and omissions have their charms. The continued glamification of airline travel Toffler envisaged (matchmaking services! theatre!) did not, needless to say, come to pass. And for someone writing near the pinnacle of America’s space age, he was unusually obsessed with the ocean, several times floating the idea that humanity would build Atlantis-like cities deep along the continental shelves.

Toffler saw the trend toward transience – in knowledge, relationships, celebrity, where people lived and worked – as a major contributor to future shock. He may have anticipated the internet, but he did not anticipate the way the internet would allow people and things to linger around. Tom Cruise has been an action star since the 80s. The Kardashians continue to command people’s attention for no discernable reason. Millennials obsess over Friends, a 30-year-old sitcom. Bob Dylan, whom Toffler includes in a list of soon-to-be irrelevant personalities “parading across the stage of contemporary history,” put out an album this summer. Social media, meanwhile, has “solved” the problem of transience in relationships to an occasionally uncomfortable degree. Thanks to Facebook, plenty of us count our landlord from university and all our exes among our “friends.” Reading about all that problematic transience during the least transient period of the last century, is, in truth, a little wistful-making.

On the plus side, Toffler, a social liberal, was especially excited about how “value turnover” would enable a greater diversity of lifestyles and marital arrangements. Polygamy and gay marriage, he maintained, were on the cusp of becoming acceptable. “The day may also come,” he writes, “when a court decides that a couple of stable, well educated homosexuals might make decent ‘parents’.” That cusp eventually came, of course, albeit 45 years late, but mercifully without the necessity for quotes around “parents,” of even for the latter to be “well-educated.”

In a 1980 interview, on the tenth anniversary of Future Shock, Toffler continued to wax optimistic about the democratizing effects of new technology: “We now have an opportunity to create a really humane society which makes responsible use of what we’ve learned from science and technology.” But while it’s true that the recent, widespread embrace of the Black Lives Matter movement would be unimaginable without the technology that captured the horrors that precipitated it, the term “responsible use” still catches a bit in the throat.

The most obviously dated thing about Future Shock is Toffler’s use – conventional at the time, yet still grating – of “man” as a catchall substitute for “people” or “humankind” (it appears almost 300 times, “woman” only 11). And Margaret Mead is pretty well the only female expert he ever quotes; an irony given Toffler’s acknowledgements, which gush about the crucial contributions made by his wife, Heidi (who would be credited as a co-writer in later books) and his female research assistant.

Reading the battered, heavily underlined, sky-blue copy of Future Shock I purchased online via AbeBooks (owned by Amazon), it struck me that future shock, or something akin to it, does still exist. What’s changed has to do with cause. Surely the collective psychosis of this strange, unexpected future we find ourselves in stems less from the pace of technology – which we actually seem to accept – and more from what that technology firehoses into our palms and laps on a constant basis? The thrust of the non-stop anxiety-induced essays and social-media posts one reads these days isn’t so much “stop the world: I want to get off,” it’s: “stop the internet, I want to get off … for a couple of weeks.” In this respect, at least one catchphrase Toffler popularized, “information overload,” endures. 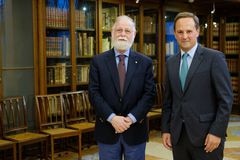 Not all heroes wear capes: Peter Nowak’s new book The Rise of Real-Life Superheroes considers why some do
Subscriber content
September 18, 2020 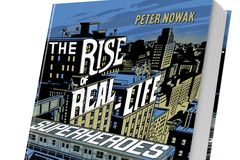 Donner Prize finalists: What keeps them up at night?
September 15, 2020 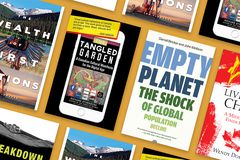 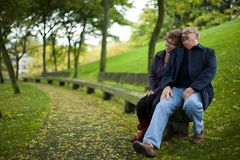