The last time anyone stretched out my first name into so many syllables, it was my mother, and she was very disappointed in me. Perhaps Barbara Amiel is too.

I have suggested to her that the level of vengeance-seeking in her new memoir, Friends and Enemies, is positively Sicilian. While the mafia might rely on concrete galoshes, Amiel’s preference is for the “persecutors” who brought down her husband, Conrad Black, to be guillotined, or injected with Ebola. Possibly her quest for vengeance is operatic, seeing as she adores opera?

“It’s not loving opera, Elizabeth, it’s loving my husband,” Amiel says over Zoom from her publisher’s office in downtown Toronto. “Are you married? Right. If you watched your husband being tortured for 15 years you probably wouldn’t turn the other cheek.”

I don’t want to send things off the rails by pointing out that my husband has not been tried and convicted on fraud charges in an American court, at least not yet. (Black served time in a U.S. federal prison after being convicted in 2007 on three charges of fraud and one of obstruction of justice; two of the fraud charges were later overturned on appeal.)

She’s right, though: I could never reach the level of wifely devotion she showed to Black, her fourth husband. I would definitely not be washing my husband’s underthings in the hotel sink before his trial, nor sniffing his velvet smoking jackets for comfort while he was in the big house. And I definitely wouldn’t describe his speech in an appeals courtroom as “the Gettysburg Address of court speeches.”

Much of Amiel’s 592-page memoir is given over to the tumble that Lord and Lady Black took from the heights of American, British and Canadian society to – well, wherever it is they exist now, socially. This rehashing of a familiar story is understandable from a publisher’s point of view, but also somewhat anticlimactic. Her life before she married Black (which her publisher, inexplicably, wanted her to cut but thankfully she didn’t) is so much more fascinating, and told with the campy brio of a Jacqueline Susann novel. Let’s just say that my pen nearly ran out of ink writing “what??” in the margins of her book.

Take, for instance, the fact that she has been saved twice from penury by mystery benefactors. Once, reeling from a bad marriage to her third husband, David Graham, and living on a Sunday Times columnist’s salary in London, she was invited to a dinner that ended at a casino where the Australian mogul Kerry Packer was winning big. As a reward for bringing him good luck, he wrote her a check for 100,000 pounds.

“There I was,” says Amiel, who is now 79, “absolutely bloody broke, worrying like mad, going out to this dinner and finding myself in this casino, and really trying to refuse [the money.]” The friend she was with insisted that Packer was just offering her a tip, so she took it and put a down payment on a London flat. Later, when the Blacks' legal bills were running high, an unnamed (but clearly wealthy) friend of Conrad’s gave her $5-million, kind of pin money against a rainy day. That seems remarkably –

“He didn’t give me five million,” she interrupts, as if discussing a grocery receipt. “He gave me three million and his lawyer stopped the rest.”

Like I say: what the holy heck. This is not the kind of thing that normally happens to Canadian journalists, which Amiel was for much of her life, as a longtime columnist for Maclean’s magazine and the first female editor of the Toronto Sun. But then, Amiel’s life has not been normal. She arrived in Canada a child with her mother (from whom she became estranged), stepfather and siblings, leaving behind in England a father who would later take his own life. Strikingly pretty, clever, driven, fond of sex, unapologetically right-wing in her writing, she hit dull 1970s Toronto like a creature from fiction (and, indeed, it was rumoured that Margaret Atwood modelled the character of Zenia in The Robber Bride on her). She disdained feminism, and continues to do so. Amiel, who is Jewish, describes her role at the time in typically understated prose: “Canada’s Bitch of Buchenwald.”

“I wasn’t equipped to be an emotionally stable person,” Amiel says, which is perhaps the flipside of something that her mentor, Toronto Sun editor Peter Worthington, once told her: “Strange things happen to you.” So, in the memoir, we find Amiel briefly imprisoned in a Mozambican jail, and confronting her third husband’s mistresses at his hospital bed (a liaison that led to a failed suicide attempt when the fixture to which Amiel attached her noose came crashing out of the ceiling). She embarks on a relationship with publisher Lord Weidenfeld, whom she finds so physically repellent that she pronounces “holding him is like clutching death.” All the while she is buoyed by a cocktail of codeine, Ribena and Carnation milk.

Things took a turn for the bourgeois when Amiel married Black in 1992. Thus began a period she describes to me as “absolute glam” but which in the book is portrayed as a competition between very thin socialites for the rarest gossip and precious gems. Amiel turned to haute couture and jewelry collecting, and in 2002, fatefully, Anna Wintour and Vogue came calling. It was during this interview that she made a statement – ironically, she insists – that would haunt her, and draw the attention of Hollinger International shareholders: “I have an extravagance that knows no bounds.” Amiel was at the time a board member and vice-president of editorial of the media company, and the couple’s expenses formed part of the company’s suit against Conrad Black.

Now, at the offices of her publisher, Penguin Random House, she sighs. “What role did my display, my poncing around, have? Certainly it was a match to kindling. Conrad keeps saying no, it would have happened anyway. … But it set off a firestorm in the media in England and it certainly did contribute to the beginning of things. And once those things begin they have a path.”

Then she tells me that she is wearing very high heels, for the first time in several years, because she is soon expected at a fashion shoot. Unfortunately, those high heels sent her tumbling on her way into her publisher’s office. I express sympathy (also curiosity over the boots, which she happily shows me, lifting a foot to the camera). Amiel laughs about the incident, brushing it off: “It was just funny,” she says, “here I am, almost 80 years old, flat on my face.” She is swallowing Tylenol in compensation.

It’s hard to reconcile this funny bird with the vengeful hawk in the book, the one who compiled its three lists of “enemies” (various libel lawyers combed the memoir to remove anything legally problematic). On the list are politicians, lawyers, judges, journalists, former friends. I reached out to some of the “enemies” for comment: “She’s irrelevant,” Toronto Star columnist Rosie DiManno says. “I’d be disappointed if I wasn’t on the list,” Toronto filmmaker Barry Avrich says. Former prime minister Stephen Harper never got back to me.

Of course a book about a rich couple grieving their comeuppance could not arrive at a worse time, what with various global blights and apocalyptic gloom on the horizon. About Donald Trump, who pardoned her husband, the author of a flattering biography of the President, she says: “My feelings about Donald Trump are ones of incredible gratitude, obviously, because he gave my husband a pardon.”

But on the larger question about whether the Blacks deserve a lament from the world’s tiniest violin, Amiel offers this self-assessment. “I live today in a house better than 99 per cent of Canadians. I myself was never in prison. I list the things that didn’t happen to me, so why should I feel that I’ve gone through so much? … As I say in the book, I could still go to Chanel when my husband was in a cell sharing a toilet with three other people. How the hell could I complain?”

With that, she’s off to her photo shoot, perhaps to contemplate further the fate of her enemies. 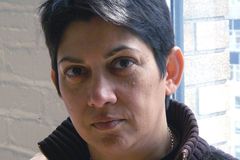 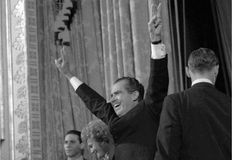