Marsha Lederman and Simon Houpt
Published May 1, 2020 Updated May 4, 2020
For Subscribers
Comments
Text Size
Please log in to listen to this story. Also available in French and Mandarin. Log In Create Free Account

Jane Davidson, the artistic and executive director of the Sunshine Coast Festival of the Written Arts, spent Tuesday of last week in back-to-back calls with authors and others in the publishing industry, sharing the decision she never wanted to make. Then at midnight, she hit send on her newsletter: The 2020 festival was cancelled.

“It was agonizing, I have to be honest,” says Davidson, about deciding to cancel. “I’ve been making myself crazy since the middle of March.”

Davidson’s festival is an anomaly: It’s held over a mid-August weekend, two blocks from the ocean in a small B.C. coastal town, weeks before Canada’s fall literary festival circuit gets in gear. But her decision nonetheless increased the urgency for the country’s big literary festivals.

“If one of us falls, it affects all of us,” Vancouver Writers Fest artistic director Leslie Hurtig says. “And it’s why we have to tread so carefully right now. So Jane’s news is not that unexpected, but it does push that timeline a little.”

While Vancouver and some of Canada’s other major festivals, including the Toronto International Festival of Authors, do not yet know the final shape of the events they will be staging this fall, one thing became clearer this week: Even as more of them scrap their programming entirely, a growing number are scrambling to move some, or all, of their events online.

Even if public gatherings are allowed by the fall, audiences may be reluctant to cram into theatres. And international authors will almost certainly not be travelling.

By some measures, literary festivals are among the most vulnerable to the current pandemic. “We tend to do extremely well with the retired crowd, and also with university students,” said Sean Wilson, the artistic director of the Ottawa International Writers Festival, who acknowledged that the former group is among the hardest hit by the novel coronavirus, while the latter is among the most likely to spread it. “It’s a perfect storm.”

But festivals may also be among the best poised to capitalize on the global shift to online events. At their core, literary festivals consist of authors reading or discussing their works: a low-fi act that doesn’t typically require slick production values. Still, festival directors worry about what is lost when readers don’t share the same space as a beloved author, or one about to be discovered. And monetizing the events is a whole new challenge.

Canada’s fall literary festivals are part of an ecosystem in which writers, publishers, booksellers and fests rely on each other.

“We’re really very cognizant of the role we play in supporting the new works of authors and the publishers in Canada, not to mention the independent booksellers,” Hurtig says.

Festivals have “always been pivotal to how we market. They’re kind of core,” says Sarah MacLachlan, the publisher and president of House of Anansi Press. “As a publisher, you’re doing two things. You’re trying to create readers and introduce readers to your writers, but you’re also trying to satisfy your writers’ desire to be in out in the world and talking about their books. And so [festivals are] kind of a perfect marriage.”

The fundamental question for festivals now is how to make their events stand out in a landscape suddenly awash in online live programming.

During a Zoom call this week, more than 20 directors of festivals across the country brainstormed, shared plans and discussed their options. “There’s a lot of energy and creativity going into trying to create really interesting work-arounds,” says Charlene Diehl, director of the Winnipeg International Writers Festival, which this week decided to move its September event online – although it may add in-person events, if possible. “I came out of that meeting with some more courage and some ideas and really a sense that we all know how to support each other.”

One of the people on the call was Jael Richardson, whose Festival of Literary Diversity decided early into the shutdown to move its festival online. All eyes are on FOLD, which kicked off April 30 and runs through the weekend.

The bilingual Frye Festival in Moncton was among the first to try a new approach. It cancelled its April festival on March 17, and within a week had programmed an entirely new online festival, with prerecorded Zoom interviews broadcast on Facebook Live.

“I think for us, not having time to think about what it all meant actually worked to our advantage,” English programmer Danielle Leblanc says. She says that led to some positive surprises: Readers could listen to the conversation while asking questions of the author through chat, “which couldn’t happen in a real-life festival setting.” Some donations came in during the festival. And the audience numbers exceeded the festival’s usual attendance, with 73 per cent of people watching in New Brunswick and 23 per cent from elsewhere in Canada, but also a handful of viewers from as far away as Congo, Argentina and Bangladesh.

At FOLD, Richardson expects to reach as many as 4,000 unique viewers, an impressive jump from the 1,000 or so audience members the Brampton, Ont., festival usually draws.

But festival directors are struggling with the question of how effective these virtual events might be.

Whistler Writers Festival director Stella Harvey worries that a virtual festival won’t have the same vibe or intimacy for which her weekend festival is known. “And furthermore, by October, people might also suffer from ZOOM fatigue,” she adds. “This has already started for me, and it’s early in the game.”

Ottawa’s Sean Wilson says the essence of a festival is “being in a room with fellow readers, and being right there and hearing from somebody as they share their inspiration and share what they’ve gone through and how they’ve written their books.” He adds: "I’ll confess that the ones I’m seeing online, it’s not working for me the way that a live event does.”

Vancouver, with the festival currently planned for Oct. 19 to 25, is weighing two scenarios: an all-virtual festival, or a smaller one that is a combination of digital events with some intimate in-person events – with audiences of, say, 20 people – that could be professionally produced and then broadcast virtually.

“What authors or interviewers are lacking virtually is the reaction of the audience and the energy that comes out of that experience, where you actually gain something from the people near you," Hurtig says.

Calgary’s Wordfest had been gearing up for a big 25th anniversary celebration which chief executive Shelley Youngblut says “was going to be fabulous and wonderful and completely unique.” Now, they have tentatively moved an online/live hybrid version of it to the third week of November. That delay “gives us some breathing space for now.”

In the meantime, only two weeks into the shutdown, Wordfest began holding weekly “Online Happy Hour” conversations on Zoom – something the festival had been planning anyway to present authors they could not entice to come to Calgary. “This just jump-started it,” Youngblut says.

In addition to engaging a hungry audience, the events are helping Wordfest prepare for the fall. “In basically a month we’ve tried to build up our broadcasting ability, and we think we can go even further.”

One aspect which festivals have not yet fully reconciled is the need for revenue from ticket buyers. While costs are down for many festivals, because they no longer have to pay for venues or fly in authors and put them up in hotels, technology costs are rising.

“Obviously, one of the challenges is, how do we develop a culture of paying a ticket price?” asks Roland Gulliver, the new artistic director of the Toronto International Festival of Authors. “We’ve had that rush of people wanting to create stuff and connect and make things accessible. But for cultural organizations and writers and artists, how we monetize that is a big challenge. Because the mindset is that, if you get something digitally, it’s free, and if you have to pay for it, you look somewhere else. That’s maybe a behavioural change that has to come.”

Still, there are other rewards from the shift that are lovely and unforeseen. A few weeks ago, Eden Mills Writers’ Festival artistic director Nicola Dufficy tuned into the book launch on Facebook of author Alison Wearing’s Moments of Glad Grace, part of the National Arts Centre’s Canada Performs series created in response to the pandemic. Staged at The Common pub in Stratford, Ont., the evening featured a reading by Wearing, backed by a musician (sitting more than two metres away from her) who helped create a properly Irish mood for her Dublin-set book. A glass of Cutty Sark sat to her side.

As the event began, Dufficy messaged her mother-in-law, who lives in Queensland, Australia, and suggested they watch together. “And so she sat in her living room at 10 a.m. [Australian Eastern Standard Time] and I sat in my living room at 8 p.m. in Toronto, and we both watched it. And then we phoned each other and talked about it off afterwards.” To date, the video of the event has attracted more than 3,000 views.

Some weeks later, Dufficy was speaking with Wearing about the experience. “And I said to her, You know, in this time of physical disconnection, in a strange way, we’re more connected to one another than ever before.” 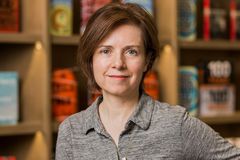 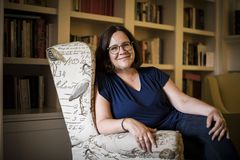 Follow Marsha Lederman and Simon Houpt on Twitter @marshalederman @simonhoupt
Report an error Editorial code of conduct
Due to technical reasons, we have temporarily removed commenting from our articles. We hope to have this fixed soon. Thank you for your patience. If you are looking to give feedback on our new site, please send it along to feedback@globeandmail.com. If you want to write a letter to the editor, please forward to letters@globeandmail.com.
Comments