Marsha Lederman
Published May 25, 2021 Updated May 25, 2021
Comments
Text Size
Please log in to listen to this story. Also available in French and Mandarin. Log In Create Free Account

For Shakespeare historians, academics and aficionados, it is the Holy Grail. People have searched high and low for any book that belonged to the Bard for hundreds of years. It has been called the greatest mystery in literature.

To write as he did, William Shakespeare must have owned books. Could they have melted into thin air? Is the search for any extant volumes a wild goose chase?

A Canadian professor believes he has made a momentous discovery on this front. Robert Weir has spent more than four years researching the provenance of a 16th-century book of works in Latin by the Roman poet Horace. Using a method of reverse-referencing, followed by years of research, Weir feels confident that it belonged to and was marked up by the Bard. And he’s ready to make his findings public.

“This ... is ... the first known book from Shakespeare’s library, though scholars have been seeking such a thing since the 1700s,” Weir says in a paper delivered to the Classical Association of Canada, which is running its annual conference online this week.

“Arguably, we’re talking about the most valuable book in the world,” Weir told The Globe and Mail.

Weir has identified annotations and signatures – including, he posits, Shakespeare’s – that were literally washed away in 1731. The annotations appear to correspond to the playwright’s work – a key clue upon which he has based his theory.

“His name is in it several times. And then his initials are also there,” says Weir, who received his PhD from Princeton University in Classical Archeology and is a professor in the department of Languages, Literatures and Cultures at the University of Windsor. He is also a bibliophile with an interest in the provenance of rare books. “The signature seems to be consistent with his known signatures.”

The search for Shakespearean material has been riddled with countless forgeries, false leads and wishful thinking. The discovery of a definitive artifact would be historic.

“If this is true, then it’s up there with one of the biggest discoveries in bibliography and early modern studies,” says Stuart Kells, author of Shakespeare’s Library: Unlocking the Greatest Mystery in Literature.

“Because the stakes are so high, the bar of evidence is also very high,” Kells says. “For this to be accepted as a valid set of discoveries it really has to get through very, very significant scrutiny and it needs to win over the main Shakespeare community through independent verification.”

It is a small book – about 300 pages, approximately 18 centimetres in height – and was published in 1575. It has gone through major alterations. Most significantly, Weir says the book underwent what he calls “the great washing” in 1731 by its well-meaning owner. As was common practice, the book, he believes, was washed, trimmed and re-bound for aesthetic reasons. Much of Weir’s detective work has concentrated on imaging and reconstructing the water-soluble annotations and ownership signatures.

The volume was purchased in 2001 from a bookseller in Oxford, England. There was no inkling of any Shakespeare connection when the collector approached Weir in 2016, hoping to learn more about his acquisition.

Weir went through the book, looking for attributable passages. He noticed that there seemed to be a pattern in the notations, which occurred in the Odes. Poets at that time commonly marked up books in this way.

“So then I just started spit-balling,” he says. “Obviously Shakespeare was near the top of that list. And the closer I looked, the more I thought, ‘jeez, it really does seem to match him.’”

It is well established that Shakespeare used material from other sources, one of whom was Horace, a lyric poet and satirist who lived in Italy from 65-8 BC. The annotations in the book overlapped to a large extent with Shakespeare’s borrowings – most of which came from the Odes, poetry that had not been translated into English during the Bard’s lifetime, and thus was not commonly known.

His working hypothesis is that Shakespeare may have acquired the book from the Earl of Oxford (whom some consider to be the actual author of Shakespeare’s work) and that this may have happened during Shakespeare’s so-called lost years of 1585 to 1592. He believes the earliest annotations may have already been present when Shakespeare got his hands on it, acting as a sort of roadmap and alerting the playwright, whose Latin was not first-rate, to the best parts.

“I think to a large extent the smoking gun is that the pattern of borrowings is corroborated by the visible annotations,” says Weir, who used ultraviolet imagining and digital enhancements in his research. “It’s a bit like getting Al Capone on tax evasion. It’s not colourful, it’s not glamorous, it’s not sexy, but it is more objectively provable.”

In his paper, Weir – who is writing a book about the discovery – anticipates some of the obvious questions. Might the marks have been made much later to highlight Shakespeare’s borrowings? “No, this is all but impossible,” he says. The marks would have to predate 1731, because some of them were damaged by the washing.

So couldn’t those marks have been made by someone studying Shakespeare before 1731? Weir says there was not a great scholarly interest in Shakespeare’s textual sources and inspirations until Samuel Johnson’s critical edition of 1765.

Could it just be a coincidence – the correspondence between the markings and Shakespeare’s use of that material? Weir says mathematically the chances of that would be “truly miniscule.”

As for whether someone other than Shakespeare may have made those markings during the Bard’s lifetime or shortly afterward, Weir says that’s unlikely. One would have had to be exceedingly familiar with Shakespeare’s plays – which were only published after his death and not widely circulated.

Still, all that glitters is not gold. And nobody knows this better than Kells, who spent years working on his own book and who, since its publication, has been approached about many possible discoveries. Weir is among those who have reached out to the Australian author with his findings.

“Robert’s work is an intriguing contribution to that field,” Kells told The Globe. “I’ve not yet seen a full explanation of his method. I’d like to know more about that, and I’d also encourage Robert to share his methods and findings with one of the major Shakespeare libraries. … That way, his findings can be independently verified, and further discoveries may also be made.”

Weir has been in contact with Heather Wolfe, curator of manuscripts at the Folger Shakespeare Library in Washington. “She has been cautiously skeptical and cautiously optimistic,” Weir says. He is hoping to obtain further results before approaching her for an official assessment. Wolfe declined to comment.

When asked what he would say to anyone dubious about his possible discovery, Weir says there’s no reason to suppose a book owned by Shakespeare would not appear, although it likely wouldn’t have his signature boldly splashed across its title page. “We’re looking for something that would be more subtle.” Shakespeare might have had a reason to be discreet. Further, he likely wasn’t thinking about his legacy.

“He was just a jobbing playwright after all, one of many,” Weir says. “He didn’t really know what we would think of him hundreds of years later.”

Guardians of a mysterious Shakespeare portrait are running out of time and money to keep it in Canada
September 8, 2020 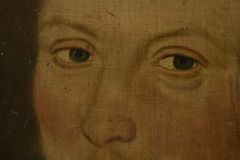