To: Heather Reisman, CEO of Indigo

From: Allen Lau, CEO of Wattpad

AI Superpowers by Kai-Fu Lee is a must for anyone interested in technology, labour and geopolitics. It’s an eye opener for those curious about the profound impact of AI.

To: Cherie Dimaline, author of Empire of Wild

In Love With The World by Yongey Mingyur Rinpoche is about his journey from the cloistered environment of a Tibetan monastery to the outside world. It was a true gift from the person who brought it to me and it’s a wonderful gift to share.

The Vagina Bible by Dr. Jen Gunter is a tell-all about the most secretive and powerful place in the world. I could also see Aurora doing a skit from it – dressed in a hooded pink robe, making the sign of the cross: “In the name of the clitoris, the perineum and the outer labia. Amen.”

To: Dr. Jen Gunter, author of The Vagina Bible

I’m choosing a collection of short stories by my favourite author, Ursula K. Le Guin. It’s called The Birthday of the World; all the stories are about different ways humans could choose to mate, marry and hook up. (Jen works so much with vaginas, this is like applied vaginal studies.)

To: Chrystia Freeland, Deputy Prime Minister and author of Plutocrats

Roughing it in the Bush by Susanna Moodie is a fascinating read of immigrant life in early Canada, detailing the harsh realities for women as well as their strength. Themes that still resonate.

To: Alex Trebek, host of Jeopardy!

Roch Carrier’s Montcalm and Wolfe, which I am reading in its original French and English translation, tells the story of two generals who forever changed the course of Canadian history.

To: Chris Hadfield, astronaut and author of The Darkest Dark

As the first Canadian astronaut to walk in space and operate the Canadarm, Chris Hadfield is a perfect match for Yuval Noah Harari’s 21 Lessons for the 21st Century. It deals with robotics, artificial intelligence, the future of our universe and many of the algorithms that Chris has had experience with. Definitely the right book for him.

To: Clive Thompson, Wired columnist and author of Coders

A Brief History of Everyone Who Ever Lived by Adam Rutherford will need to be read over the holidays, as Clive will need to constantly talk to people about the book’s revelations on humanity’s wild origins and quirky behaviours.

I picked The Thrilling Adventures of Lovelace and Babbage by Sydney Padua. It’s a wild, hilarious re-imagining of the 19th-century inventors of modern computation as steampunk crime-fighters. Hard to describe, hard to put down. Also: Sydney grew up on the Canadian prairies!

To: Simu Liu, star of Marvel’s coming Shang-Chi and the Legend of the Ten Rings

Simu’s a busy, busy man so I got him racy short stories that he can gulp with protein shakes while on set. The title alone addresses every actor’s insecurity and every viewer’s envy: Shut Up You’re Pretty by Téa Mutonji.

To: Louise Penny, author of A Better Man

As a fellow dog lover and someone who recently said goodbye to my best friend, I wanted to share this book, Eileen Myles’s Afterglow (A Dog Memoir), about four-legged love, with you.

Mordecai Richler’s Solomon Gursky Was Here is one of my favourite books. Set in Montreal, a city we both love, the book is funny, warm and brilliant. Just like Sass.

To: Thomas King, author of A Matter of Malice

The Gift by Hafiz (translated by Daniel Ladinsky) soars through the spiritual side of humanity while keeping its feet firmly on the earth. It echoes through the heart.

With Beverley McLachlin moving from law to fiction, I thought a copy of On Writing, Stephen King’s excellent book on writing techniques and the writing life, would be a good gift.

To: Naheed Nenshi, Mayor of Calgary

Guy Vanderhaeghe’s The Last Crossing offers not only a physical journey through a landscape of savage beauty, but a spiritual journey to ultimate redemption. Mayor Nenshi, a proud Albertan, will love this book.

Calgarian Will Ferguson is normally known for his humour and wit, but 419 is as harrowing as it is relevant. Thought provoking and vital.

Because Lee is such a powerful poet, I will give her Michael Crummey’s The Innocents. Crummey’s lyrical prose reflects and refracts the rhythms of the seasons and the body as he tells a chilly story of survival. Happy holidays, Lee!

Ruth Reichl’s Save Me the Plums chronicles her tenure at Condé Nast’s Gourmet magazine. The perfect gift for any foodie.

To: Robyn Doolittle, Globe reporter and author of Had it Coming

Erik Larson’s The Devil in the White City tells the intertwined story of the 1893 Chicago World’s Fair and serial killer H.H. Holmes. Like Doolittle’s writing, Larson’s investment in meticulous research forms a strong, clear narrative of a true story that seems impossible. I hope she enjoys this book as much as I did!

To: Allen Lau, CEO of Wattpad

When I thought of Allen and Wattpad, I began wracking my brain for groundbreaking tech sci-fi. The choice was obvious: Neuromancer by William Gibson. I first read this book in Grade 11 English class and keep coming back to it. This thrilling story follows a hacker in a future technologically advanced dystopia. 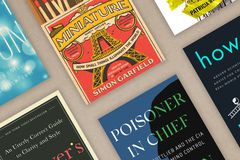 Follow Judith Pereira,  on Twitter @perej
Report an error Editorial code of conduct
Due to technical reasons, we have temporarily removed commenting from our articles. We hope to have this fixed soon. Thank you for your patience. If you are looking to give feedback on our new site, please send it along to feedback@globeandmail.com. If you want to write a letter to the editor, please forward to letters@globeandmail.com.
Comments