Marsha Lederman
Vancouver
Published May 28, 2021 Updated May 31, 2021
Comments
Text Size
Please log in to listen to this story. Also available in French and Mandarin. Log In Create Free Account

It’s tempting to call Michelle Good a late bloomer. She obtained her law degree in her 40s, an MFA in her 50s and published her first book in her 60s. As a lawyer, she has been a tireless advocate for Indigenous people – in particular, survivors of residential schools. And as an author, she has found the kind of success with her debut novel that few would dare to even contemplate.

Five Little Indians won the $60,000 Amazon Canada First Novel Award on Thursday and is nominated for the Governor-General’s Award for Fiction, to be awarded on Tuesday. It is also nominated for the Kobo Emerging Writer Prize, and is also on two BC and Yukon Book Prize shortlists: the Ethel Wilson Fiction Prize and the Jim Deva Prize for Writing that Provokes. Last year, it was a finalist for the Writers’ Trust Fiction Prize and made the Scotiabank Giller Prize longlist. And the novel previously won the Harper Collins/UBC Best New Fiction Prize. Three of those nominations – the GG, Amazon and Kobo – landed on the same day this month.

Even one of these would be a feat for a first-time author – or for any author.

“It’s heart-stopping. It’s so beyond any of my wildest imaginations about how this book would perform and how people would respond to it,” says Good, in an interview from her home in Kamloops, where she lives with her two rescue dogs, Iggy and The Dude (yes, named after that The Dude).

The “late bloomer” moniker isn’t quite right, however. More accurate would be to point to Good’s lifelong growth – fed by, and in spite of, the calamities suffered by her family before she was born – and the devastation in her own life.

Behind Good’s very great year is also a deep grief: one that has helped fuel her – and one that has been helped, in some ways, by writing the book and witnessing so many people connect with it.

“To hear people speak about their reading experience is just phenomenal to me,” says Good, who is of Cree ancestry and is a member of the Red Pheasant Cree Nation in Saskatchewan. “So many readers that have initiated a learning experience of their own – that is the icing on the cake.”

Good was born in 1956 in Kitimat, B.C., one of five children of a Cree mother and French and English father, both from Saskatchewan. Summers were spent with her maternal grandparents on the Red Pheasant reserve, north of Biggar, Sask.

Growing up, Good knew her mother, Martha Eliza Soonias Stiff, had been sent away to school as a child. But, as an avid reader, Good had pictured her mother having the kind of boarding-school experience she read about in British novels.

When her mother started telling stories about what the school was actually like, Good, then a preteen, was shocked.

“I experienced an extreme case of cognitive dissonance,” Good says. “It was … this sense of, ‘How could this possibly happen to my mother?’ And it just became a really living part of my consciousness at a very early age.”

At 13, Good went into foster care. She describes the experience as oppressive and abusive. She did not finish high school, but did find a calling in working with Indigenous organizations.

When she went back to school in Vancouver to get her high-school equivalency, she was introduced to Canadian literature and fell deeply in love. One novel in particular led to what Good calls her “a-ha” moment: she admired Ethel Wilson’s Swamp Angel so much that she read it twice.

“So it means a great deal to me that I’m a finalist for the Ethel Wilson Fiction Prize,” Good says. “The resonance and the full-circle feel of that was so great.”

At 39, Good took some courses at the University of British Columbia and at 40 began law school there, graduating at 43. The racism she experienced there – both systemic and from individuals – was an eye-opener, and further motivated Good’s work in Indigenous communities.

While articling, she was asked to take on the cases of five residential-school survivors. Her path was set – between 2006 and 2014, her full-time practice involved almost exclusively representing survivors.

She decided to go back to school again, beginning her creative writing MFA at UBC in 2011 while still working full-time as a lawyer. Five Little Indians began to take shape during that program.

Published in April, 2020 – nine years after Good wrote the first paragraph – Five Little Indians is the story of five Indigenous people, all of whom attended residential school in British Columbia. The book does not concentrate on their school years, but the aftermath, demonstrating how their lives are affected by the abuse they experienced. The novel is compelling and devastating – a beautiful work of fiction about an ugly Canadian truth.

It is also personal. Good’s mother experienced her own horrors at residential school. For instance, when she refused to eat contaminated food, she was forced to sit with it for hours and hours, and finally hauled into the principal’s office. He told her, Good says, that “she was nothing but an Indian slut and would never be anything but an Indian slut.” She was 11 years old.

Good herself was spared being sent away to school; her mother had lost her status when she married her non-Indigenous husband. But Good was very conscious as she wrote that her characters’ experiences could have been hers. “I’ve been picturing myself in their shoes my whole life, basically,” she says.

Still, writing the novel was a positive experience, one that gave her strength, Good says. “I felt like I was a scribe more than a creator. And I think that these stories were so deeply entrenched in me that it just felt good to speak them – to give them voice, to contemplate the idea of that story being in the world, in the way that I expressed it,” she explains.

But there was also another facet to her personal connection to the work. Good wrote much of Five Little Indians while in the throes of her own devastating, complex grief. Her son, Jay Good, died suddenly in 2013 at the age of 31, the cause unknown. Mother and son were extremely close. “He was my person. I was his person,” says Good, who was shattered by the loss. “He was my only child – so there will be no grandchildren.”

After his death, Good retired from law, but managed to graduate from the MFA program – and complete her novel.

“His spirit was a driving force in me finishing this book,” she says. “His expectations of me, his perception of me – I would have let him down if I had given up. So I couldn’t. I couldn’t give up.”

In her acceptance speech for the First Novel Award Thursday evening, Good talked about the guidance she received from her ancestors as she wrote the book: “I feel that their fingerprints are all over this.”

Good, who turns 65 in October, is working on a second book – a historical novel reaching back to the late 19th century. It has meant taking on a pile of research – which has been challenging but rewarding, she says.

“Time is of the essence, and I am such a firm believer that this is the life we’re given. This is not a dress rehearsal, and if there are things that you feel deeply moved to do, then you must do them – you must,” she says.

“Otherwise when the time comes for you to leap off this mortal coil, you will be filled with regret.” 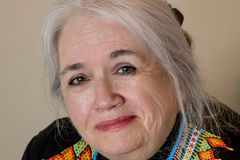