On a rainy morning in May on the concert stage at Toronto’s Harbourfront Centre, more than 1,700 tweens sidestepped, bobbed and swayed in unison, hands held in the air, as Imagine Dragons’ floor-filler Thunder boomed over the sound system. You’d think they were about to see Shawn Mendes or Alessia Cara or maybe Imagine Dragons themselves. Then out walked Joel A. Sutherland and Wesley King, authors of Summer’s End and Laura Monster Crusher, along with eight other writers for middle-grade readers. This mass display of euphoria was no run-of-the-mill concert. This was the Forest of Reading program’s Festival of Trees, arguably the most joyous occasion at which to be a young lover of books in Canada.

Beyond the stage, the Harbourfront Centre site was abuzz with activity. Kids and teens attended workshops with their favourite authors and illustrators, publishers handed out book swag and played book-themed fairground games, a comedian performed stand-up on a central circular stage and a game of giant Jenga was in progress on the lawn.

“I think people expect this festival to be really quiet,” Forest of Reading director Meredith Tutching said, “but it’s chaos.”

As kids get back to their schoolbooks, now is the perfect time to look back at a shining example of a program that encourages students to read, read widely and read Canadian. Run by the Ontario Library Association (OLA), the annual three-day Festival of Trees in Toronto welcomed a record-breaking 12,000 attendees in 2018, including volunteers, publishing-industry types and authors, as well as more than 10,000 book-loving kids.

For the kids enrolled in the Forest of Reading program, the Festival of Trees is the climax of many months spent reading and engaging with books. Young readers get to see their favourite writers up-close at workshops, activities and award ceremonies that cover reading levels from Junior Kindergarten to Grade 12. Most exciting for the readers – and a defining element that sets the Forest of Reading apart from other programs such as the TD Canadian Children’s Literature Awards or the Governor-General’s Literary Awards – is that they voted for the winners themselves.

Which books make the cut? Adult selection committees drawn from the OLA’s 5,000-plus members in the school- and public-library sectors choose the 10-title shortlists for each of the 12 awards, which include separate categories for French-language books. Two thousand separate institutions enrolled in the program for 2018, including some in provinces beyond Ontario and even some beyond Canada, with students in Vietnam, Trinidad and China all taking part. When the shortlists are announced each October, schools and libraries that want to participate purchase the books.

Naseem Hrab, marketing director at Kids Can Press, which had four nominations across the various shortlists this year, says that the set-up of the Forest of Reading program makes it unique in the Canadian children’s book market. “From a sales perspective, being on the shortlist is really one of the best things that could ever happen to a Canadian children’s author or illustrator because nothing sells as many books as fast or in such a large quantity as the Forest of Reading,” she says.

Or, as festival director Tutching puts it: “The minute you’re nominated on some of the lists, automatically in one day you’ve sold 4,000 copies of your book."

The individual awards have different levels of participation, with Blue Spruce (J.K. to Grade 2) having the highest. In total, more than 250,000 children read the nominated books in 2018, the majority of them in schools.

“Access [to books] is really important,” said Scholastic Canada director of marketing and publicity Denise Anderson, pausing from handing out book-themed swag. Scholastic published seven of this year’s Forest of Reading nominees and recently published a report on how Canadian kids and families read. “The more you put books in front of kids, whether it’s at home or in the schools, is important. And the No. 1 place that was cited as where kids go for recommendations on what to read and for help on what to read was teachers and librarians.”

While the size of the Forest of Reading program and its ability to influence sales is unmatched in Canada, for the authors and illustrators who win, it’s the readers’ choice element that truly sets the awards apart. Participants must read a minimum number of short-listed books – which varies depending on age and reading level – to be eligible to cast their vote. More than 164,000 readers voted in the 2018 Forest of Reading program.

“For most of these kids, this is actually the first time they vote,” said Blue Spruce nominee Andrew Larsen (A Squiggly Story) backstage before the awards ceremony. “It’s important to know that their vote matters and that it makes a difference. They are choosing their favourite book. Hopefully later they will realize that voting is an important part of living.” (Larsen ultimately lost out to Jess Keating and Marta Alvarez Miguens’s Shark Lady.)

Vikki VanSickle has experienced the Festival of Trees from two sides: She is the associate director of marketing and publicity for young readers at Penguin Random House Canada as well as the author of six books for young readers. And this year, she was a winner, taking home the Red Maple Award for The Winnowing in front of those 1,700 sidestepping, hand-waving book fans. “Nothing is quite this crazy in terms of the level of passion,” she said. “Here, kids are encouraged to scream and get excited.”

The excitement continues to the author meet-and-greets, where authors and illustrators routinely spend an hour meeting their readers and signing books. At an adult literary festival, such lineups are the domain of a superstar author visiting from overseas or one publishing their first book in many years, such as Roxane Gay or Michael Ondaatje. At the Festival of Trees, each of the nearly 100 authors and illustrators in attendance is considered a superstar. Though VanSickle had already spent an hour signing books for readers who waited patiently in the rain to meet her, we paused our brief interview twice so she could graciously sign more autographs for eager fans.

Many kids come to the festival with a lifelong love of reading, but Tutching emphasizes that the program’s overall mission is to get all kids excited about books. “I hear all these stories from teachers about ‘I had 40 kids in my school who read all 10 books,’” she said. “But let’s also talk about the kids who never read a book before. Ultimately that’s what our program is about – about getting kids fired up about reading and wanting to read.”

VanSickle has seen the fruits of Tutching’s work from the front lines. “The program might look like a really bookish program but you do have kids – and I had kids in the [signing] line – who are like, ‘You know, I don’t normally read but I read your book and then I tried another,’ and I think that’s really important.”

Backstage before each award ceremony, the nominated authors gather and meet two kids – one who will carry a sign bearing their book cover and the other who has prepared a short speech to announce them onstage. The excitement is palpable as students meet their favourite authors for the first time, and quiz them on matters of plot, character and their plans for what books they’ll write next. The kids are enthusiastic, animated and confident. They are here to meet their heroes.

“For a lot of kids,” Tutching said, “this is their sport.”

Before the middle-grade Red Maple ceremony, Grade 8 student Milena was preparing to introduce Hawk by Jennifer Dance onstage. “Everyone here loves to read,” she said. “And I really like to read so it’s nice to be surrounded by people who enjoy similar things as you do.”

Amelia, in Grade 1, got to hold the sign for Andrew Larsen’s book. What does she think is the best thing about the Festival of Trees? “My favourite thing is that you get to share your feelings.”

To participate in the 2019 Forest of Reading program, visit accessola.org. Registration opens on Oct. 1. Nominated books will be announced Oct. 15.

Becky Toyne is the “Should I Read It?” columnist for Day 6 on CBC Radio and a regular contributor to Globe Books.

White Pine Award (Grades 9 to 12): Everything Beautiful Is Not Ruined by Danielle Younge-Ullman (Razorbill Canada) 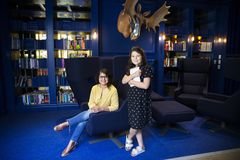 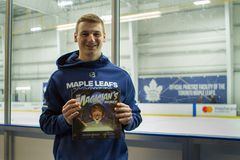