In All Ages, Globe Books asks authors to dig deep for five memorable books that span their lifetime, from childhood to what’s on their reading list right now. Katherine Ashenburg has already distinguished herself for decades as a non-fiction writer and journalist, including as arts and books editor of this paper. This spring, in her 70s, she became a novelist when Knopf Canada published Sofie & Cecilia. Here are her five picks.

Little Women by Louisa May Alcott

The cover of my much-read copy of Little Women has parted company from the rest of the book. The pages are stained and sometimes stuck together, surely with tears in the chapters about Beth March’s illness. On the endpaper, my mother wrote my name (“Kathie Ashenburg”) and my address, and I added in my childish handwriting that my best friend Barbara had given it to me for my seventh birthday in 1952. I don’t know why Barbara’s parents thought that a seven-year-old would want a 546-page novel full of allusions to the Civil War, American Transcendentalism, Pilgrim’s Progress and Dickens, to name only a few of the things that passed right over my head, but it was an inspired choice. I can still feel the rasp of the living room rug on my legs as I lay absorbed in the rivalries, struggles and romances of the March sisters – domestic Meg, scribbling Jo, saintly Beth and selfish, mischievous Amy. I read every word – I was too young to know how to skim – although long stretches must have been incomprehensible. But the vitality of those girls trumped both my ignorance and Alcott’s occasional Protestant sermonizing. Sadly, Jo’s and Amy’s artistic ambitions do not survive marriage and motherhood, and that, too, was part of this book’s influence on me.

Franny and Zooey by J.D. Salinger

Clearly, I had (and have) a weakness for reading about big families. The Glasses in Franny and Zooey are an Irish-Jewish clan with more than their share of theatricality, brains, neurosis and tragedy. How could a teenage girl resist the story of Franny, whose aversion to the phoniness of college life ends in a full-blown nervous breakdown in the family’s New York apartment?

Her brother Zooey tries to talk her back to health with a devastating, pitch-perfect monologue that moves between banter, scolding, affection and a concluding dose of mysticism.

It sounds sentimental, if not treacly, but I reread it long after adolescence and fell instantly under its sway again.

To the Lighthouse by Virginia Woolf

To the Lighthouse was the English major’s reward for having slogged through Middle English poetry and Augustan sermons. At least that’s how I saw it. I could flatter myself that I was enjoying an “experimental,” stream-of-consciousness novel, although it was actually not at all a difficult read . It was yet another story of a big family, anchored by the alluring Mrs. Ramsay, who props up her needy husband, mothers her eight children, frets about the happiness of her houseguests and knits stockings for the poor.

To the Lighthouse is not only an eloquent portrait inspired by Woolf’s mother: death, time and an unconfident artist named Lily Briscoe also play a part. But at the age of 20, I was too infatuated with Mrs. Ramsay to give these other elements the attention they deserved.

Nobody has written a better Canadian novel than Swamp Angel. At least one reason why this is not better known is the old story of location, location, location: Ethel Wilson lived in Vancouver. And in 1947, when she published her first book at the age of 59, Vancouver was very far from the publishing centre of Toronto.

In Swamp Angel’s first chapter – still suspenseful after many rereadings – Maggie Vardoe serves her husband dessert and, while he reads the paper, exits their Vancouver house and their marriage by the back door. What follows her meticulously choreographed escape is an odd, impossible-to-summarize novel. There is no romantic interest, and hardly any conventional plot; Maggie’s sole ambition is to work undisturbed as a cook at a fishing lodge in the British Columbia interior. But the fishing lodge is hemmed in by a shadowy forest, and even the beauty of Maggie’s fly fishing cannot disguise its predatory nature. Threaded through this apparently simple yet endlessly complex story is Wilson’s meditation on the co-existence of compassion and something darker in human nature.

To the Lighthouse by Virginia Woolf

One of the pleasures of writing Sofie & Cecilia was the chance to re-read some of my favourite novels. My heroines find it very hard to talk about their feelings, but under the guise of discussing novels, they reveal quite a lot about their desires, their fears and their disappointments. Re-encountering To the Lighthouse was a revelation that has stayed with me. Mrs. Ramsay was as magnetic as when I met her 50 years ago, but this time, I was more aware of the dubious standard set by this Eternal Feminine figure of selflessness and constant giving. Cecilia calls her influence “pernicious” – a strong word, but one that bears thinking about. It was Woolf’s larger themes – time, death, family, the artistic life – that impressed me on this reading, and especially the lonely, determined painter Lily Briscoe.

‘If there’s a traitor in the White House, this is how it could happen’: James Patterson on collaborating with Bill Clinton on The President is Missing
June 5, 2018 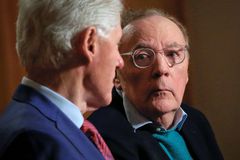 Celebrating poetry in its mass-market moment ahead of 2018 Griffin Prize gala
June 5, 2018 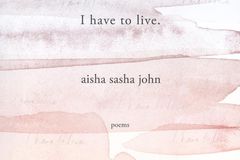 Michael Kaan wins Amazon Canada First Novel Award for The Water Beetles
May 22, 2018
Follow us on Twitter @globebooks Opens in a new window
Report an error
Due to technical reasons, we have temporarily removed commenting from our articles. We hope to have this fixed soon. Thank you for your patience. If you are looking to give feedback on our new site, please send it along to feedback@globeandmail.com. If you want to write a letter to the editor, please forward to letters@globeandmail.com.
Comments