In 2019, speculative fiction filled many of the top spots on the young-adult bestseller lists, continuing a long-time trend – sales of fantasy and science fiction reportedly doubled between 2010 and 2018. Here are some of the year’s most notable:

Kim Liggett’s latest novel, The Grace Year (Wednesday Books, 416 pages, age 14 and up), presents a dystopian future in which existing misogynist attitudes have become more prevalent. At the outset, Liggett acknowledges her debt to Margaret Atwood’s The Handmaid’s Tale, quoting a passage from it as an epigraph: “A rat in a maze is free to go anywhere as long as it stays inside the maze.” This is the central concern of The Grace Year, with its high-spirited heroine Tierney trying to find a measure of freedom in a society that dictates whom she will marry, how she will behave. The year named in the title is one forced on 16-year-old females when they’re sent away for a year to a compound in the wilderness. For reasons that remain mysterious, many never return and others come back broken. It makes for a harrowing read – think Hunger Games meets Lord of the Flies – but, in the text, even those, such as Tierney, who are suppressed and controlled can make certain choices, small and large, that matter.

The Secret Commonwealth (Alfred A. Knopf, 784 pages, age 13 and up) by British writer Philip Pullman is the second book in a newish trilogy, The Book of Dust. The first book, La Belle Sauvage, came out in 2017 and followed the young son of Oxford publicans who protects an abandoned baby, foisted on the nuns who occupy a nearby convent. As a flood threatens Pullman’s fantastical version of England, the boy defends the baby against assorted evils, both supernatural and mundane. The second book centres on that baby who has grown up into an extraordinary young woman, and her quest to be reconciled with her daemon. Long-time readers of Pullman’s – or watchers of the new Netflix series based on some of his earlier work – will know that in his world, a rather steampunk, magic-filled version of our own, his characters all have spirit animals – daemons – tethered to them. To be alienated from one’s own daemon is to be alienated from life, and so hers is a psychological challenge, that plays out on a quest that takes her from England toward the Middle East.

Puffin UK reissued Susan Cooper’s five books known collectively as The Dark is Rising sequence, published originally between 1965 and 1977 (Puffin UK, age 12 and 17). These riff on Arthur’s mist-enshrouded England, with a set of children brought into the struggle to keep the values of the Round Table alive in a Britain tilting toward nastiness and chaos. They have aged well, these five books, with their children echoing those adventurous young people in E. Nesbit and the gentleness of the struggle between good and evil following where C.S. Lewis led.

Stratford, Ont.-based author E.K. Johnston has been on a roll since publishing her first book, The Story of Owen: Dragon Slayer of Trondheim (Holiday House, 304 pages, age 11 and up), in 2014, which was reissued last year. The story has a troubadour telling the tale of herself and her high-school friend Owen, both of them living in a rural Canadian town, beset by dragons. The humour is wry, the dialogue snappy, the commentary on our obsession with fossil fuels sharp – the dragons also love oil and pursue cars, oil fields and refineries, anything that burns lots of the stuff.

Tomi Adeyemi says the success of her book, Children of Blood and Bone, has been a ‘surreal ride’
Subscriber content
December 23, 2019 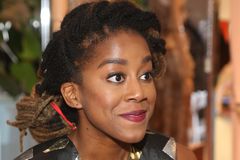