Their open-ended take on human – or animal – behaviour in the context of simple, universal scenarios has helped make Jon Klassen and Matt James two of the most beloved Canadian picture-book author-illustrators working today (both have also illustrated other authors’ books). Toronto-based James’s latest, Nice Try, Charlie!, about an itinerant scrap collector, came out last September. Klassen’s first book since his popular Hat trilogy – the second installment was the first title to win both the Kate Greenaway and Caldecott medals – is the darkly absurdist The Rock from The Sky. Born in Winnipeg and raised in Ontario, he currently lives in Los Angeles. The two authors spoke to Emily Donaldson.

You’re both children’s book authors with young children. How has this year been for you?

Jon Klassen: When I decided to write children’s books, I had this pastoral, monkish vision of what it would be like – but it’s much more social than that. A lot of the time you’re touring and doing talks. This year has been much more like the other thing, where you’re in your house putting out work and don’t get to follow up or do any of the social stuff. It’s hard enough to convince yourself that this stuff matters in a regular year, and then all of a sudden the world’s exploding around you and you’re just trying to find a cover to illustrate your weird bear book [laughs].

Matt James: I had a book that came out, and there was a bunch of related stuff I was really looking forward to that got cancelled. It’s weird to put out a book and not get any feedback. But I have a studio that I can come to, and I like being by myself. And I made art for art’s sake for the first time in a long time.

JK: Yeah, I’ve always needed a contract, or at least an assignment. But for the first time this year, I started getting into making things for myself and just enjoying the fact that they weren’t for reproduction. That never happened before.

MJ: I also became aware of how privileged I was – how lucky I am to have this gig. I was starting to remind myself of my dad coming home from his job, and I thought: Nobody’s making me draw or paint! I work for all these wonderful people who allow me creative freedom. So any kind of box I’m in, I’m putting myself in. That was partly why I started just painting.

How do books typically come to you – or is there even a “typically”?

MJ: I came from a family where my mom would say, “That’d be a good idea for a picture book!” I think my parents thought that if you published a book, you’d be rich [both laugh]. I just walk around trying to catch ideas. Narrative doesn’t come naturally to me, which is why the stories I’ve written are things that I saw, like The Funeral. And then I weave in bits of my own history and stuff I make up along the way, but a lot of the good lines are ripped off from my kids.

So having kids has changed your work...

MJ: It really has. I wanted to write kids’ books from the time I was little, but I wasn’t successful at it until I had kids myself.

JK: Having kids also gives you direct access to when you remembered loving these books for the first time – what you were looking for and how you felt about them. You forget a lot of that. Watching [kids] and the time they take with the page, or where they’re looking in a corner of a story that you aren’t looking at [helps you remember].

Do you read your own books to your kids?

JK: I haven’t been able to. I get weirded out and nervous. Even if it’s just a book I illustrated, it’s too intense. I haven’t had the therapeutic talk with myself about why it’s weird. The older stuff is easier. If I have 10 years on a book, I can read that one much easier than the one that came out last year – that’s too close to the bone.

MJ: It doesn’t bug me with my art, but it does with music. I used to pretty seriously make records, and I find that music really hard to listen to with my kids, especially if I’m singing a song I wrote.

Jon, your new book has a looser narrative than your previous ones. What brought about that shift?

JK: With a picture book, your initial two-page setup has to drive 40 pages of a four-year-old’s attention. That’s a lot to ask, and so with this one I wanted to be dreamier, more impressionistic. And I think it kind of worked. We have an almost-two-year-old, so I’ve been spending a lot of time with board books, which aren’t stories at all – they’re like weird dreams. There’s a different point to those books. They can arc and land, but they don’t land the way a story lands. They land the way a poem lands – where it just feels finished, but you can’t explain why. Picture books can do that too, and I’d be so proud if I keep going that way rather than needing to open the hood on a story and make sure it’s all ticking.

Neither of you resorts to bromides or obvious morals in your books. You also put a lot of trust in kids to make connections.

JK: There’s this one spread in one of your books, Matt, where a kid’s walking home in the dark, and there’s a bear and a moose and a wolf in the woods – but he doesn’t know which one it is. The audience knows all those three animals aren’t there, but there’s nothing to say that they aren’t, and you’re trusting that relationship. That grey area between what is and isn’t happening is so hard to pull off.

MJ: You make it sound like such a smart decision... [laughs] Sometimes just drawing a cool picture is the answer. Go for some visual free-association: I’m gonna draw all three things and see what happens. If you leave some ambiguity, it’s so much more fun. As a kid, you have something to interpret.

JK: When I was first out of college, I wanted everything to have rules. But the older you get, you realize there’s lots of meat in leaving things open-ended – not because you don’t know or are lazy, but because that’s actually the skillful thing to try and engineer, that ambiguity.

Which children’s authors did you love when you were kids?

MJ: I had a pretty mundane kind of picture-book experience, with a few exceptions. I liked Dr. Seuss a lot. I grew up in Woodstock, Ont., and my aunt, who was a teacher in Toronto, would get me Ezra Jack Keats. I had a signed copy of The Snowy Day, but Apt. 3 had the biggest of impact on me because it was kind of scary. It felt like my aunt was complimenting me by giving me a book that was obviously intended for somebody more sophisticated.

JK: The guy I liked a lot was P.D. Eastman. My top one was Sam and the Firefly, which is like a mood piece; the story is sort of secondary. His way of drawing was so unpretentious. There’s nothing in there to impress past what the story wants to do and what he needs to show. It’s almost like he’s sneaking in this weird, surreal experience in what looks like a very normal reader book.

MJ: The reader-book factor was why I loved those when I was a kid. They were the first things I learned to read on my own, and it was this feeling of pride: “I did it!” More than Seuss, [Eastman’s] books have this emotional impact.

JK: Seuss books had this weird harshness to them. I like his books fine, but there was something mean about them sometimes. Eastman is very gentle.

How do you feel about the recent decision to no longer publish some Seuss books?

MJ: I had a bit of a knee-jerk reaction. My first thought was, I better get those books because I don’t have them all, but then I looked at the imagery and thought: Time to move on. There are so many other books. Buy Jon Klassen and Matt James books instead!

JK: Children’s books are tough because people have sacred ideas about what they’re for and who should make them. I can understand a lot of the strong reactions and why the right wing knew it was going to be bombastic to grab onto. It really hits a nerve when you tell people that the libs want to throw out Dr. Seuss.

As far as what you’re supposed to do with problematic books and the rest of the work by the people who made them, I’m out of my depth. But I resent that it’s being used by people insincerely – people who don’t care about kids. They’d be putting money into schools and teachers and libraries if they really thought this stuff was sacred.

What is one thing we can do about children’s learning loss during the pandemic? Put a book in their hands
May 4, 2021

Canadian authors tell us the books that shaped them (and the ones kids should read today)
Subscriber content
May 4, 2021 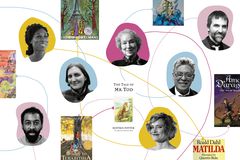 From graphic novels to audiobooks, tips to get kids reading more
May 4, 2021 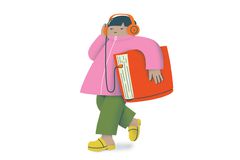 Literacy in the pandemic: We asked kids to tell us about their favourite books
May 4, 2021 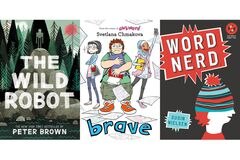