Call me a cookbook author’s worst nightmare. Despite my love of food, my commitment to getting recipes right in my own kitchen lacks, well, commitment.

Take a recent baba ghanoush recipe I turned into “baba ghanoush.” There was an eggplant, which was roasted competently. It went awry from there. The eight cloves of garlic I was supposed to roast alongside the eggplant? Still on the grocery list. One teaspoon paprika? Turned into a few teaspoons cayenne. One-quarter cup plus 2 tablespoons tahini? Try four or five dollops from the largest spoon in the drawer. Pepper? Missing in action. How about Trader Joe’s “South African smoke” seasoning instead? It wasn’t terrible, but let’s just say I did not Instagram this particular creation.

A recent brunch event in Toronto featuring Yotam Ottolenghi helped me to better taste the error of my laissez-faire ways. The acclaimed vegetable-forward Israeli-British chef was in town to promote his latest cookbook Ottolenghi Simple (Appetite by Random House). In it, he begs off a literal interpretation of “simple,” but instead offers six simple-esque recipe categories that better speak to the harried, pantry-poor, often intimidated home cook.

There were not-so-simple wrinkles to this sold-out meal at Fat Pasha restaurant: The visiting celebrity, and a chance to meet and greet and have a book signed, was the main draw. But Ottolenghi himself would not be cooking; rather, the restaurant’s skilled staff had chosen nine dishes from Simple to prepare that day. Indeed, Ottolenghi would arrive shortly after the mezze platter was served. (This arrangement would not prove odd to him. Ottolenghi, who operates six restaurants in London, later tells me, “I mostly eat my own food,” whether or not he made it himself.) I had to wonder: How would a menu of recipes fashioned for amateurs fare in a restaurant setting?

Of course, the food was superb. The luxury here – while being served appetizers of pizza bianca with potato, anchovy and sage; cauliflower and pistachio salad; roasted eggplant with curried yogurt; hot, charred cherry tomatoes with cold yogurt; lima-bean mash with muhammara – was the ability to flip open, in public, the very cookbook that informed these plates.

As much as it may offend a considered palate, there was no need to search your taste memory for what you were eating. Flip to page 66, and I can tell you that the curried yogurt on the roasted eggplant tasted like 1 teaspoon curry powder (in addition to the single teaspoon in the fried onions, a topping I would have sheepishly skipped if I were being lazy), ¼ teaspoon ground turmeric and both zested and juiced lime. I appreciated the finely calculated amounts of ¼ cup sliced almonds and the trio of ½ teaspoon cumin, ½ teaspoon coriander and ¼ cup pomegranate seeds. Later on during the main course, a chopped salad with tahini and za’atar articulated why ¼ cup of tahini provides a much better flavour profile than a barbaric four or five dollops from the largest spoon in the drawer. Cookbook authors often talk about the importance of great photography to their work. Perhaps, in the future, someone will invent 5-D technology so we may also exactingly sample what we see on the page.

There were still clear indicators that these professionals had elevated Ottolenghi’s creations in a way few home cooks can. In particular, I sighed heavily at the crisped edges of the harissa and confit garlic roasted potatoes, and the beef sirloin and basil salad, where the meat was seared to a perfect rare – rare feats in a condo kitchen where the overly sensitive smoke detector sends the dog skittering upstairs.

During brunch, I tell Ottolenghi about my frustrated culinary history. How could I ever reproduce what I just ate here? He diagnosed my problem immediately: “Are you following the recipe?” 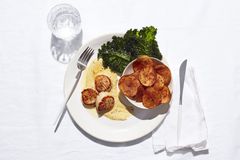 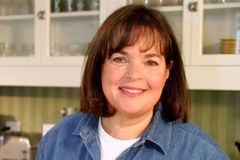