As independent book stores across Canada have been forced to temporarily shut their doors, a Seattle-based company is offering readers a way to get their audio-book fix while still supporting their go-to local shops.

Libro.fm is an audio-book seller and subscription program that functions almost identically to Amazon’s Audible: for $14.99 a month, you get one audio book, with discounts on additional books and other perks. The main distinction is that Libro.fm partners with independent book sellers across North America and splits the profit of each monthly subscription fee with your store of choice.

“Audio books, for many years have been the fastest growing category in publishing,” Libro.fm co-founder Mark Pearson said in a recent phone interview. “But independent book stores were getting left behind in the audio-book revolution.”

The pillars his company has been built on over its seven years – community, curation and convenience – “matter more than ever,” he said, during a global pandemic.

“Book stores are not good at social distancing. Amazon was built for it,” Pearson said, noting that book stores’ reliance on community is a disadvantage at a time when folks are largely staying at home.

Libro.fm boasts a catalogue of 150,000 titles. Although that can’t compare with Audible’s vast library – claimed as the world’s largest – it does include virtually all of the new big books. The vast majority of their 1,000-plus partner book stores are American. But as of Tuesday, according to the company’s website, 78 Canadian book stores had signed on.

Dave Kuruc, co-owner of King West Books in Hamilton, Ont., joined roughly two weeks ago, as it started to become clear that bricks-and-mortar stores like his were likely to be shuttered for some time. He is still doing doorstop deliveries of books around town, but said the Libro.fm partnership “just gives us one more way to connect with people.”

In the first week, he said, the pickup for Libro.fm was minimal. But after he put posters in his shop windows and advertised the service on social media, he saw the numbers jump.

“They have a great program about being able to switch over [from Audible] as well,” he said. (According to the Libro.fm website, members switching over are rewarded with three books for the price of one.)

Kuruc says he believes audio books can be particularly welcome company during these lonesome times.

“I was just talking to a customer about [the joy of] being read to,” he said. “And we still read as a family. So if you don’t have that in your life, audio books can bring that to you. The idea of sitting and listening to someone orate is amazing.”

In mid-March, when the effects that the pandemic would have on small businesses started to become clear, Libro.fm launched a campaign to give 100 per cent of each monthly subscription fee to their partner bookstores for the remainder of the month.

“We need [these stores] to survive and thrive,” Pearson said.

Peter Garden, who owns Turning the Tide Bookstore in Saskatoon, has been a Libro.fm partner since the fall and says audio books have become a staple in his own home.

“I really got turned onto audio books because both of my kids have dyslexia. My oldest daughter is a voracious consumer now of audio books since she realized she could read books [that way]. She goes through like three or four every week,” he said, adding she’s dubbed it “ear reading.”

Garden said he has picked up new Libro.fm subscribers over the past few weeks, and has launched a social-media campaign to promote it further. He hopes it will help their shop to make it through this period.

“So far it’s okay, but that stress is still there. You know, is this just going to fall off tomorrow? What the heck am I going to do?” he said. “But having the audio-book option, and having that as another stream of revenue, puts my mind at ease a bit.”

Ian Brown listens in: Why audiobooks are back in a big way, thanks to the storyteller
July 15, 2019 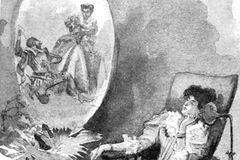