In 1992, Margaret Atwood, her partner, Graeme Gibson, and their daughter spent about a year living in Provence. That time is the inspiration for Atwood’s newest short story. In Two Scorched Men, the narrator and her partner, Tig, meet two eccentric men who fought in the Second World War – John, in the Royal Navy; and François, in the French resistance. A few years later, the narrator receives an e-mail from François with a manuscript attached; he had written a novella.

“Why had he sent this booklet to Tig and me, of all people? Or rather to me, since Tig did not read French. What was I supposed to do with it?” the narrator wonders.

The story is being published Aug. 4 on Scribd – as a Scribd Originals e-book and audiobook.

Atwood spoke with The Globe and Mail’s Marsha Lederman from her home in Toronto.

How do you know when a story is a short story or a novella or a novel? How do you decide that?

Oh, you kind of know. Did you ever sew, Marsha? Well, I sewed a lot in the 50s because it made my allowance go further and the money that I was earning and putting into my little bank account. So you could go to the fabric store and go to the remnants pile. And these were leftover pieces of fabric that you could get [at a discount]. So you got a remnant because you fancied it and then you looked at how big it was and then you calculated what you could make out of it. So it’s like that: How big is the piece? What can you make of it? If it’s longer – are you going to be stretching it out too much? If it’s shorter, are you going to be wasting a lot of fabric? And if it’s longer and the remnant isn’t big enough, then you have to piece in other things and it’s obvious they don’t really fit.

I understand this story is semi-autobiographical.

There’s nothing in it that isn’t true.

Can you tell me about your time in Provence? What took you there?

It went like this: Graeme and I said, we were going to take a year away and write. So because we had made that decision, we said to our daughter who was 14, 15: We have decided to take a year away, but you get to choose the country. And we thought she would say Australia or England where she had pals in both places, but she didn’t say that. She said I want to go to France, I want to go to a small location where nobody speaks English and I want to become fluently bilingual. So we thought that was pretty daring. We then said we have decided to take the year away, she has chosen the country, Graeme you may choose the region of the country. And he said I would like it to be in the south because I don’t want to have to shovel any snow.

There’s a scene where you describe the walk from the house Tig and the narrator have rented into the nearby village. It’s so full of detail. Did you remember that? Or did you look at photos?

I remembered it. I’m cursed with an unpleasantly exact memory. I shouldn’t say cursed; I should say blessed. I do have quite a good memory, still.

So John and François were based on real people?

Yes, their names were John and François.

And you were the narrator?

A me-like sort of character; that’s probably the fictional part.

The last scene, which I don’t want to spoil for anyone who reads this, that really happened?

Did John and François want you to tell their stories, as the narrator says in the story?

Why else would they have told me? You sit down with a stranger and they tell you something about themselves. They’re passing something along.

I don’t know when exactly you wrote this, but what was it that made you finally write this story down?

[Scribd editor and content consultant and strategist] Amy Grace Loyd bugged me. “Margaret, I really need you to write a story.”

There’s a line in the story about John and François. But when I read it, I couldn’t help but think about your own circumstances in the past couple of years. “They’re dead now. A thing that happens increasingly: People die.”

You may have noticed that.

But it’s very personal for you.

I’m in the age group. So you look at your high-school class, how many of them are still alive? You look at your graduating class at university: how many of them are still alive? And I think back to for instance 1963 when I was in England with a couple of my pals; they’re dead. Just a lot of people that I’ve known are dead, by now. You know what they say, Marsha? Make younger friends.

Is that part of why you felt compelled, the Scribd plea aside, to tell this story, as the last member of this group of four who is still alive?

I had this novel [from] François for some time. He did really send it to me; it’s in my office right now. And the quotes from it are real. But it’s a very curious piece of writing and I don’t really know what to do with it. But he sent it to me for a reason.

Can I ask how you’re doing? You’re dealing with your own personal loss, there’s been a pandemic. It’s a hard time.

Yes and no. A lot of people are having a much worse time. You’re thinking of Graeme dying. It was not unexpected. He was 86. He had vascular dementia. He was fully determined to exit the scene while he was still him. As it turned out, he didn’t have to do that. But people in the family thought we don’t have a year. And he thought that, too. So we all knew; it was just a matter of exactly the timing.

Have you been able to write through the pandemic?

Scribd is hosting Margaret Atwood for a virtual event on August 10. 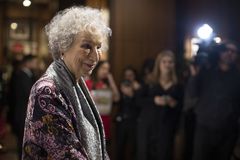