Michael Nicoll Yahgulanaas proposes that you buy two copies of his new book, Carpe Fin: A Haida Manga. He has a project in mind for the reader, just as he did when he published his previous hand-painted graphic novel, the award-winning and bestselling Red: A Haida Manga. This buy-two-books idea is not a money-making scheme by an ambitious author. His ambition is of a higher order: Getting people to engage with the world – and perhaps save it.

Carpe Fin: A Haida Manga is billed as a prequel to Red, telling the story of Carpe, a newly unemployed carpenter who returns home to find the village hurting: A fuel spill has ravaged the fish population, and food supplies are dwindling; climate change is creating environmental chaos. A small group takes a canoe out to hunt for sea lions, and Carpe, who has engineered a deadly and efficient sea-mammal-killing machine, joins the expedition. But a vicious storm kicks up, and Carpe is marooned on an isolated rock at sea as the others flee to safety.

“I wanted to deal with the notion: What happens when we get so ‘efficient’ that we actually end up abandoning ourselves on a reef?” Yahgulanaas said during a recent interview.

As with Red, Carpe Fin was developed simultaneously as a mural and a book. Yahgulanaas designs the mural so it can be sliced into pages. He starts with a small sketch, scans it and enlarges it, then creates a grid to map out the pages.

“There’s a lot of hiccups with the process,” he said. “There’s lots of steps in between just because trying to connect the macro and the micro at the same time is really [complicated], and I still haven’t quite figured it out.”

The book was published in September. The mural, commissioned by the Seattle Art Museum, was installed Oct. 31. It is a monumental watercolour and ink work, six metres long and two metres high.

This is where Yahgulanaas’s buy-two-books proposal comes in: He invites readers to buy them and cut up the pages to make their own mural, to tell the story in a different way.

“Don’t follow my sequence. See if you can discover something else in it. Become that artist,” he said.

He made the same suggestion for Red. “I welcome you to destroy this book,” he wrote at the end of the work.

“The importance of hybridity in Haida manga is to give people peeps through windows and make doorways through walls so they can see an emotive linkage to who we are as the [so-called] ‘other,’” Yahgulanaas said. “And they can’t do that if it’s so ritualized and formalized and structured or driven like some recipe.”

He believes the audience is essential – is everything – when it comes to a work of art.

“The magic isn’t in the object. The magic is in the invisible space. It’s in that space between the observer and the object. And so every time I do a piece, I just want to imagine perhaps that somebody is going to feel some emotive response and they’re going to do something, they’re going to be engaged. They’re not going to waste oxygen. That’s the worst thing we can do – is just sort of be casual and cast away our lives.”

At 65, Yahgulanaas remains extremely busy and in demand, with projects planned for Berlin and Ukraine. He also has two more book/mural projects in mind – a third dealing with contact and a fourth with the Asian-Haida connection that has been so central in his work and life.

The Flight of the Hummingbird, a 45-minute work co-commissioned and co-produced by Vancouver Opera and Pacific Opera Victoria, is his first opera.

Even more directly than Carpe Fin, the opera deals with the destruction of the environment and the impact on nature and animals – a hummingbird, rabbit, beaver, owl and two crows are characters. The work is aimed at young audiences and will embark on a school tour in the new year before public performances at the Vancouver Opera Festival in the spring. At the November workshop – a private event for donors and other supporters – the company announced that more than 90 performances had already been booked. That’s a lot of young people hearing this crucial message.

“We are in crisis. What can we do?” one of the characters in Carpe Fin asks amid the environmental mayhem drawn so beautifully and harrowingly in the book.

“I’ll do what I can,” the Hummingbird concludes toward the end of the opera, as if to answer this essential question across works and genres. “We will do what we can.” 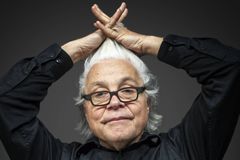 Review: The Little Hummingbird, by Michael Nicholl Yahgulanaas
April 28, 2018
Follow Marsha Lederman on Twitter @marshalederman
Report an error Editorial code of conduct
Due to technical reasons, we have temporarily removed commenting from our articles. We hope to have this fixed soon. Thank you for your patience. If you are looking to give feedback on our new site, please send it along to feedback@globeandmail.com. If you want to write a letter to the editor, please forward to letters@globeandmail.com.
Comments