We crime fans love our writers. We read their works in binges, wait eagerly for the next installment of favorites, and, when a series ends, genuinely mourn. Who do I read next? That’s a question I get all the time, and I pondered it long when Philip Kerr died in March. His Bernie Gunther series was one of my personal favorites, and I loved both the much-reviled The Grid and the much-applauded A Philosophical Investigation.

But Kerr is gone – where do I go from here? I went to the most recent on the shelves for successors to the late lamented. Here’s a fast selection, not perfect, but a start.

The first thing one notices about Kerr’s novels, primarily set during the First World War and the Second World War, is their incredible depth of historical research. Every detail – from the posters on the walls, to the dresses on women – builds the atmosphere of his stories. That said, a modern slang interruption can kill the best built character.

David Downing is a meticulous researcher of the period and his John Russell series follows a similar trajectory to the early Gunther books, moving from Berlin in 1933 to Moscow in 1945. Each book is titled for a Berlin train station. My personal favorite of the older series is Potsdam Station, where Jack rides into Berlin in 1945 at the head of a Red Army tank column. You can read the series in order (my preference), or dip into any year for a brilliant plot playing Stalin against Hitler against Roosevelt against Churchill.

Downing’s more recent Jack McColl series is set during the Great War. In The Dark Clouds Shining, (Soho, 384 pages, $33.95) McColl, former military intelligence and British spy, has just been released from jail and is headed to Moscow where he’ll be reunited (maybe) with his lost love, an American communist. As with Kerr, Downing is good with female characters.

A joy of reading both Downing and Kerr is being transported back to a place and time. I certainly wouldn’t want to ride in a Russian tank today, but in a fantasy I might, and that’s the world that Frank Tallis takes me to in his Liebermann Papers series featuring Inspector Max Liebermann, friend and confidante of Sigmund Freud and member of Emperor Franz Ferdinand’s finest police force. It’s 1904 in Mephisto Waltz (Pegasus, 384 pages, $34.95), the seventh story in the series, and Liebermann has a dead body on his hands. The man, or what’s left of him, is found tied to a chair in a piano factory. He has been shot and his face destroyed by acid. The only clues are the three chairs placed in front of him. Trial and execution?

As with Kerr, Tallis is great at creating a slow buildup of suspense and atmosphere. As we drift into the world of the waltz, we become more attuned to the creaks and groans beneath the polished Viennese surface. There are reasons why a legendary anarchist would choose Austria-Hungary for a demonstration and Tallis takes full advantage of the complex political undercurrents to build his plots.

Should you need even historical atmosphere, consider Volker Kutscher’s Gereon Rath series. The five (so far) novels follow Rath, a young policeman from Cologne, as he is introduced to the Berlin vice squad and murders that cover class, caste and politics. The translation from the original German is a bit clunky, but the first in the series, Babylon Berlin (Picador, 432 pages, $22.50 paper), is worth a try. If you’re looking for more immediate Weimar glory, the Netflix series based on Kutscher’s stories – now filming its third season – - is actually better than the books.

Just where would Bernie have been without Vera, his love interest? Jack Russell has his one and only woman too, but Gereon Rath has several and they’re all worth knowing with great backstories. That said, for those looking for a female protagonist sleuthing in the war years should pick up Jacqueline Winspear’s Maisie Dobbs books. Fans know that Maisie, private investigator and psychologist, began her career in 1918 on the Western Front. To Die But Once, the 14th book in the series, takes us to the eve of Dunkirk as all of Britain awaits the fate of the Allied Expeditionary Force and faces the possibility of German invasion.

Winspear’s recreation of the period isn’t as cynical as Kerr’s, or as colorful as Kutscher’s, but Maisie is no cellophane heroine. While everyone is preparing for the worst, she’s following the trail of an apprentice painter, who was mysteriously attacked while working on airfield hangars for the government. We know he’s been attacked but why? Along with the old Dunkirk spirit, Winspear’s story points to the money to be made by war profiteers. It wasn’t all Churchill’s speeches and fancy parades.

And what of Canadian war-era crime reads? There was no shortage of drama on the home front as William Lyon Mackenzie King danced between Quebec’s refusal to conscript and Ontario’s demands for all out war. No one has written that novel yet, although Maureen Jennings has dipped a toe in the pond with her Tom Tyler books. We do, however, have Canada’s role in the real life theft of atomic secrets in 1946. In Last Night of the World (Mosaic, 248 pages, $24.95 paper) Joyce Wayne mines this excellent plotline. A journalist and former editor at Quill & Quire magazine, Wayne has the added advantage of having been a “red Diaper baby” – her father was a committed member of the Communist Party of Canada with his own tales of the Igor Gouzenko affair. The novel also features a solid female character: Soviet agent Freda Linton is tasked with getting information out of Canada’s atomic base at Chalk River, Ont.

We know that Freda didn’t succeed, but she came close, and that makes this story, drenched in true Canadian history, a real page-turner. Wayne reminds us of a time when the Communist Party was legal, and when “workers of the world unite” was more than a slogan. And Kerr, who explored the nuances of communist life in Dead Meat would have seen the irony in communists in Ottawa. Read it for the mystery, and learn a bit of history on the side.

Getting historical with author C.C. Humphreys' most memorable books
July 24, 2018 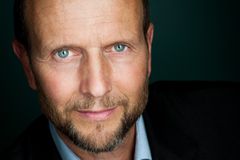 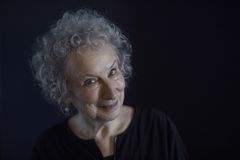 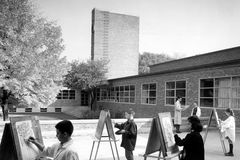