A publisher has pulled a book of poems about missing and murdered Indigenous women from its collection following criticism that the author did not request the family’s permission to write about their loved one’s death in graphic detail.

Inuk writer and activist Delilah Saunders wrote in the Nova Scotia Advocate last month that she was “was disturbed and very upset” by the imagery in Shannon Webb-Campbell’s “Who Took My Sister?”

One poem in the collection describes the 2014 Halifax murder of Saunders’ sister Loretta Saunders, who was writing a thesis on missing and murdered Indigenous women at the time of her death.

Saunders wrote that Webb-Campbell did not reach out to the family for permission to write about Loretta’s death.

“I’m unsure if she consciously decided to not reach out to my family because she knew no family would agree to having their loved one written about in such gory detail, or if she is just that out of touch with the protocols that exist in our Indigenous communities,” Saunders wrote in the Advocate.

“Yes, Loretta’s death was very public and my family has been incredibly open about her work, life, death and our grief,” Saunders wrote in a Facebook post on Thursday. “But our issue is with Webb-Campbell claiming to be honouring my sister with a very disturbing poem that we did not approve of.”

Book*hug publishers Jay & Hazel Millar issued a statement on March 30, saying they were unaware that Webb-Campbell had not contacted the families of the women written about in “Who Took My Sister?,” and announcing that the book had been removed from public sale, distribution, and promotion.

The publishers said all revenue from sales of the book would be donated to the Loretta Saunders Scholarship Fund.

In an e-mail to The Canadian Press on Friday, Jay Millar wrote that “we have decided to dedicate our time and energy to speaking with families who were hurt by the publication of the book and to learn from this moment, from which there is no quick or easy answer.”

Saunders and Webb-Campbell did not respond to interview requests.

Webb-Campbell’s appearance at an April 26 event with author Lee Maracle at the Ottawa Writers’ Festival was also cancelled following the controversy. 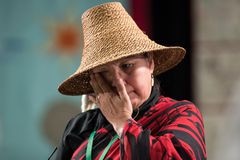 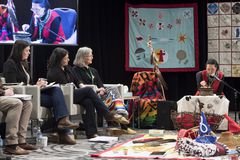 Daughter of murdered Indigenous woman tells inquiry she fears becoming a statistic
March 8, 2018
Report an error
Due to technical reasons, we have temporarily removed commenting from our articles. We hope to have this fixed soon. Thank you for your patience. If you are looking to give feedback on our new site, please send it along to feedback@globeandmail.com. If you want to write a letter to the editor, please forward to letters@globeandmail.com.
Comments are closed