Growing up, Philip William Stover’s search for romance novels was shrouded in ritualistic secrecy. As he’d pass the romance shelves at his local bookstore he would try to discreetly look at the books he was interested in. “I think these are the ones my sister wanted?” he’d tell the cashier. But at home, he’d rip the covers off, file them systematically, then hide the interior pages inside a novelization of Return of the Jedi while he read. Today, he has graduated from closet reader to confident writer as the author of the male-male love story The Hideaway Inn. Stover weaved his own experience with homophobia and gender policing into the story of his protagonist, Vince, to the extent that he almost forgot to fictionalize the names of his childhood bullies. When his editor questioned whether the bullies in the book would be able to tell that the young Vince was wearing pressed powder makeup, Stover responded, “They certainly did when I was wearing it.” (They compromised on blush.) While Vince must overcome past demons before true love can blossom, the dynamic of a male-male relationship allows for a different type of happily ever after. “They both learn something from the other, which is good romance,” Stover says. “Because they’re two men, there’s this equality about them in the story.”

The Girl Next Door by Chelsea M. Cameron

Chelsea M. Cameron was writing romance novels that were cracking The New York Times Bestseller list (2012’s college bad-boy story My Favorite Mistake) when a personal revelation about her sexuality in 2015 changed everything. After coming out as queer, Cameron describes the experience of writing a male-female romance as “pulling teeth.” By contrast, writing her first female-female love story (the 2016 high-school cheerleader story Style) just came naturally. “I know I can make more money and be more mainstream with non-queer books,” she says. “But I physically cannot write those books anymore. The decision was kind of made for me.” Listening to her inner voice led her to Carina Adores. The Girl Next Door follows Iris as she moves back in with her parents in their small Maine town while she weathers a quarter-life crisis. She finds her curiosity piqued by a lobster fisher, a woman with muscular forearms who lives next door. “Some of the people that I used to be friends with when we were all writing the same thing have gone by the wayside,” Cameron says. “But I’ve got new authors that I am friends with in a different community.

“Even though it is smaller, the readers are so happy to have those books. I get messages from people all over the world who say thank you, I love this book and have read it five or six times. The books just mean more to the readers.”

After getting her English literature degree, Elia Winters decompressed by reading a lot of “terribly written” erotica online. “I was looking for the female gaze in stories,” she says. “I care less about people’s genders and more about the perspective. When a character is giving a first-person account and they’re like, ‘these are my 36 DD breasts and look at my slender hips,’ it’s like, this was written by a straight guy.”

Her polyamorous novel Three-Way Split won the romance genre’s highest honour, the RITA, last year for Best Erotic Romance. It allowed her to explore a bisexual relationship, but her Carina Adores book, Hairpin Curves, is her first female-female romance. The cozy road-trip adventure, to be published July 28, about estranged friends grappling with their unresolved tensions, gave Winters an opportunity to explore a more nuanced portrayal of bisexuality. “There is often pressure when writing bi characters for them to like all genders equally, or they always knew this about themselves,” she says. “As someone who didn’t figure this out about myself into well into my 20s, it’s important to me to show that there are different ways to understand your own identity and that often those change over time.”

Eva Holland delves into our relationship with fear and how it can help us deal with the COVID-19 pandemic
May 31, 2020 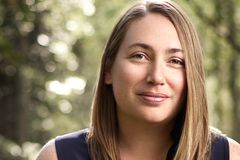 You Suck, Sir: Podcaster Paul Bae’s new book looks back at his teaching days
May 29, 2020 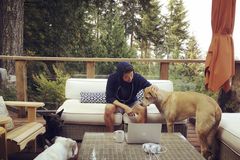