In the fall of 1962, Tom Wolfe picked up a copy of Esquire and flipped to a story about former heavyweight champ Joe Louis. Penned by writer Gay Talese, it was no ordinary profile of an aging sportsman. It was peppered with snatches of dialogue between Louis and his wife, punctuated with onomatopoeiac “Mmmmmmmm”s. It read in places like a short story, like honest-to-god literature. Recalling this auspicious literary encounter years later, Wolfe remembers wondering, simply, “What the hell is going on?”

Talese’s story effectively lit the spark of a new form of literary non-fiction spearedheaded by Wolfe, who passed away today in New York at the age of 88. A graduate of a private liberal arts school and an aspiring professional pitcher (his baseball career hamstrung by his inability to nail fastballs), Wolfe took a job as a workaday reporter at The Washington Post in 1959, where he won awards for humour writing and foreign reporting. In 1963, shortly after his encounter with Talese’s inventive profile, Wolfe was commissioned with his own meaty Esquire feature, about California’s underground custom car culture.

Frustrated with his inability to write a Talese-level magazine feature, Wolfe sent his scattershot notes to his editor, who published them intact. The “finished” article was called, There Goes (Varoom! Varoom!) That Kandy-Kolored Tangerine-Flake Streamline Baby. It was Wolfe’s first stab at his new kind of journalism, which he’d go on to term “New Journalism” − a designation which, lamentably, lacks much of the imaginative whizz! bang! varoom! kapow! free-associating sound-effects verbiage that studs Wolfe’s early work.

Throughout a lengthy career, Wolfe would turn out several notable collections of New Journalism, including: The Pump House Gang; The Electric Kool-Aid Acid Test; Radical Chic & Mau-Mauing the Flak Catchers; Mauve Gloves & Madmen, Clutter & Vine. His elevation of journalism to literature, perhaps naturally, resulted in several novels, including the WASPy Manhattan social satire The Bonfire of the Vanities and the more curious late-period campus novel I Am Charlotte Simmons. There was also The Right Stuff, his exhaustively researched account of the early U.S. space program that shed the more show-offy stylistic tics of his earlier work.

A better name might have been “Non-Journalism.” This is not meant, necessarily, as a knock. Rather, it suggests the aim of Wolfe and his contemporaries – among them, Joan Didion, Norman Mailer, George Plimpton, Hunter S. Thompson – was to undermine the conventional matter-of-fact dispassion of journalistic practice. Subjects were treated like characters in novels: living, three-dimensional people, presented to the reader with warts-and-all realness. The “facts” − all the standard who, what, where, when, why, how bric-a-brac − were often subsumed (or fudged) in the service of grander, more poetic truth. Wolfe called the process a “social autopsy.” The New Journalists were madcap surgeons, and America was their cadaver. It’s a fitting analogy. When the New Journalism took hold in the 1960s, the American project seemed like a total stiff.

The aim of Wolfe and his contemporaries – among them, Joan Didion, Norman Mailer, George Plimpton, Hunter S. Thompson – was to undermine the conventional matter-of-fact dispassion of journalistic practice.

Plasticized postwar complacency was being ruptured in the 1960s by folkies, longhairs, Civil Rights activists, anti-war protesters and other agitators. The New Journalists, naturally, embedded themselves in these scenes. (See: Didion’s Slouching Towards Bethlehem, Thompson’s Hell’s Angels and Wolfe’s own acid-head document The Electric Kool-Aid Acid Test.) The countercultural project for a new America demanded not only a new perspective, but a new language, liberated not only from the shackles of journalistic tradition, but the rigours of grammar and syntax itself. Describing what one imagines to be the commonplace countercultural activity of marijuana smoking in Acid Test, Wolfe writes, “A few joints are circulating around, saliva-liva-liva-liva-liva.” Their writing was like be-bop, or jazz, or a wailing Hendrix solo, or a meandering Grateful Dead jam.

That much of this stuff reads as hopelessly dated speaks to its social-cultural particularity. Where one can eternally return to George Eliot, or Jane Austen, or Somerset Maugham, and find universal truths rendered in what passes as plain English, much of the New Journalism feels as out-of-time as a stoner in pilled army fatigues brandishing a “Dump Nixon” placard. (This cartoonishly anachronistic quality was physically embodied by Wolfe himself, who made a point of sporting crisp white suits, no matter the occasion or the weather.)

This is no fault of the work itself. But where the New Journalism and its subsequent generations of slavish acolytes and copycats failed was in taking up a timely trend as a literary project of (in the Trotskyite parlance) permanent revolution. The New Journalism spanned legions of imitators and copycats who – to paraphrase author and journalist Dan Wakefield – swapped journalism’s “impersonal eye” for the “personal I,” and whose indulgent, look-at-me, mock-immersive ramblings clog weekend magazines and broad swaths of the blogosphere, where nominal talents feel perversely compelled to catalog every half-cooked thought. In an online economy that demanded freshly cranked-out content, such pale, unworthy New Journo 3.0 mimics proliferated.

The best New Journalism fused subjectivity and objectivity in service of that deeper truth. It knew that truth wasn’t only the 5Ws, Intro to Reporting 101 stuff, but the truth of peoples’ characters, their interior lives and of shifting, mutating cultural milieus. The contemporary personal essays and think pieces tend to compensate for a lack of objectivity with an overinjection of personality. In 2017, The New Yorker’s Jia Tolentino pronounced the death of the “personal-essay boom,” citing shifts in the web’s precarious economics and rising vitriol against the form as she dissected yet another swollen cadaver. Perhaps the passing of Wolfe − who all but invented, and helped perfect, the literary prospect of injecting oneself into a piece of reportage − is the last nail in the coffin, a symbolic marker of the death of the “I.”

Or perhaps the legacy of Wolfe and his cohorts offers a buoying lesson: for aspiring and established writers alike to keep radicalizing the form, to use imitation as a byway into genuine innovation and not an end in itself. Many forms stagnate, or self-immolate, or wither and die on the vine. The ambition of anyone looking to inhabit Wolfe’s witty, caustic, deeply perceptive white-on-white livery is to commit to a project of sustained revolution, to lure the ever-wearying reader into wondering, exactly, “What the hell is going on?” 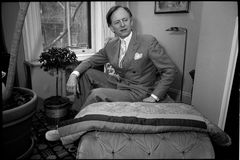