One meets Lee Maracle, the great Canadian Indigenous writer, teacher and activist, with some trepidation. She’s a big-brained thinker known to deal with fools in the same way a fly swatter deals with insects. Once, at a public meeting on missing and murdered Indigenous women, a man asked her what the word reconciliation meant to her. “Well,” she replied, “stop killing us would be a great place to begin.”

She works at First Nations House at the University of Toronto on the third floor of a building constructed 110 years ago. No elevators. “Let’s go to my office,” Maracle says in greeting me. “There’s air conditioning.”

There she says something about asbestos: “We’re sick from this building.” I suggest to her that perhaps it’s a metaphor. “For what, neglect?” she replies. “Suffering,” I offer. “Nah, I’m not into that,” she says. “Leave that to the priests.”

Then she laughs that famously hearty laugh of hers. It’s a hug, really.

And maybe the 69-year-old Maracle, who is only recently making enough money from writing that she can afford to quit her​ $1,000-a-month part-time gig as a mentor and instructor at the University of Toronto, is getting the last laugh these days.

Last year she was named an officer of the Order of Canada. And the author of more than a dozen books has just been shortlisted for the 2020 Neustadt International Prize for Literature, a US$50,000 award organized biennially by the University of Oklahoma and its magazine World Literature Today. It’s a significant prize, dubbed the “American Nobel,” because a large number of Neustadt winners and nominees have later gone on to snag the big one from the Swedes.

Maracle arrived on the Canadian literary scene in 1975 with the release of Bobbi Lee Indian Rebel, an autobiographical exploration of post-colonial tensions and the sexism and racism facing Indigenous women in Canada. After all these years, she might be on the fast track to the Nobel. “I can wait,” she says. “Besides, I don’t know if I write for awards so much as for what I want changed.”

Here’s the deal, though: One of the things she wants changed is having more Canadian Indigenous women winning literary prizes, particularly in this country. Maracle says the Canadian publishing industry has traditionally lagged its American counterpart in terms of recognizing its Indigenous writers. Although, things have improved, she believes, since the Truth and Reconciliation Commission of Canada issued its report and calls to action in the summer of 2015. “Everybody started looking for winners,” she says, "someone to nominate.”

Although the Neustadt is a lifetime-achievement honour, Maracle’s latest novel (Celia’s Song) is specifically cited as the representative text that earned her the nomination. The book is a hopeful multi-generational tale about the indignities suffered by First Nations people and the story of one Nuu’Chahlnuth family’s crises of suicide, alcoholism and sexual abuse. The book was published in 2014, after one publisher sat on it for two years before telling Maracle that it was “too ethnic.” Maracle then took it to Cormorant Books, where publisher Marc Côté suggested the book might not be ethnic enough.

After a gruelling rewrite process, Cormorant published what Maracle believes to be her “best book.” Although warmly reviewed, Celia’s Song won no awards. “I was shocked,” says Maracle.

She doesn’t shock easily. Maracle, a member of the Sto:lo Nation who grew up in a poor neighbourhood in North Vancouver, is a persister. In 1988, she asked to launch her I Am Woman: A Native Perspective on Sociology and Feminism at the Vancouver Writers Festival, but was denied an invitation. She attended anyway and audaciously jumped on stage to read. “The festival officials were horrified," she recalls. "And while I’m not going to say someone got fired, leadership changed and Indigenous writers began getting invitations to the festival.”

A mother of four (and grandmother to a quartet more), Maracle’s latest work is Hope Matters, a collection of poetry written with daughters Columpa Bobb and Tania Carter. She wants more CanLit recognition paid to female Indigenous writers. Some of the younger ones she adores – including Métis writer Katherena Vermette, who nominated Maracle for the Neustadt – no doubt have dog-eared copies of the author’s Bobbi Lee on their bookshelves.

She asserts that the industry is still dominated by white males, but that there’s now definitely room at the table for others. “Which is all I ever asked for," she says. “Don’t take my place, if you’re not going to set another chair.”

And she’s not laughing. 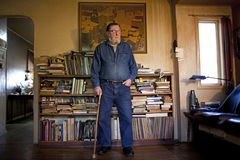