After the Soviet Union collapsed in 1991, moving a centrally planned economy into the hands of self-interested oligarchs ripped the social fabric of Russian society asunder. In Kremlin Winter, Robert Service puts Russia’s chaotic transition to capitalism as bluntly as possible. “Russians [had become] perennial losers and what Russia [experienced] was not just a post-imperial syndrome but also a post-superpower syndrome.”

Service is a seasoned Russophile with four decades of experience writing about modern Russian history. That wealth of knowledge and expertise is an invaluable asset when the historian explores the complex crisis of identity that surfaced following the demise of Soviet Communism.

The fundamental problem was a nation-state mythology. Russia no longer had one. Territorial downsizing added to Russia’s growing global humiliation. Fourteen post-Soviet states declared independence from their former Moscow overlords, while Central and Eastern Europe looked toward NATO and the EU. Russia suddenly became little brother to the United States, which began dictating a Western-driven global political agenda with patronizing authority.

Service then turns his attention toward the book’s central focus: deconstructing Putinism.

The historian believes it works off three main ideas: standing in stark opposition to Western liberalism; winning back the territories and political influence Russia lost when the Cold War ended; and maintaining a delicate balancing act between authoritarianism and patriotic social conservatism.

But Russia is not a totalitarian state, Service stresses. Putin understands that if Russia wants to have global appeal it must continue to have a dynamic cosmopolitan society and a flourishing modern culture. This means extending some freedom, but not an unlimited amount.

So Russia is not China. But it’s hardly a flourishing democracy. Vladimir Putin typically labels dissenters of the Russian state as backstabbing traitors. Most have ended up in prison, in exile or dead. These secret state assassinations have predominantly taken place in Britain, a favourite milieu for Russian oligarchs laundering dodgy cash. Service began writing this book after he stood as a witness to the Litvinenko public inquiry in 2015-16. In it, Sir Robert Owen concluded that Putin had “probably” been responsible for ordering the murder of Alexander Litvinenko, the former officer of Russia’s Federal Security Service (FSB) who was clandestinely working for the British foreign intelligence services (MI6) when he died by lethal poisoning.

Service spends considerable time looking through Putin’s CV. His working career has mostly been spent in the intelligence services: first as a KBG officer and then later as director of the post-Soviet FSB.

Before becoming President of Russia in 1999, Putin had not once stood for election at any level.

But Slavic subtlety and strongman charm have always been central components of the Putin appeal. So, too, has Putin’s political promise. It’s largely remained unchanged over the last two decades: Give me paternalistic power and unquestionable loyalty and I will improve the economy while also making Russia a global cultural and political force again.

Prestige, power and pride have thus been the dominant tone of the Putin mantra, which has been the driving impetus for Russia entering into three separate wars – in Chechnya, Georgia and Ukraine. Western powers haven’t deemed these regional conflicts important enough to begin another Cold War. But if Putin begins to meddle in the Baltic region as he has done in, say, Crimea, the West might have to confront him directly.

This is what makes Kremlin Winter such an appealing read. Service places Putin’s paradoxical political philosophy against the broader backdrop of the shifting contours of a changing international pecking order. The post-Cold War Washington-led global consensus is no longer a guaranteed certainty. Its replacement is a multipolar world of competing nations, where power dynamics, diplomatic protocol and ideology constantly evolve in real time. Putin and his Kremlin cronies have played a central role in orchestrating this monumental historical and political global shift. 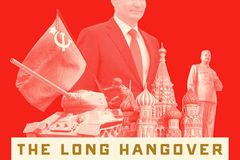