The title of Jerry Howarth’s memoirs, Hello, Friends!, was the greeting the now-retired Blue Jays broadcaster opened the team’s radio broadcasts with for years. Published by ECW Press, the book chronicles his career and covers a good part of the Jays’ history as well. Howarth spoke to The Globe and Mail from his home in Toronto.

I think my favourite seasons listening to you and Tom Cheek were the ones you did with former player Gary Matthews. Were they as fun as they sounded?

They were. I grew up in San Francisco and watched Gary play and bat third for the Giants. We were friends. We just hit it off from the very beginning.

And yet you tell a story in the book about him falling asleep on the air. You actually told the radio listeners that he was sleeping. Weren’t you worried about embarrassing him?

Not me. My attitude was that Gary would love the story. And when it all unfolded, that’s exactly what happened. When he finally woke up and we told him what had happened on air, he laughed the hardest. I knew that would happen.

That’s right. I knew I didn’t want to do a broadcast of statistics. People can read up on that later. I didn’t want that for our audience. When I worked with analysts who were former players, I wanted to highlight them, which meant sharing stories about their careers. I couldn’t control who won or lost, but after the game I wanted somebody to say they enjoyed the broadcast.

And those stories thread through the narrative of the game to keep the broadcast moving along. A play-by-play broadcaster is a storyteller, would you agree?

Sure. I felt an obligation to become a storyteller because I liked the pace of a broadcast. I liked how my discipline and routine and homework lent itself to things other than “ball one” or “strike two.” I wanted to blend in stories that people could retell when the broadcast was over. Remember, the Blue Jays went 22 years without getting back to the playoffs after 1993.

You’ll be remembered for your 23 seasons with broadcast partner Tom Cheek, but you worked with others as well. What’s the secret when it comes to the best broadcast teams?

I’ve always felt the best radio teams are made up of opposites. Tom and I were the classic example of that. We approached the game differently. Our voices were different. I think that serves a radio broadcast, so the audience always knows who’s talking.

What about numbers? One-man, two-man or three-man booth?

A two-man radio team, I think, is ideal. It can be conversational. There can be pausing. I always told my engineer to bring up the crowd noise and the public address announcer, and let that voice become part of the broadcast.

That’s interesting. But I think a one-man booth can only be pulled off by someone like Vin Scully. He was really in a class by himself, though.

In your book, you mention a book of poetry given to you by a former teacher. Poetry is all about rhythm, and isn’t that what calling a ball game over the course of three hours comes down to, rhythm?

You know, I describe myself as an extroverted introvert. People don’t believe me when I tell them that, but it’s true. I’ve done other sports over my career, but baseball suited me the best. I liked the quiet time. I liked the slower pace. Could I call football and basketball? Yes. But not to the enjoyment of the baseball flow, and its nine innings.

It seems like current broadcasters want to fill every space of air when they call games. They like to shout, too.

We all have our own style. For me, it was all about letting the game come to me. There were exciting moments, but during those moments I wanted the crowd to come in. I would be short and sweet with my call. I would let the crowd come in for as much as a minute, letting the noise wash over the listener. That kind of rhythm suited my personality. And I loved every minute of it.​​

So enthusiastic about the game he played for the living, the ebullient Ernie Banks would exclaim “let’s play two” on the day of a ballgame. In that vein, baseball books set for release this spring come to us in pairs, with multiple titles on statistics, 50-year-anniversaries and, yes, Hall of Famer Banks. Let’s read two, shall we?

Analytics: What we used to know about ball-diamond statistics could fit on the back of a baseball card. These days, advanced metrics are all the rage. Breaking things down are blogger Andrew Stoeten with The Numbers Don’t Lie: Advanced Statistics and the True History of the Toronto Blue Jays (out now) and Travis Sawchik and Ben Lindbergh with The MVP Machine: How Baseball’s New Nonconformists Are Using Data to Build Better Players (June 4, Basic Books).

The 1969 New York Mets: Sure, Woodstock was far out, but history tells us that the Mets of the same summer were “amazin’.” Celebrating a so-called miracle that happened 50 years ago are Wayne Coffey, with They Said It Couldn’t Be Done: The ’69 Mets, New York City, and the Most Astounding Season in Baseball History (March 26, Crown Archetype) and Rich Coutinho with The Miracle of 1969: How the New York Mets Went from Lovable Losers to World Series Champions (June 4, Sports Publishing). Both books look at the team against the backdrop of a turbulent era.

Ernie Banks: We’re not sure how it came to be that two similarly titled biographies on the same smiling Cub slugger both received 2019 publication dates, but Doug Wilson’s Let’s Play Two: The Life and Times of Ernie Banks (out now, Rowman & Littlefield) and Ron Rapaport’s Let’s Play Two: The Legend of Mr. Cub (March 26, Hachette) are playing a doubleheader. Although sportswriter Rappaport bills his book as the “definitive biography,” he clearly has some competition. 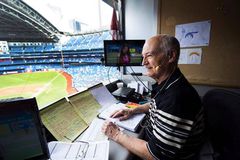 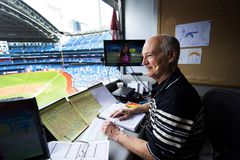 Jays broadcaster Jerry Howarth back to work after health challenges
June 26, 2017
Follow us on Twitter @globebooks Opens in a new window
Report an error Editorial code of conduct
Due to technical reasons, we have temporarily removed commenting from our articles. We hope to have this fixed soon. Thank you for your patience. If you are looking to give feedback on our new site, please send it along to feedback@globeandmail.com. If you want to write a letter to the editor, please forward to letters@globeandmail.com.
Comments