Virtually no one cared about arts managers – the unlicked cubs of the non-profit arts universe – until Calgary's Rozsa Foundation, led by its executive director Mary Rozsa de Coquet, took an interest in seeing that they received professional training.

Rozsa de Coquet, an Order of Canada recipient who's been a fixture at virtually every Calgary arts event – from the Calgary Philharmonic Orchestra (more on them later) to the smallest, independent theatre company to oratorios featuring chamber quartets and homeless people – for decades, is retiring after 16 years at the helm of her family's foundation, and the Calgary arts community won't ever be quite the same.

Rozsa de Coquet, say artists and arts managers whose careers have been boosted by the Rozsa Foundation, is the rare philanthropist: one part Calgary arts champion, one part strategic planner and one part data nerd – a connector who has never hesitated to use her social capital to lobby for the city's arts scene.

"I've worked with her on quite a few projects over quite a few years," says CPO president and chief executive officer Paul Dornian, "and she very much connects the dots in the [arts] community."

"She's creative," he adds, "[Mary], in her own way, is an artist herself … when we sit down and talk about projects, she's not that interested in the same old, same old. She's interested in something that makes lights go on and might be unique or would change the community."

What made the lights go on at the foundation since 2003 has been the Rozsa Award for Excellence in Arts Management, which annually honours an Albertan arts manager with a prize package that includes some cash ($10,000 for the individual, $10,000 for their organization) – and a professional-development and mentorship program developed in collaboration with education partners such as the University of Calgary's Haskayne School of Business and the University of Alberta.

Contemporary Calgary business manager Steven Gallant hasn't won the award, but received professional development from the foundation, and appreciates its systematic approach to filling in the gaps in the arts sector that no one else does.

"Mary," Gallant says, "has had the foresight to look at that aspect of the arts, certainly identified the need to develop administrators … and built this very smartly into this series of progressive courses that are available to up-and-coming or existing arts administrators at all different levels [of expertise]."

2013 Rozsa Award-winner Erin O'Connor started her arts career as a highland dancer, who morphed into running her own dance company, before taking over as executive director of an experimental theatre company (One Yellow Rabbit and the High Performance Rodeo), a newly formed visual-arts coalition (Contemporary Calgary), before being appointed to run the new Calgary Film Centre, a multimillion-dollar production centre (they're currently the production home of Season 3 of Fargo, among other things).

That meant a career that started out with hamstring stretches has somehow morphed into reading blueprints, managing a large, complex, big-budget facility that's part of the city's attempt to diversify its economy and occasionally flying to places such as Los Angeles to pitch Hollywood producers on the merits of shooting multimillion-dollar productions in Southern Alberta.

"The [Rozsa Foundation] Award and the professional and educational training that it afforded me gave me experience in the business of the arts that I could transform from dance to theatre to visual arts to now, the film and TV industry," O'Connor says.

"Mary herself – and the Rozsa Foundation – are a catalyst for business development in the arts," O'Connor adds. "They're consistently rising to challenges and opportunities with their granting initiatives. And they really listen. They provide opportunities."

(That's corroborated by Rozsa de Coquet's fellow Calgary theatre nerd, Mayor Naheed Nenshi, the former board chair of the EPCOR Centre for the Performing Arts: "Not only has the Rozsa Foundation changed the face of arts management in this country forever," Nenshi writes, "[but] Mary herself is a relentless force for good, for change, and for doing things smarter. ")

The foundation reflects the values of its founders, oilman Ted Rozsa and classical-music-loving wife, Lola.

In the early 1980s, Ted dropped by the Calgary Philharmonic's offices to drop off a cheque, to establish a fund that would allow the symphony to hire Canadian classical music superstar Mario Bernardi as its musical director and conductor.

"He pulled out his chequebook and wrote a cheque for $1-million," says recently retired Calgary Opera chairman and CEO Bob McPhee – who was then a young CPO fundraiser. "I don't know if I was 30 [years old], but I'd never seen anyone write a million-dollar cheque! I ran to the bank!"

That cheque was a tipping point for Calgary's arts community to take off – on the cusp of the opening of a new arts centre, which hosted the 1988 Winter Olympic Cultural Festival, Dornian says.

"That was easily the largest donation that the CPO had received to that point in time," he says. "When you get somebody stepping forward and doing something like that, it really changes the dynamic of philanthropy in the community. The bar [for giving] goes up. I give Ted great credit for that one."

The example and principles that started with Ted and Lola Rozsa continue to guide the foundation to this day – and will continue under the guidance of incoming executive director Simon Mallett – an innovative theatre director (Crime Does Not Pay) turned arts philanthropist. (Rozsa de Coquet will remain on the board).

"Their values were always that outward-looking community perspective," says Rozsa de Coquet, who leaves her position as executive director of the Rozsa Foundation on April 17.

"You always help someone, you're always involved in the community, you always worked hard and you always gave your best. And I think," she says, "those are also hallmarks of the foundation and they came directly from Mom and Dad." 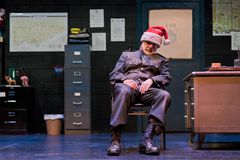